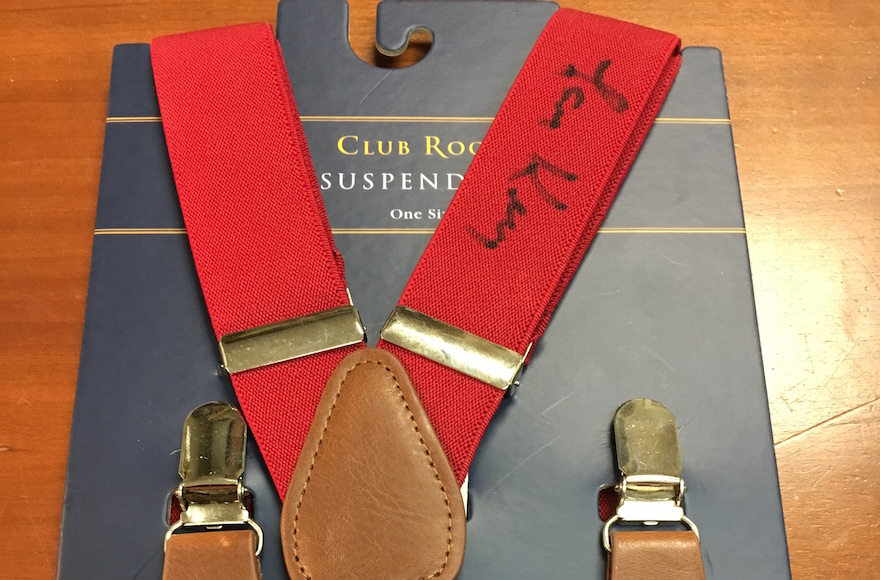 This pair of suspenders signed by Larry King will be auctioned on Dec. 1. (Courtesy of Rubenstein Communications)
Advertisement

(JTA) — A pair of suspenders signed by Larry King will be auctioned off to benefit the American Jewish Historical Society.

King, along with filmmaker Brett Ratner, will be honored at the organization’s Emma Lazarus Statue of Liberty Award Dinner in New York City on Thursday. A pair of King’s signature red suspenders will be sold to the highest bidder at the event.

Current CNN host Wolf Blitzer will present the Lazarus Award to his friend King, who now hosts two talk shows that stream online on Hulu. The honor recognizes an individual or group “whose contribution reflects the highest values of the American Jewish community,” according to a historical society news release. It is named for the Jewish poet who wrote “The New Colossus,” which is quoted on a bronze plaque on the Statue of Liberty. Lazarus’ archival collection is housed at the historical society in Manhattan.

Ratner, who directed the “Rush Hour” movies, will receive the society’s inaugural Visionary Leadership Award for being a “dynamic thought leader in the American Jewish community.”