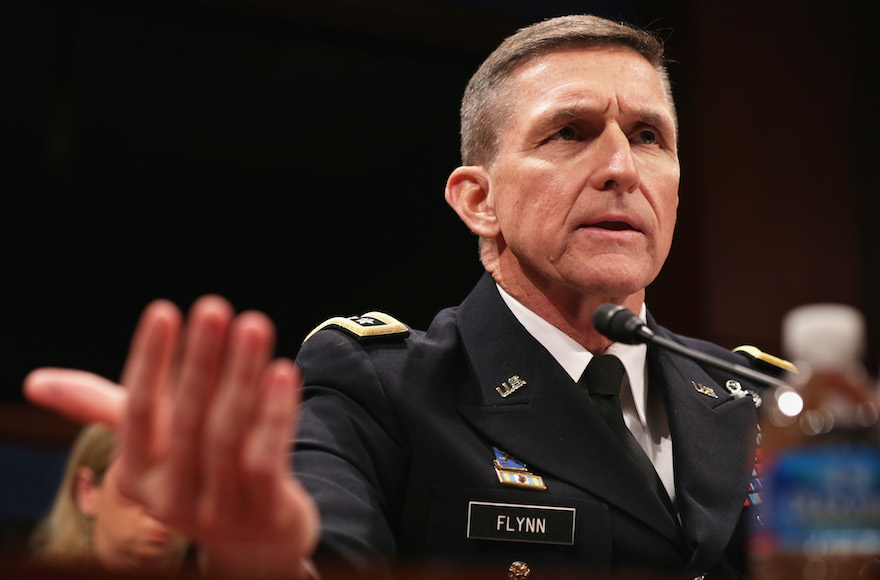 WASHINGTON (JTA) — Four liberal Jewish groups have joined a drive calling on President-elect Donald Trump to rescind the choice of Mike Flynn as his national security adviser, citing the general’s hostility to Islam and his retweeting an anti-Semitic tweet.

“He has written that ‘fear of Muslims is rational’ and said that ‘Islam is a political ideology’ and ‘a cancer’ that ‘hides behind being a religion,’ and continuously peddles the nonsensical fear of ‘Shariah law’ spreading in the United States,” said the letter signed by 53 groups, including J Street, Americans for Peace Now, T’ruah and the National Council of Jewish Women.

“On social media, he shared a blatantly anti-Semitic tweet,” it said, referring to an incident in August when Flynn was attacking Democrats for blaming Russia for stolen emails that embarrassed the party. He attached his comment to a tweet that said: “Cnn implicated. ‘The USSR is to blame!’ … Not anymore, Jews. Not anymore.” Flynn later removed and apologized for the retweet.

Another group signing the letter is the Military Religious Freedom Foundation, which combats religious coercion in the military. The group was founded by Mikey Weinstein, a veteran, after his children serving in the military came under pressure to convert to Christianity.

Also signing were an array of liberal and Christian groups, as well as veterans’ groups. J Street initiated the letter and helped lead the drive to find signatories.