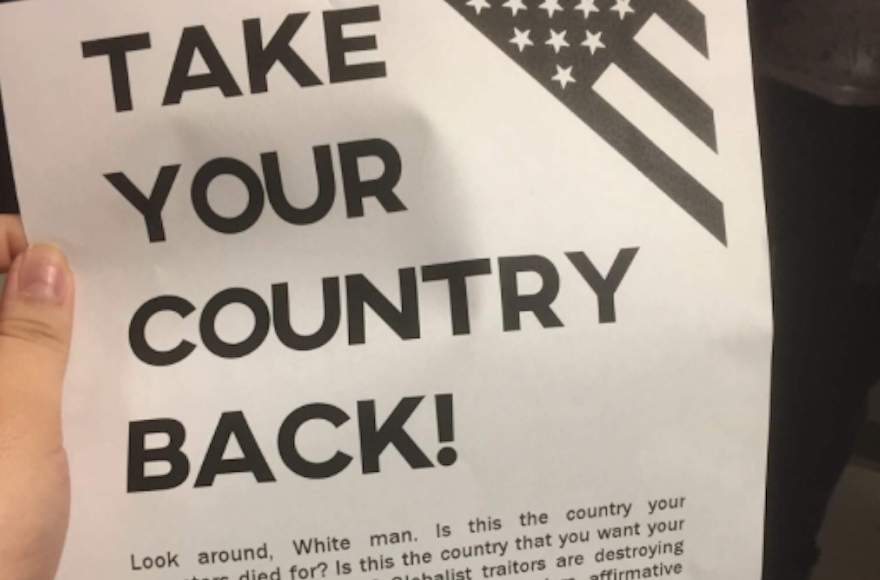 At least seven posters from the American Vanguard organization were found Monday in a lecture hall and a student residence, the local media reported Wednesday.

“The racist and anti-Semitic rhetoric of American Vanguard has no place on our campus as a community that cherishes the diversity of ideas and people acting together in shared interests as a sustaining and core value,” Emerson President Lee Pelton said in an email Tuesday to students.

Pelton said the identity of who hung the posters is not known and the college’s Police Department is conducting an investigation.

“The posters were not put here to propagandize but rather to intimidate and silence,” his email said. “However, we will not be silenced. We will raise our strong voices of protest and our unassailable belief in the enduring power of our common humanity.”

American Vanguard says in the “Manifesto” section of its website that “White America is under attack … While millions of our countrymen languish in poverty and our infrastructure crumbles, our jobs are shipped overseas and billions sent to Israel.”

The group calls for the ” reawakening of White racial consciousness” and for Whites to “fight for America.”

Emerson is a private college of 4,000 students offering courses and degrees in arts and communications.

The posters also have been found on other college campuses.