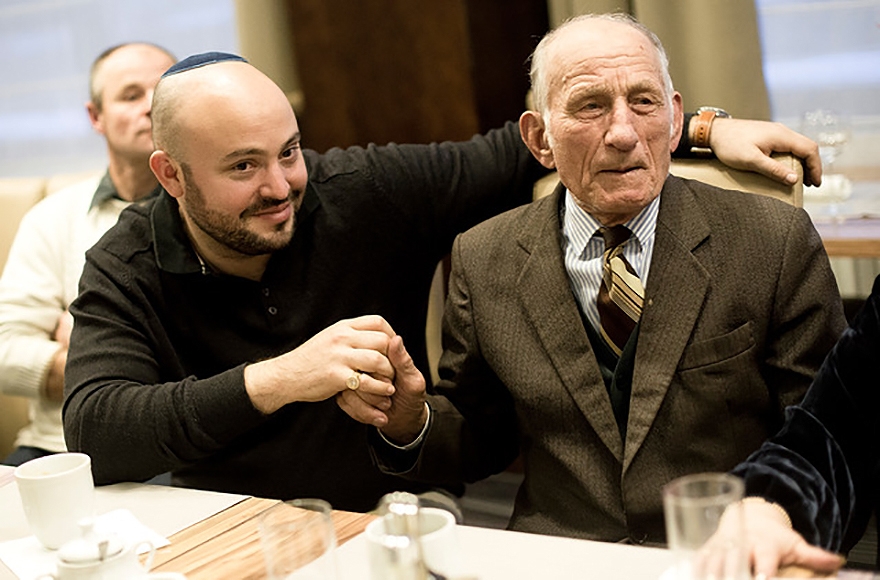 Jozef Jarosz, who saved 14 Jews during the Holocaust, taking a break with Jonny Daniels, left, from filming Jarosz's testimony in Warsaw in November 2016. (Photo courtesy of From the Depths)
Advertisement

(JTA) — Polish and Israeli officials announced the future opening of an innovative museum honoring non-Jews who risked their lives to save Jews from the Holocaust.

The museum, which will feature interactive 3D videos of saviors of Jews, is slated to open in 2018 in the center of Warsaw under the auspices of the TSKZ cultural association of Polish Jewry and the commemoration group From the Depths.

The two groups made the announcement in a statement following a ceremony in Warsaw last month featuring the signing of a letter of intent about the new museum’s establishment.

The event was attended by Poland’s Secretary of State Anna Maria Anders, the deputy speakers of the Israeli parliament and the Polish senate, Yehiel Bar and Adam Bielan, respectively, TSKZ Director Arthur Hoffman and From the Depths founder Jonny Daniels.

Visitors to the museum, which will occupy two rooms inside what will be the new seat of the TSKZ building, will be able to interact with 3D video recordings of the Righteous Among the Nations — a title conferred on Holocaust saviors by Israel — using so-called intelligent software, Daniels said. The questions will be put vocally to microphones and analyzed by voice recognition software that will play the relevant recorded answer.

The software, which is currently in development, will have a bank of dozens of answers to some questions from which visitors can choose.

“As both the righteous and the people they saved leave this world, we are using technology to allow also future generations the privilege of talking to these people, to hear firsthand of the terrible risks they undertook and how they felt about it,” Daniels said.

In March, Polish President Andrzej Duda attended the opening of a museum for saviors of Jews in Markowa, a village in southeastern Poland.

It was the latest in a series of efforts to celebrate this heroism by Duda’s right-wing government. Critics of these efforts, including the Poland-born, American historian Jan Gross, have argued they are excessive and designed to dominate the narrative about the Polish population’s checkered record of action on the Jews during the Nazi occupation of Poland.

Gross is currently the subject of a criminal investigation for allegedly insulting the honor of the Polish nation, a felony in Poland, by telling a German paper that during World War II, Poles killed more Jews than Poles killed Germans.

The author of 2001 book entitled “Neighbors,” Gross triggered a debate about Polish complicity against Jews during the Holocaust by chronicling in that book the massacre of dozens of Jews by their non-Jewish Polish neighbors in the town of Jedwabne.

Polish nationalists are arguing for an exhumation of the victims’ bodies, citing theories, which are not supported by witness testimonies, of German participation in the massacre.

Only 10 percent of Poland’s Jewish population of 3.3 million people survived the Holocaust, in which only a very small minority of Jews were killed by Poles.

Poland has the world’s highest number of Righteous Among the Nations: Some 6,620 have been recognized as such by the Yad Vashem Holocaust museum in Jerusalem.

The country with the second-highest number of righteous is the Netherlands, with some 5,516. German Nazis and Dutch collaborators killed 75 percent of Holland’s Jewish population of 140,000 during World War II.

If Poland had the Netherlands’ ratio of saviors per Jews in 1940, there would have been nearly 120,000 Polish Righteous Among the Nations.