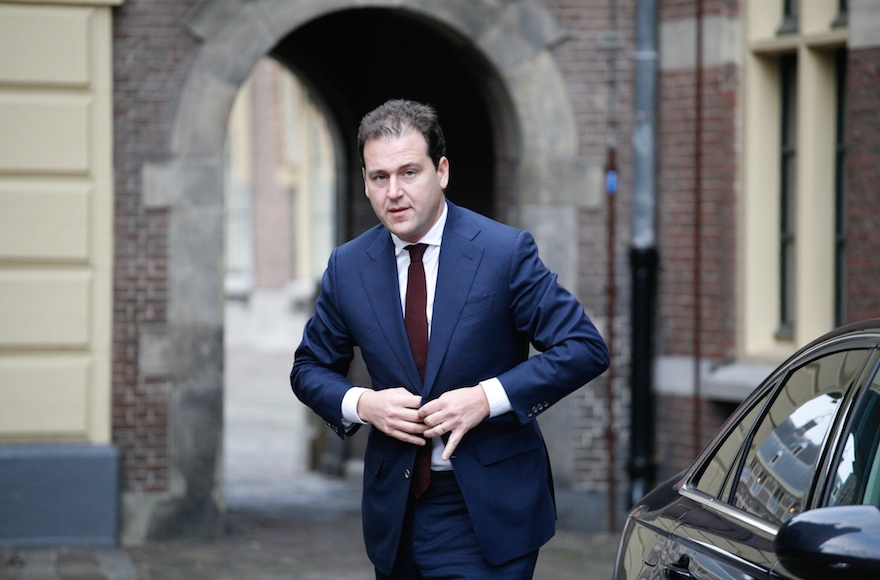 Lodewijk Asscher arriving at the Ministry of General Affairs in The Hague, Dec. 5, 2014. (Jaap Arriens/Pacific Press/LightRocket via Getty Images)
Advertisement

AMSTERDAM (JTA) — Even in a country where hate speech is the subject of intense political and judicial review, Dutch Deputy Prime Minister Lodewijk Asscher’s Facebook post from February about the phenomenon was unprecedented.

Titled “Disrespectful Dog,” the 735-word essay by Asscher, a descendant of Holocaust survivors who last week became Dutch Labour’s candidate for prime minister, featured a compilation of racist insults used against him on social media. Asscher, 42, explained that anti-Semitic attacks over his Jewish roots were causing him to limit his use of Twitter and Facebook.

The text, a sarcastic open letter to online abusers, stood out in a country where the media typically keep out of the private lives of senior politicians — and where politicians, in turn, rarely speak of their ethnicity or religion. The post made the front pages of leading dailies and earned praise for Asscher. The top political commentator of the RTL television and radio broadcaster, Frits Wester, called the post “brave.”

This outspokenness by Asscher, an eloquent yet down-to-earth statesman who used to be deputy mayor of Amsterdam, was key to his comfortable victory last week in the Labour primaries. He ran on a relatively aggressive platform that promised left-wing voters an unrelenting assault on Holland’s rising far right ahead of the general elections in March.

After thanking his predecessor at Labour’s helm, the first goals that Asscher listed in his victory speech were “the need for unity against right-wing politics” and a “progressive and uniting answer to Wilders.” Geert Wilders heads the far-right Party for Freedom, which has emerged as the country’s most popular party in five major voting polls conducted after Nov. 25.

The success of Wilders — an anti-Islam provocateur who on Friday was convicted of incitement for having promised to “arrange” that Holland has fewer Moroccans — is part of a surge of popularity for the far-right in Europe amid fears of home-grown jihadist terrorism.

Wilders “rides a wave of fear and uses societal divisions,” Asscher said in his victory speech on Friday. “But the politics of blame can never be the answer.”

Asscher also referenced the rise of populist causes elsewhere, from the British vote in June to leave the European Union to Donald Trump’s victory in the U.S. presidential election.

“We have four years of President Trump ahead of us, and in our own country, Geert Wilders is ahead in the polls,” he noted.

To be sure, Asscher’s predecessor, Diederik Samsom, is no fan of Wilders and has spoken out against him. But Samsom’s priorities in the government, where Labour is a junior partner to the center-right People’s Party for Freedom and Democracy, have been largely economical and too pragmatic for some Labour voters who see him as overly accommodating to the free-market policies of the ruling party.

“Asscher is more value-driven than Samsom, who some critics saw as focusing too heavily on economic growth charts while the far right was surging,” said Ronny Naftaniel, a Dutch Labour member and a prominent member of the country’s Jewish community. “I think his election enriches the Dutch political system and gives progressive voters a voice through which to express their rejection of extremism.”

In an interview for the NOS television and radio broadcaster, Asscher said, “Wilders needs to be confronted in debates, among voters, not in courtrooms.”

It was a criticism of the general strategy of the mainstream Dutch left wing, which some observers accuse of doing too little to block Wilders.

Whereas Labour has focused on the economy, the Dutch left-of-center Socialist Party has been less enthusiastic about defending multicultural values that are seen as controversial for its working-class voter base. With the ruling party reluctant to bleed rightist votes by picking a fight with Wilders, vocal opposition to his policies fell to smaller parties that are seen as elitist, thereby strengthening his image as the enemy of the elite.

While Wilders’ prominence on Asscher’s to-do list is new, Asscher has consistently been quick to denounce other expressions of hate speech — including against Jews and Israel, Naftaniel said. He noted Asscher’s strongly worded reaction in 2014 to a remark by a Labour member and government-employed cybersecurity expert who said that the Islamic State terror group was a Zionist invention to malign Muslims.

“It made me sick to my stomach,” said Asscher, the senior-most politician to comment on the incident. To Naftaniel, this demonstrated a zero-tolerance attitude in Dutch Labour to left-wing anti-Semitism. And that, Naftaniel added, sets his party apart from its British counterpart under Jeremy Corbyn, who has expressed support for Hamas, Hezbollah and some attempts to boycott Israel.

“Corbyn is a radical,” Naftaniel said of the man whom many British Jews accuse of allowing anti-Israel rhetoric by some party members to morph into open anti-Semitism. “And while Asscher has his [own] values, he is a pragmatist.”

Asscher’s great-grandfather, Abraham, was a leader of the Jewish council set up by the Nazis to control Dutch Jews ahead of their extermination in death camps. He is not the first Labour leader with Jewish roots; former Amsterdam Mayor Job Cohen led the party for two years until 2012.

Whereas Cohen has downplayed his Jewish origins — “I have a Jewish name, and that’s about it,” he said in a 2010 interview — Asscher, who has three sons with his non-Jewish wife, “is more at ease or open to talking about his Jewish roots,” Naftaniel said.

“Many of you possess a keen historical insight,” Asscher wrote sarcastically in that letter, which he addressed to the people who hurl anti-Semitic insults at him online, including those accusing his great-grandfather of collaborating with the Nazis. “You found out that I’m related to Abraham Asscher, who was a chairman of the Jewish council. Chapeau,” he wrote, using a French-language expression for “well done.”

Despite his eloquence, Asscher does not appear to be in an advantageous position to take on Wilders, according to Manfred Gerstenfeld, a former chairman of the Jerusalem Center for Public Affairs, who has authored several books about the Netherlands.

With anti-immigrant sentiment running high and the Dutch General Intelligence and Security Service warning of the “sudden and explosive renewal of Dutch jihadism,” Asscher’s anti-Wilders rhetoric “will likely not change or even address the very real social problems, created by many members of the Muslim minority, that Wilders is pointing out in his populist style,” Gerstenfeld said.

In Dutch politics, the party with the highest number of votes is tasked by the monarch to form a coalition government. The leader of that party usually becomes prime minister.

The scope of Labour’s challenge is visible in recent polls that show Labour trailing Wilders by more than 20 seats, Gerstenfeld said. Asscher’s party is expected to garner approximately 11 seats in Parliament out of 150, compared to the 30 or so seats the polls predict for Wilders’ party.