In the Trump era, imams and rabbis seek a common strategy to counter anti-Muslim hostility 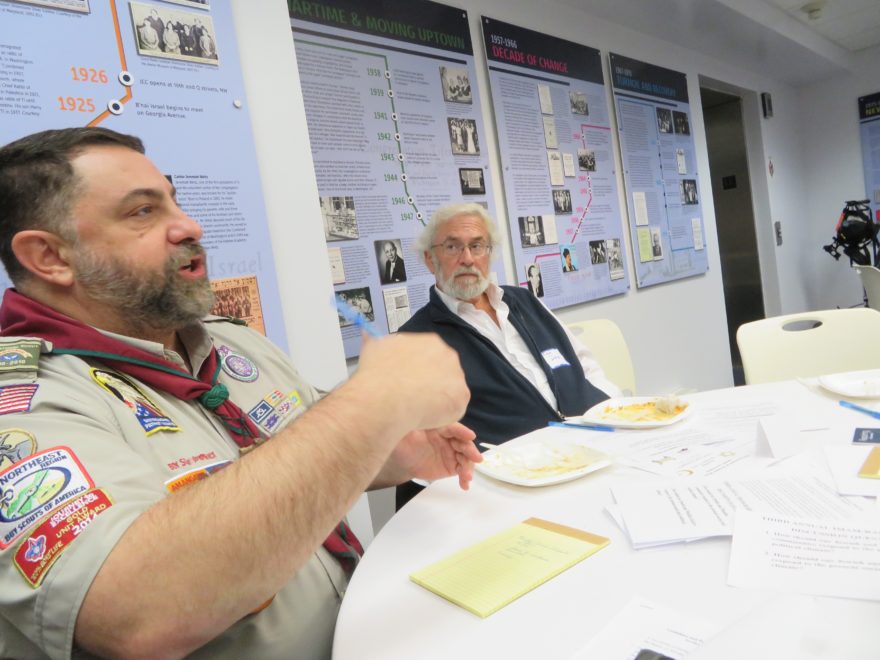 Abdul Rashid Abdullah, of the National American Muslim Association on Scouting, speaks at a Muslim-Jewish gathering in Washington DC on December 11 2016 while Rabbi David Shneyer of Kehila Chadasha looks on. (Ron Kampeas)
Advertisement

WASHINGTON (JTA) – A year ago, when several dozen Washington-area Jewish and Muslim religious and lay leaders jostled for spots in a group picture, the mood was convivial.

The most novel item on the agenda for that November 2015 confab was bringing in non-Middle Eastern Muslims into the Jewish-Muslim dialogue. The meeting and the venue — an Indonesian-American Muslim center in Silver Spring, Maryland — helped “dispel the myth that Muslims are inherently of Middle Eastern descent,” a release said.

On Sunday, the meeting of the third Summit of Greater Washington Imams and Rabbis was better attended – a hundred or so leaders were on hand at Tifereth Israel, a Conservative synagogue in the District of Columbia, about 30 more than last year – and the group picture was just as friendly. But in that anxious “we’re in this together” way.

Following an afternoon packed with tales of Muslims enduring taunts, vandalism and bullying in schools, the host rabbi, Ethan Seidel, sang a Hasidic melody to calm the rabbis, imams and lay leaders as they scrambled into place (“short folks in front!”).

What changed? The name some said they could hardly mention: Donald Trump, the president-elect.

“Think of the rhetoric of a person I won’t name,” said Ambereen Shaffie, a co-founder of the D.C. chapter of the interfaith Sisterhood of Salaam Shalom, addressing the group after the photo shoot.

Shaffie described Thanksgiving break at her parents’ Kansas City home, when all 40 people in her extended family said they encountered hostility in recent months, from bullying in schools, where younger relatives were called “terrorists,” to a fire set on her parents’ porch, to a bullet through the window of a male relative’s home.

She blamed Trump’s campaign, and his broadsides against Muslims, which included what an aide described as launching a database of immigrants from Muslim-majority countries, a ban on all Muslims from entering the United States, a pointed religious-based attack on the family of a Muslim-American Army captain killed in Iraq and Trump’s unsubstantiated claim that he saw “thousands and thousands” of Muslims cheering as the World Trade Center collapsed on 9/11.

Similar tales of harassment and threats against Muslims abounded at the summit, an initiative of several local dialogue groups and the New York-based Foundation for Ethnic Understanding. 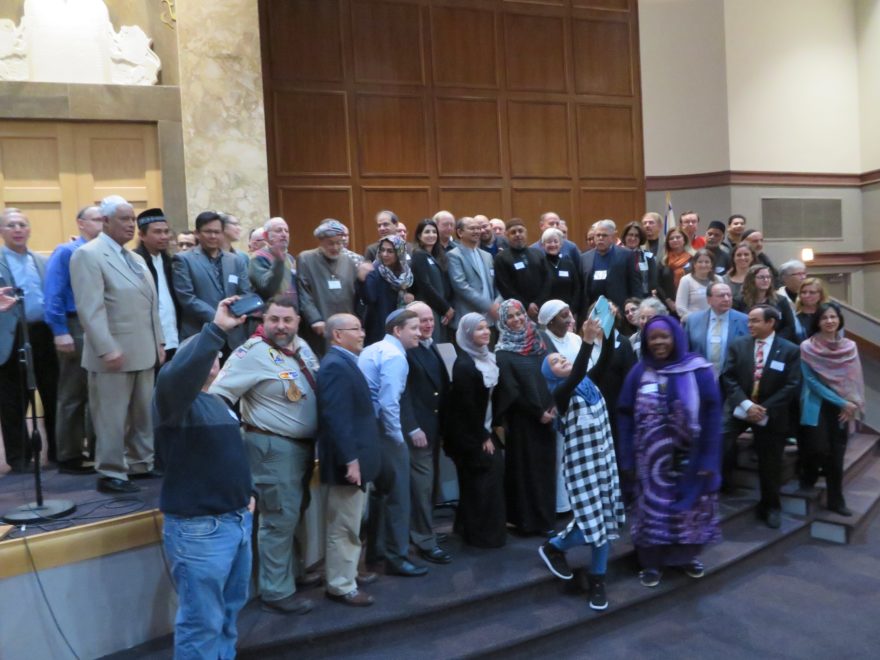 And throughout the event, the Trump impact was often implied, if not explicitly cited.

The first session broke the gathering into lunch groups, and participants found printouts on their tables asking them to discuss how Jews and Muslims should “respond to the present social and political climate.”

“Basically, they want us to react to the results of the last election,” said Dr. Ira Weiss, a physician who is involved in the Jewish-Islamic Dialogue Society of Greater Washington, tossing the printout back onto the table. “Some of what Trump said during the campaign was not only intolerant but dangerous.”

The coming-together, where rabbis and lay leaders represented the spectrum of Jewish religious streams, was “especially significant at a moment of increased bigotry, when both communities are feeling vulnerable,” Seidel said in the release announcing the summit.

Police in Maryland’s Washington suburbs have reported a spike in vandalism, particularly in schools, that invokes Nazi imagery. Nationally, the Anti-Defamation League and the Southern Poverty Law Center have reported an increase in incidents since the election targeting blacks, Muslims, immigrants, the LGBT community and women. The latest FBI hate crimes report showed a 67 percent rise in the number of anti-Muslim hate crimes in the past year.

In the roundtable discussions and in plenary sessions, participants struggled to pin down what they could do to ameliorate the current climate.

Participants described initiatives, like mosque and synagogue twinnings, that began after the terrorist attacks on Sept. 11, 2001, when there was more of a national consensus that Muslims in America deserved protection from counterattacks. But these initiatives had been in place for years and had not prevented the acceleration of anti-Muslim sentiment in the country.

What went wrong? Participants seemed at a loss to understand.

Rabbi David Shneyer said his progressive congregation, Kehila Chadasha, had a post-election meeting with a strong turnout – 50 members from a 100-family community – and that one of its conclusions was to “hold media more accountable.”

“What does it mean, holding media more accountable?” Seidel asked.

“I can’t explain at this point,” Shneyer said.

Some participants said the rabbis, imams and lay leaders needed to break out of their bubbles of mutual affection and travel to the America that had elected Trump.

“We need to reach out to communities where the likelihood of a difference of opinion exists at a higher rate,” said Abdul Rashid Abdullah, representing the National American Muslim Association on Scouting and sporting a scoutmaster’s shirt.

Abdullah said he had been raised a Roman Catholic and converted to Islam when he was 18.

“I came from a household that’s probably supporting Trump,” he said. “By God’s will, I’m not on that route – but I could have been.”

Rabbi Sid Schwarz, a senior fellow at Clal: The National Jewish Center for Learning and Leadership, outlined to the larger group what his lunch table came up with, including volunteering to register as Muslims should Trump make good on his campaign proposal to set up a national Muslim registry. (The ADL’s CEO, Jonathan Greenblatt, proposed the same idea last month at his organization’s plenary in New York.)

But Schwarz also voiced a sense of helplessness that permeated the discussion.

“There’s got to be a more proactive agenda to counter the way Trump has characterized Islam as radical,” he said.

“How do you get out of the vacuum?” a participant asked.

“Reverse freedom rides,” someone else said. “We take our bubble into the hinterlands.”

Some practical ideas emerged, including synagogue members appearing outside mosques during Friday prayers bearing signs expressing support, and setting up volunteer systems that would accompany children to school who had been subjected to harassment there.

Rabbi Jason Kimmelman-Block, the director of Bend the Arc Jewish Action, spurred participants to sign his group’s petition urging President Barack Obama, before he leaves office, to dismantle the National Security Exit-Entry Registration System, an existing structure that Trump could use to facilitate a Muslim registry.

Walter Ruby, the Muslim-Jewish relations director for the Foundation for Ethnic Understanding, said a 10-person steering committee would be chosen from those attending the meeting. Rabbi Gerald Serotta, the executive director of the InterFaith Conference of Metropolitan Washington, circulated an outline of a rapid response system should hate crimes occur. 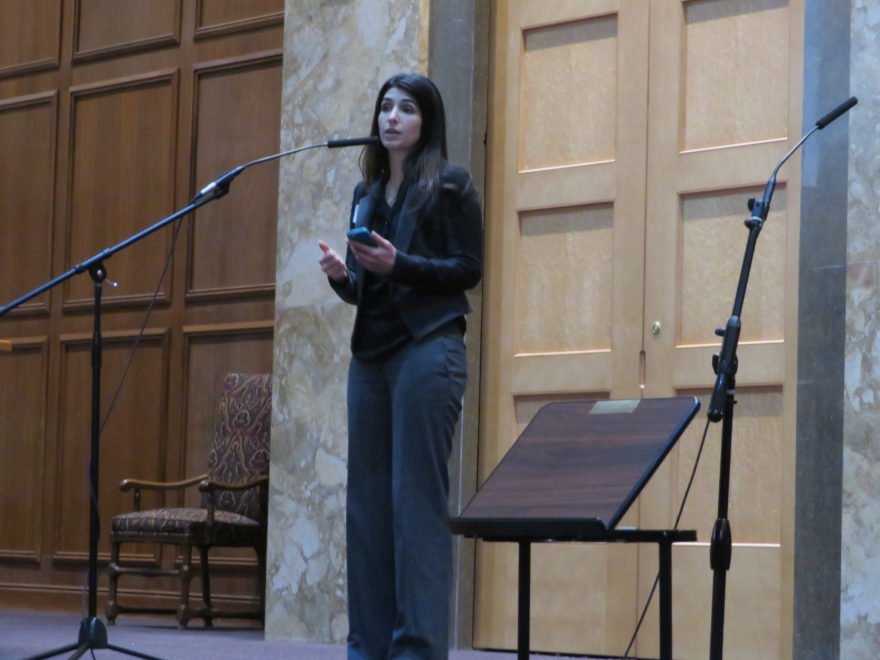 Shaffie said Muslims and Jews should set an example by broadening the current paradigm of “utilitarian” collaborations — joining in legal challenges, for instance — to establish deeper friendships. She described how the women in her group, the Sisterhood of Salaam Shalom, visit each other’s homes “when babies are born, when someone passes.”

“Loving someone else for the sake of God,” she said, is a means of “standing together as protectors, not defined by common victimhood, but a common heritage of dignity and love.”