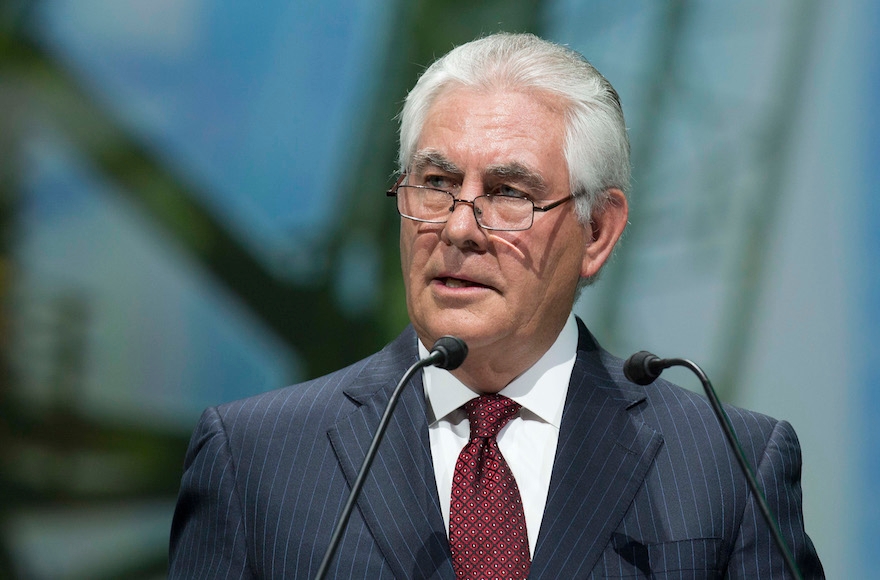 WASHINGTON (JTA) — President-elect Donald Trump nominated Rex Tillerson, the chairman and CEO of Exxon Mobil, who is close to the Russian leadership, as secretary of state.

“Guiding operations around the world that include more than 200 offices, Mr. Tillerson knows how to manage a global organization and successfully navigate the complex architecture of world affairs and diverse foreign leaders,” Trump’s statement said. “As Secretary of State, he will be a forceful and clear-eyed advocate for America’s vital national interests, and help reverse years of misguided foreign policies and actions that have weakened America’s security and standing in the world.”

Tillerson faces a tough nomination fight because of his associations with Russian President Vladimir Putin. He led the expansion of Exxon’s joint drilling with Russia in recent years and has objected to sanctions imposed on Russia because of its invasion of Ukraine. Tillerson in 2012 was honored with the Russian Order of Friendship decoration.

Sen. John McCain, R-Ariz., told NPR on Tuesday that he was withholding judgment on Tillerson. Calling Putin a “thug” for his expansionism in Ukraine and his human rights abuses, McCain, who will be key to getting Tillerson confirmed, said in the interview, “Did he ever raise those issues with Mr. Putin? Is it strictly business?”

Oil companies have in the past clashed with the pro-Israel lobby, in the 1970s over the Arab boycott of Israel and in the 1990s over the imposition of sanctions on Iran.