Benjamin Gilman, who served more than 30 years in Congress, dies at 94 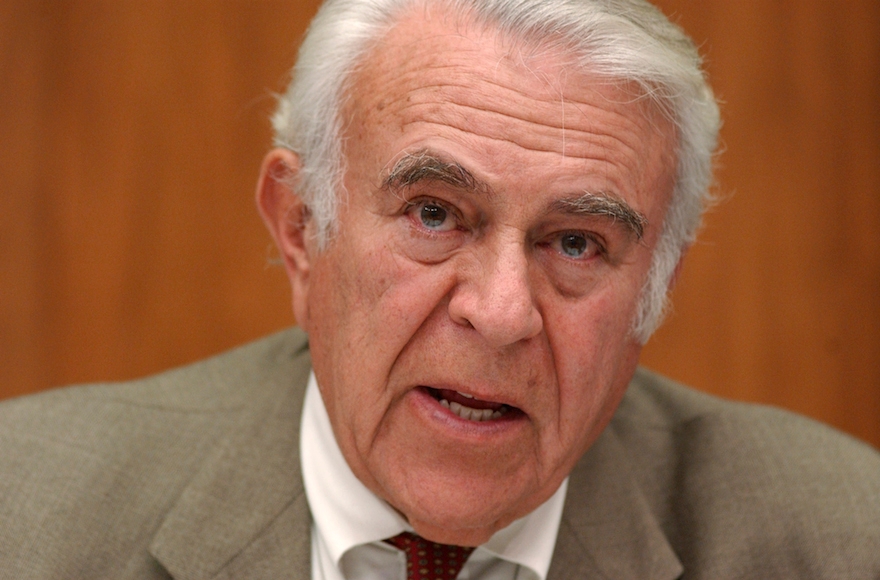 (JTA) — Benjamin Gilman, who served as a Republican congressman from New York for more than 30 years and who was a pro-Israel voice in Congress, has died.

Gilman died on Saturday at a veterans hospital in New York at the age of 94.

Gilman was first elected to Congress in 1972 and served 15 full terms until 2003, representing the lower Hudson Valley area north of New York City. He announced his retirement after redistricting and reapportionment in the wake of the 2000 census would have forced him to run against a sitting Republican.

Gilman’s parents were German Jewish immigrants. In 1933, Gilman accompanied his father to Berlin to persuade an aunt to come to the United States, where he saw Nazi storm troopers marching in the street, according to the Washington Post. The aunt refused to come and later was killed by the Nazis.

Gilman graduated from the Wharton School of Finance at the University of Pennsylvania in 1946 and from New York Law School in 1950. He served in U.S. Army Air Forces and flew 35 bombing missions over Japan, for which he was awarded military medals.

Gilman had a private law practice and served in the New York State Assembly before being elected to Congress.

He was a founder of the House Human Rights Caucus and worked behind the scenes to help free political prisoners, including Natan Sharansky.  In 1994 he became chairman of the House International Relations Committee, now the Foreign Affairs Committee.

Gilman voted to increase aid to Israel during his years in Congress. He took a hard-line approach toward the Palestinians, and spearheaded legislation in 2000 that would have cut off aid to the Palestinian Authority if it unilaterally declared a Palestinian state.

At the time of his retirement, Gilman was the oldest sitting representative in the U.S. House.

When Gilman retired in 2002, admirers recalled how he would set aside Fridays to meet with Orthodox and Russian constituents in Monsey, N.Y., to hear their concerns. “He would hold court,” Joseph Halfon, a longtime supporter and friend of Gilman’s from Rockland County, which is part of Gilman’s district, told JTA. “He was an icon in the community.”