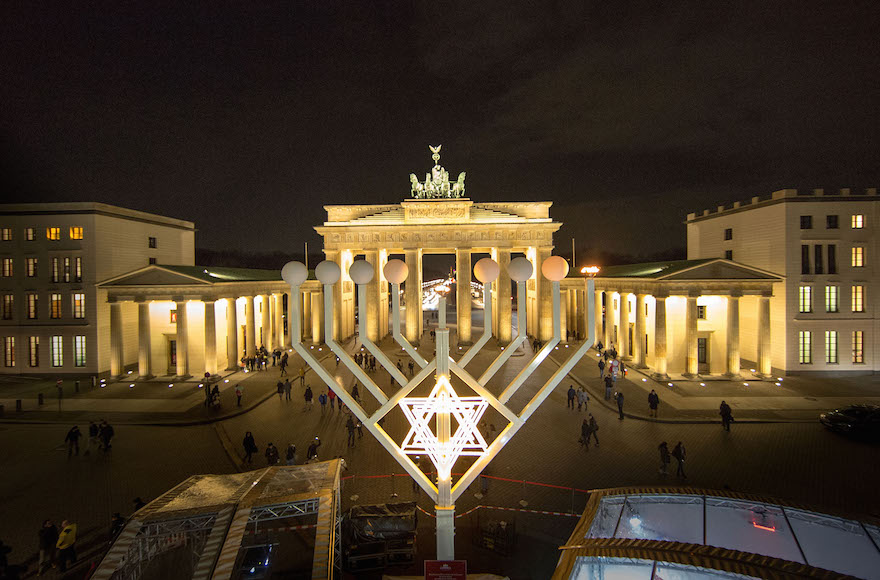 A menorah in front of the Brandenburg Gate in Berlin, Dec. 16, 2014 (Carsten Koall/Getty Images)
Advertisement

AMSTERDAM (JTA) — Before Monday’s attack on a Christmas market in Berlin, Rabbi Yehudah Teichtal had planned to invite hundreds of people to the traditional lighting of the first Hanukkah candle at a large menorah erected at the city’s Brandenburg Gate monument.

But he decided to change his original plan following the attack, whose suspected perpetrator remains at large. The attack killed 12 people, including one Israeli tourist. Her husband was among the dozens injured.

And so, “Instead of one public lighting this Hanukkah, we’re going to have one on each of the eight nights of Hanukkah,” Teichtal, a Chabad rabbi who is part of the Jewish community in Berlin, told JTA on Thursday. “It’s our way of driving out the darkness that is terrorism.”

Teichtal’s determination is shared by rabbis across Europe, including France and the Netherlands, who speak of upholding and celebrating the relatively new tradition of public lightings of menorahs. Some Jewish leaders say that celebrating Hanukkah at central locales in European capitals and cities is considered an appropriate, uplifting Jewish response to the wave of Islamist terrorism hitting the continent.

On Monday, the U.S. Embassy in Berlin recommended keeping “a low profile, and exercising vigilance” and reiterated a State Department travel warning from last month advising to “avoid large crowds.” The warning cited “credible information” of plans by the Islamic State, al-Qaida and their affiliates to carry out “terrorist attacks in Europe, with a focus on the upcoming holiday season and associated events.”

Asked whether he would heed this and similar warnings, Rabbi Mendel Belinow of the heavily Muslim Paris suburb of Saint-Denis replied with a short chuckle.

“We’ve been having public menorah lightings here for the past 25 years, and we’re certainly not about stop,” said Belinow, who like Teichtal is from the Chabad-Lubavitch Hasidic movement. He noted especially the ceremony last year, which took place not far from where police had killed two terrorists just three weeks prior to the Hanukkah event.

“We did it in 2009,” he added, noting that his synagogue was firebombed that year. “In short, we do it on Hanukkah, every Hanukkah, period.”

But not everyone shares his enthusiasm. Several planned events in the Paris region have been canceled this year, Belinow said, over security concerns that increased dramatically following the Berlin attack, which counterterrorism experts fear could encourage copycats.

“Personally, I’m not going to these events,” said Rabbi Moche Lewin, a senior aide to French Chief Rabbi Haim Korsia. “It all depends on the level of security at these events organized by Chabad. If it’s perfectly secured, no problem. But if there’s a danger, it’s certainly imprudent.” Lewin is not a member of the Chabad movement.

Belinow said security was “all in place” for the event Sunday in Saint-Denis, an impoverished municipality that many in France view as a hotbed for extremism following the discovery of several terrorist cells there, including of suspected perpetrators of the November 2015 attacks in Paris that killed 130.

But he also said that he doesn’t “trust anyone — not police officers, not city officials, not the mayor, not journalists. Only Hashem,” a Hebrew word that signifies God.

“We need to do everything to make it happen, because if we start looking for excuses not to, then it’s not only Hanukkah we won’t be able to celebrate,” Belinow said. “We are in the thick of it here in Saint-Denis.”

Back in Berlin, Teichtal said a lot of thought has gone into providing security for the eight public lightings planned at Brandenburg Gate, where for the past 12 years he has been kindling the community’s giant Hanukkah menorah, which is erected there every year ahead of the holiday. It measures about 32 feet in height; Teichtal lights its branches from a crane.

“There are visible security measures and there are less visible ones,” Teichtal said. “We are working with authorities to make sure this is done in the safest manner possible.” 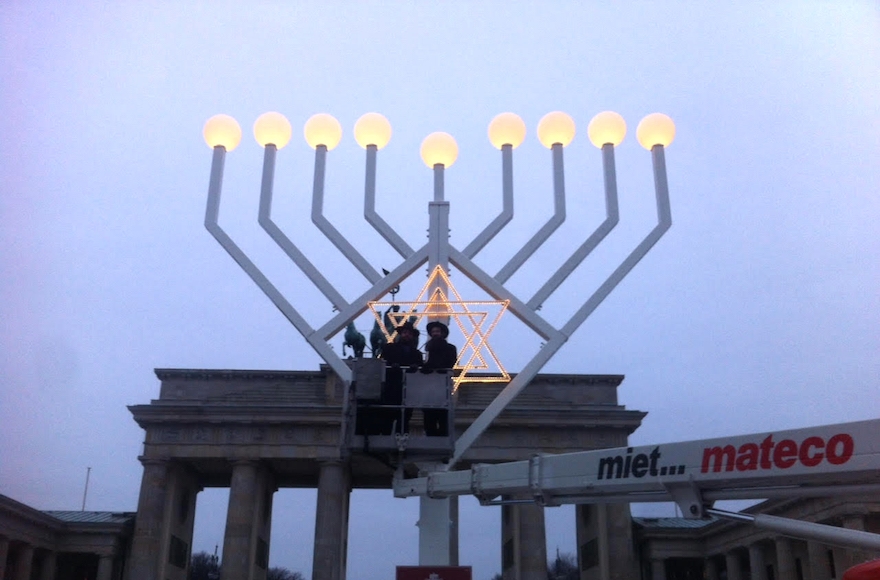 Rabbi Yehudah Teichtal, left, and a colleague testing out a Hanukkah menorah at the Brandenburg Gate in Berlin, Dec. 22, 2016. (Courtesy of Teichtal)

As one of Berlin’s most visited sites, the Brandenburg Gate arguably is not the easiest place in Berlin to hermetically seal against a terrorist attack, Teichtal concedes. But the locale’s history makes it significant for such an event, he added.

“This is the place where Adolf Hitler inflamed his followers with passionate vows to harm the Jewish people, to inflict horrible things on them, as thousands cheered,” said Teichtal, adding that he had the menorah placed at the exact spot at the Brandenburg Gate where the Nazi leader stood during those speeches. “I can think of no better place to demonstrate that the Jewish people is eternal.”

During the lighting of the first candle of Hanukkah on Saturday night at Brandenburg, Teichtal said, a minute of silence will be observed for the victims of the Christmas attack in Berlin.

“My parents had to hide during the Holocaust,” said Dutch Chief Rabbi Binyomin Jacobs, who will mount a crane for the Dec. 28 lighting in front of the famous Peace Palace. “They had to take on fake names and fake identity cards. It’s something I refuse to do for anyone, let alone the barbarians of the Islamic State,” he added when questioned on the wisdom of staging an event that could draw terrorists’ attention.

Hanukkah, a holiday celebrating the defiance of Jews during the Maccabean revolt against the Syrian Greek army, is especially appropriate for such demonstrations, Jacobs said. And the venue in The Hague “makes a statement also about what goes on at the Peace Palace,” he said in reference to the International Court of Justice, which in 2004 ruled that Israel’s West Bank security fence is illegal.

But the Dec. 28 event, he said, is “particularly symbolic because we are standing there with Christian friends, united, bringing light to the fight against enemies and forces who kill indiscriminately, bringing darkness into the lives of Muslims, Christians and Jews alike.”