After Obama, what Netanyahu and his rivals expect from a ‘new era’ 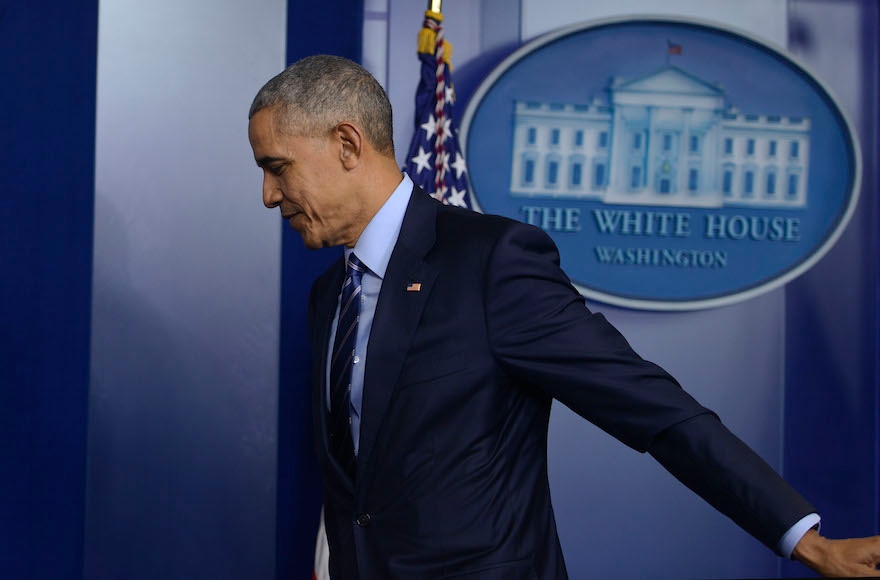 He said as much at a Hanukkah candle-lighting ceremony Saturday, where he addressed the United Nations Security Council resolution passed a day earlier against Israeli settlements in the West Bank and eastern Jerusalem that the Obama administration declined to veto.

“The resolution that was passed at the U.N. yesterday is part of the swan song of the old world that is biased against Israel, but, my friends, we are entering a new era,” he said, mixing outrage with hope. “And just as President-elect Trump said yesterday, it will happen much sooner than you think.”

Trump has publicly given Netanyahu reason to be optimistic, at least on his terms. Shortly after the resolution passed by a vote of 14-0 with the U.S. abstaining, the president-elect tweeted: “As to the UN, things will be different after Jan. 20,” when he will become president.

His pick for ambassador to Israel, David Friedman, told a Jerusalem rally in October, ahead of the U.S. presidential election, “The Trump administration will never pressure Israel into a two-state solution or any other solution that is against the wishes of the Israeli people.”

If Netanyahu and Friedman are right, Israel’s government could soon find itself with a freer hand than ever in dealing with the Palestinians. That government reflects how far the spectrum has shifted rightward in decades of failed Israeli-Palestinian peace talks, Israeli-Arab wars, Palestinian terrorism, Middle Eastern chaos and Israeli settlement building since the Labor Party led Israel into the Oslo peace negotiations with the Palestinians in 1993.

While the diminished left wants to try harder to reach a negotiated peace deal leading to a Palestinian state alongside Israel, the two mainstream approaches to the Palestinians come from what could now be called the center-right — maintain a version of the status quo — and the center, which favors unilateral withdrawal from much of the West Bank.

Meanwhile, Israel’s empowered and vocal right wing supports the annexation of large parts of the West Bank. On both the political extremes, there is support for various versions of a single state for Israelis and Palestinians, and there are many positions in between.

Netanyahu avowedly supports the leftist position of a negotiated two-state solution. But many say his demanding conditions for the Palestinians make him a de facto center rightist on the issue, and he has expressed support for the approaches of the right and even the center left. Here is a survey of the Israeli political map when it comes to the “Palestinian problem.” 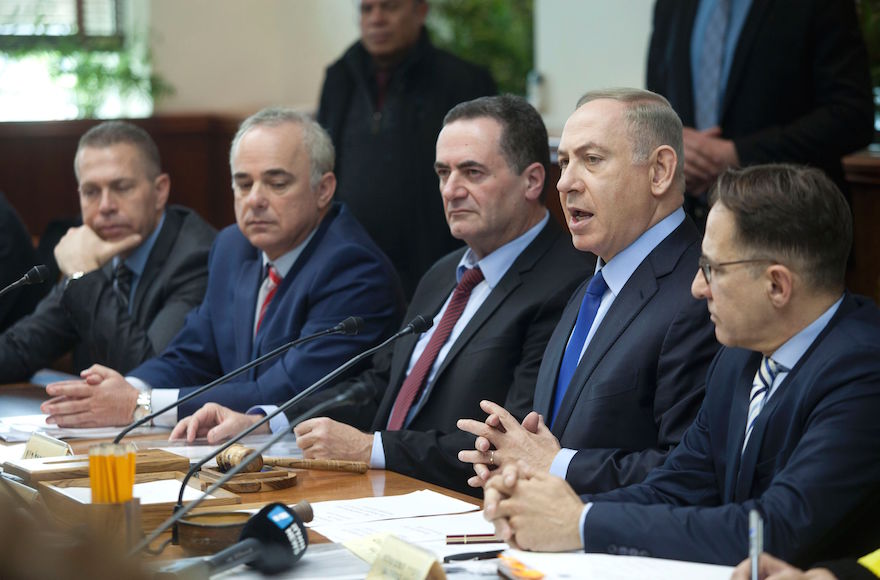 The center-right view on the Palestinians, rooted in the moderate wing of Netanyahu’s ruling Likud party, is that the state should guide settlement growth and keep its army in the West Bank for the foreseeable future. Most of the world views Israeli building in the West Bank and eastern Jerusalem as illegal and an obstacle to the creation of a Palestinian state. But Israel has always rejected Palestinian claims to Jerusalem, which it claims as its united capital, and reserved the right to build there and on public land in the West Bank.

Former Defense Minister Moshe Yaalon laid out a version of this view in a Foreign Affairs essay published online earlier this month.

“Palestinian reluctance to recognize Israel’s right to exist as the nation-state of the Jewish people,” not settlements, was the primary obstacle to peace, he wrote.

Unilateral withdrawal, though appealing, was not a solution, Yaalon said, because the Palestinians are dependent on the Israeli economy and infrastructure, and Israel needs to maintain military access to the West Bank. “Separation” would trigger an economic and political crisis in the West Bank and threaten the security of Israel and Jordan, he said.

Yaalon suggested that Israel work with others to promote Palestinian economic growth, infrastructure development and good governance while maintaining security cooperation with the Palestinian Authority. These efforts eventually “could lay the groundwork for a true peace rooted in mutual recognition and responsible cooperation,” he said.

He also urged the government to make clear it does not build outside existing settlements and opposes “large-scale annexation of the West Bank and Gaza.”

Avigdor Liberman, who was appointed defense minister at Yaalon’s expense in May, has similarly spoken of developing the Palestinians’ infrastructure and economy, and even of limiting settlement building. Last month, the head of the hawkish Yisrael Beiteinu party told reporters that Israel should make a deal with the Trump administration to build in the major settlement blocs even if that meant freezing construction outside them. But after coming under withering criticism from the right, he downplayed the suggestion.

The idea of unilateral withdrawal that Yaalon argued against has been taken up in recent years by centrist Israeli politicians, most notably in the Labor and Yesh Atid parties, both of which are in the political opposition.

In February, Labor unanimously voted to shift its official strategy to separating from the Palestinians. A month earlier, Isaac Herzog, the head of Labor and the opposition, laid out the plan in a speech at the International Security Studies think tank in Tel Aviv, saying a two-state solution was no longer possible under the current conditions.

“I wish to separate from as many Palestinians as possible, as quickly as possible. They over there and we over here; we’ll erect a big wall between us,” he said.

Yair Lapid, the leader of Yesh Atid, who wants to be prime minister and whom polls show challenging Netanyahu for the job, has called for a unilateral Israeli pullout from parts of the West Bank. At a news conference with foreign journalists in January, he said, “The details may be complex, but the basic idea is simple – Israel doesn’t want to absorb 3.5 million Palestinians [in the West Bank]. It is time to separate and guarantee our future as a Jewish and democratic state.”

Amos Yadlin — the former head of military intelligence in the Israeli army and the proposed defense minister for the Labor-dominated Zionist Union, which came in second in the 2015 election — has also advocated unilateral withdrawal to behind the West Bank security barrier in coordination with the Palestinian Authority after another attempt at negotiating peace. Recommending Israel hold onto the large settlement blocs and keep military control of the Jordan Valley, Yadlin said withdrawal was preferable to the “status quo.”

The 2014 strategic assessment of the Institute for National Security Studies, which Yadlin leads, explained that the move “would reverse the current trend that makes a separation increasingly hard to implement” and head off Palestinian attempts to delegitimize Israel that could culminate in pressure “for a single Arab-majority state between the river and the sea.” 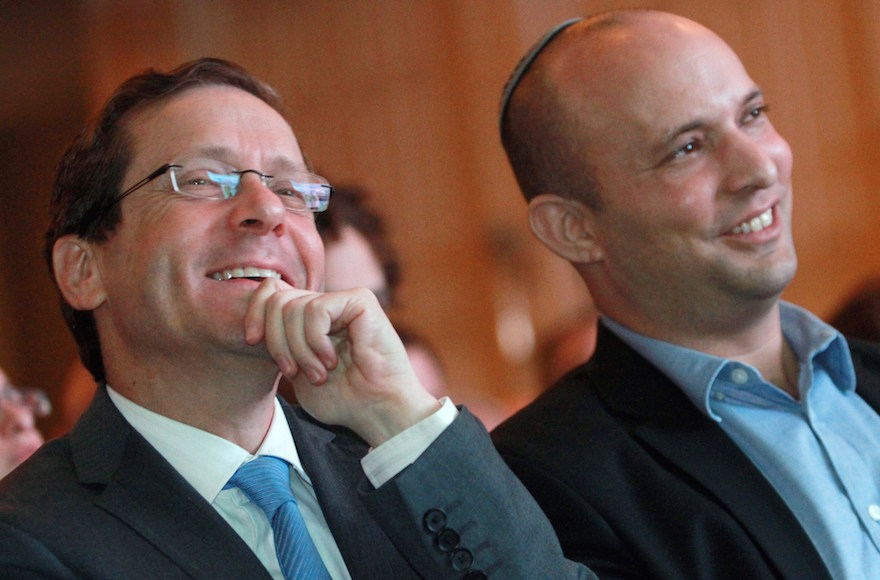 A growing number of politicians on the Israeli right —  especially among hard-line members of Likud and the pro-settlement Jewish Home party, which is part of the governing coalition — want to annex large parts of the West Bank. Supporters of this view have been emboldened by Trump’s election in November and were enraged by Friday’s resolution.

Education Minister Naftali Bennett, the head of the pro-settler Jewish Home party, declared the morning after Trump’s win: “The era of a Palestinian state is over.” On Sunday, Bennett said Israel must use the resolution to move forward with his proposal to annex the some 60 percent of the West Bank under full Israeli control, starting with the large settlement of Maale Adumim.

Several other government ministers, including some members of the prime minister’s party, have also spoken out in favor of annexation since the resolution was passed. Likud Public Security Minister Gilad Erdan said, “We should make an effort to cut off all funding to the U.N. We should announce the immediate annexation of the settlement blocs. … We should renew construction throughout the land.”

In a 2014 article in The Wall Street Journal, Bennett explained that his plan would grant full Israeli citizenship to the Palestinians living on the land to be annexed and let Palestinians in the rest of the West Bank govern themselves under what he has called “autonomy on steroids.” He also called for the dismantling of all roadblocks and checkpoints, as well as the security barrier, to “allow Palestinians complete freedom of movement” and taking steps to grow the West Bank’s economy.

“Annexing Area C [the West Bank areas under full Israeli control, where the settlements stand] would limit conflict by reducing the size of the territory in dispute, which would make it easier to one day reach a long-term peace agreement,” Bennett said. “Annexation would also allow Israel to secure vital interests: providing security for Jerusalem and the Gush Dan region along Israel’s central coast, protecting Israeli communities within Area C, and applying Israeli sovereignty over national heritage sites such as the Cave of the Patriarchs in Hebron, the burial place of Abraham, Isaac and Jacob.”

Critics charge that Bennett’s solution is just another version of the one-state solution, only with Israel ruling a restless, stateless population.

The only Jewish party on the left holding high the torch of negotiations with the Palestinians is Meretz, which squeaked into the Knesset in 2015 with the fewest number of seats. Meretz chairwoman Zahava Galon on Friday was one of the few Israeli voices to welcome the resolution against the settlements.

In a 2013 speech at the annual conference of J Street, the dovish American pro-Israel lobby, she said separation from the Palestinians was not enough. Galon called for Israel to negotiate a two-state solution with the Palestinians based on recognition of their claims to the West Bank and eastern Jerusalem, and to resettle settlers “into the internationally recognized borders of the State of Israel.”

The right and center insist that the two-state solution is a non-starter as long as the Palestinians refuse to recognize Israel as a Jewish state or relinquish the “right of return” for Palestinians who were displaced from their homes during Arab wars with Israel.

The Arab Joint List, now the third largest political grouping in the Knesset, wants Israel to pull its army and settlers out of the entire West Bank and eastern Jerusalem to make room for a Palestinian state there. It also demands the release of all “political prisoners” and the “right of return.”

Arab-Israeli parties have never joined the governing coalition, though during Oslo they propped up then-Prime Minister Yitzhak Rabin from the opposition.

Joint List head Ayman Odeh told JTA in September: “We are still not ripe to be part of the coalition. But if it will be dependent on us if the right will go back to government or not, we cannot sit on the sidelines. Is this answer enough?”