PARIS (JTA) — It’s a vague childhood memory, but the French celebrity philosopher Bernard-Henri Levy still remembers the first time he was bullied for being Jewish.

“Three idiots in a Paris play yard tell me: ‘You don’t get to have Christmas presents because you’re a dirty Jew and Jews killed Jesus.’ Maybe I cry a bit on the street later, but first I start hitting,” the 68-year-old Levy, who was born in what is today is Algeria but grew up in France, recalled in an interview earlier this month with JTA.

More than half a century later, Levy — a slender man with wavy, gray hair who is one of France’s most recognizable individuals — is still embracing his Jewish identity and confronting anti-Semites.

But since that childhood incident, Muslim extremists have taken anti-Semitism in France from schoolyard taunts to terrorism, with multiple deadly attacks on Jewish targets.

This “return of anti-Semitism,” Levy said, “perhaps” prompted him to pen one of his most Jewish books ever, “The Genius of Judaism.” The English-language translation will be released next month in the United States, and Levy will do a Q&A (with Charlie Rose) at the 92nd Street Y in New York on Jan. 11.

In the book Levy, a non-observant Jew, traces the Jews’ “misunderstanding with the nations” to their definition as a “chosen people.”

Far from suggesting superiority, Levy writes, this status means that Jews are the guardians of a “treasure of knowledge” found in sources that Levy has studied for decades: the Talmud and the sages like Rashi, Rambam and the Malbim. Much of the book is devoted to his musings about their writings, as well as reflections on his own past.

“The Genius of Judaism” is one of most personal books ever penned by Levy — an influential, poker-faced intellectual who neither smiles much during interviews nor engages in small talk. The book “in a certain manner sums up my life, holds the key to my endeavors and traces the roots of my worldview,” he told JTA at a video editing studio in Paris, where he is preparing a documentary about Iraq.

In the book, Levy advocates a definition of Judaism that emphasizes “work, not belief. Study, not worship,” he said.

Unlike his role as a moral authority on current affairs – Levy has made several high-profile trips to conflict zones, arguing for humanitarian intervention — “The Jewish element in me, it does not live in this time or the other,” he said.

An outspoken advocate of Israel and prominent supporter of the fight against anti-Semitism, Levy is among several well-known French Jewish intellectuals — along with philosopher Alain Finkielkraut and historian Georges Bensoussan – who have come under attack recently from the far left, particularly in a secularist society where many resent ethnic and religious affiliations.

Not that Levy minds.

“I was always proud to be Jewish,” he said. “I always believed it was a source of glory, never anything to question or be ashamed of. Let them call me what they want.”

In France, Levy is revered by some and hated by others in part for his influential activism in conflict zones, including his perceived key role in bringing about France’s intervention in the former Yugoslavia and Libya, according to a 2014 documentary about him by the France 2 television channel. His support for Israel has not earned him many fans.

Vilified by nationalists and conservatives who resent his humanist agenda, he is also assailed by radical leftists, who accuse him of serving neo-colonialist governments that they say are seeking pretexts to invade foreign countries.

So intense is the hatred of Levy in certain quarters that in 2010, Le Figaro published an article analyzing the sentiment. Titled “BHL, France’s most hated darling,” the story referenced countless death threats online, accusations of corruption and conspiracy theories.

Levy insists that the considerable antagonism he provokes, particularly among left-wingers, is “primarily over support of Israel,” he said.

Despite his vocal criticism of its settlement policy, Levy has consistently defended Israel. In a 2010 speech in Tel Aviv, he said of the Jewish state and its military: “I have never seen such a democratic army, which asks itself so many moral questions. There is something unusually vital about Israeli democracy.”

Levy said he also holds Israel to a high moral standard for this reason. Israel’s “indifference when it comes to refugees from Syria didn’t measure up to the stature of a Jewish state,” he said, adding that President Barack Obama has a “crushing responsibility” for the humanitarian disaster there.

Levy, who with his two siblings sold their late father’s wood-import empire for an estimated $155 million in 1997, has used his wealth to become one of France’s most talked-about personalities, producing films, books and publications, including the La Règle du Jeu cultural review magazine that he launched in 1990. BHL — as he is known locally — has also made countless appearances on French talk shows and used his fortune and celebrity to leave a remarkable impact on international politics. 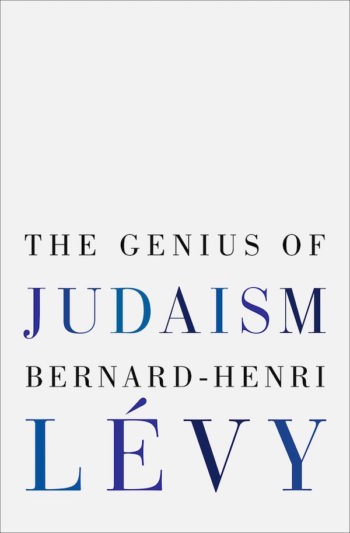 “The Genius of Judaism” by Bernard Henri-Levy (Random House)

In 2011, he toured Libya with private security guards to chronicle the bloody ouster of its longtime tyrant Moammar Ghadafi. With a single phone call, Levy arranged for rebel leaders to meet then-French President Nicolas Sarkozy. Levy flew them to Paris at his own expense — about $160,000 — according to France’s Channel 2.

Weeks later, France intervened militarily in Libya, effectively ending Ghadafi’s 42 years in power. Levy was with Sarkozy on stage when the president delivered a speech in Benghazi after Ghadafi’s fall.

Famously, Levy — a former Maoist whose father was a decorated fighter in the Allied invasion of Italy — was filmed giving an interview in 1992 to a journalist in Sarajevo under mortar fire. During that visit to the former Yugoslavia, he arranged for then-French President Francois Mitterrand to visit the besieged capital, paving the way for the return of U.N. peacekeepers there.

In 1993, a suspension of air traffic left Levy stranded in Sarajevo on his wedding day. So Mitterrand sent a plane to extract him and bring him to his bride, actress Arielle Dombasle, according to France 2. He and Dombasle, his third life partner, are still married despite reports that he was seeing other women.

In addition to Levy’s influence on women, “He has such a powerful gravitational force that even the president likes, perhaps even wishes, to work side by side with Bernard-Henri Levy,” Bernard Kouchner, a former foreign minister of France, said in the Channel 2 documentary. “It’s a great talent he has had, to persuade those in power.”

But some critics of Levy are irked primarily by what they regard as his vanity, which they perceive in his trademark white collar shirt — it is typically unbuttoned nearly to his navel during public appearances.

“Sometimes his views are consumed by his personality,” Anne Sinclair, a well-known French television journalist, told France 2. “Seeing that black suit with the white shirt in the dunes of Libya … I, too, find it annoying.”

But, Levy says, “A vain person puts him or herself ahead of others. Honestly, I think a substantial part of my life was spent doing the opposite. Putting myself behind others, sometimes while risking my life.”

In “The Genius of Judaism,” Levy recalls some of these adventures — including his reluctance to leave the relative safety of his hotel room in war-torn Sarajevo. Years later he would return to that moment, relating the experience to the reluctance of the biblical prophet Jonah to preach.

And he revisits his disillusionment following the rise in fundamentalism, which dashed his hope in 1979 that he was “at the apogee of the age in which God had died,” he writes. “It had been beautiful. It had been huge.”

Suspicious of worship, Levy said he has nonetheless striven to imbue his daughter and son — novelist Justine, 42, and lawyer Antonin-Balthazar, 36 — with Jewish values and culture.

“I did not enroll them to Jewish schools,” he said, “but I hope they will follow my travel itinerary from the secular world to the treasure of Jewish wisdom.”