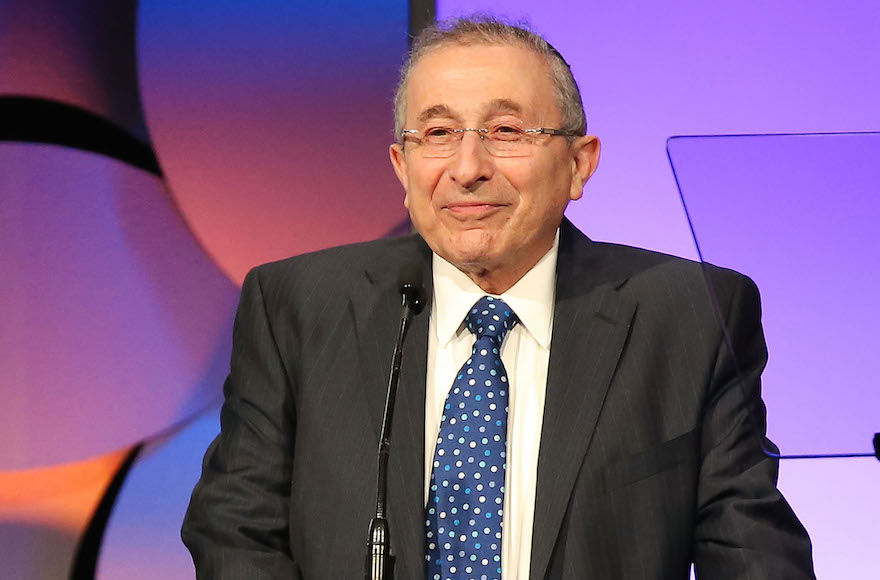 LOS ANGELES (JTA) — Rabbi Marvin Hier has known Charles and Seryl Kushner — Jared Kushner’s parents and Donald Trump’s in-laws — for decades. The Hiers and the Kushners have gone to the same kosher for Passover resort, the Arizona Biltmore, over the years. The Kushner family, prominent real estate developers, have also been generous donors to the Simon Wiesenthal Center founded by Hier, for which he now serves as dean.

But the Los Angeles-based Hier said he was shocked three weeks ago when a Trump aide invited him to offer a prayer at the presidential inauguration. The 77-year-old rabbi said he accepted immediately because “it was the menschlichkeit thing to do,” using a Yiddish word meaning honorable, “and I am proud to do it.”

Hier said his participation is in line with previous blessings he offered to a bipartisan array of presidents and presidential candidates over the past three decades, though never as part of inaugural festivities.

Critics within the Jewish community, however, insist that this time is different — saying Trump’s presidential campaign targeted minorities and at times invoked tropes that many, including the Anti-Defamation League, considered anti-Semitic. The Wiesenthal Center’s own 2016 report on global anti-Semitism noted that a prominent group of neo-Nazis has embraced Trump and that Jewish journalists critical of the Republican presidential candidate were frequently targeted with anti-Semitic tweets.

Hier said the response to his selection has been mostly positive, and that he has gotten calls of congratulations from leaders of mainstream Jewish organizations, though he would not say which ones. However, the rabbi also acknowledged receiving about a dozen letters and emails criticizing his decision to speak at the inauguration.

In addition, an online petition pressing Hier to cancel neared 2,000 signatures by midday Thursday, three days after it was first circulated.

Ezra Fishman, a 29-year-old observant Jew who signed the petition after seeing it on a friend’s Facebook page, said he would usually support the idea of a religious leader offering a blessing to an incoming president, regardless of political party. Just not in the case of President-elect Trump, whose campaign, Fishman said, has “made explicit appeals to bigotry and mainstreamed a lot of voices that both parties had really rejected for a long time.”

“Rabbi Hier is probably one of the most well-known Jewish leaders in fighting bigotry and promoting tolerance,” Fishman, a health researcher in Philadelphia, told JTA. “I would hate to see his name associated with the Trump inauguration because I think it would be understood as the rabbi giving his imprimatur on a lot of things Trump has said and done, to say nothing of things he has given voice to, like the ‘alt-right.'”

The alt-right is a far-right movement widely associated with white nationalism, anti-immigrant sentiment, anti-Semitism and antipathy for the culture of political correctness. In November, Trump said he “disavows” the movement after one of its most prominent proponents, Richard Spencer, delivered a racist and anti-Semitic address at a Washington, D.C., rally in support of the president-elect.

Hier said he has never met or spoken with Trump, but that the real estate magnate visited the Museum of Tolerance, the educational arm of the Simon Wiesenthal Center, on Dec. 7, 1999. Named for a famed Nazi hunter, the Los Angeles-based Wiesenthal Center is an NGO with the stated purpose of teaching about the Holocaust, confronting hate and promoting human rights. (Emails to the Trump transition team asking how Hier was selected to participate in the inauguration and to confirm Trump’s museum visit were not immediately returned.)

Another prominent rabbi, Haskel Lookstein, faced a similar outcry last summer when he agreed to give an invocation at the Republican National Convention in Cleveland, where Trump secured his party’s nomination. Lookstein, the rabbi emeritus at Congregation Kehilath Jeshurun and former principal of the Ramaz Orthodox day school, both in Manhattan, ultimately decided against speaking at the convention after facing a storm of criticism, including a petition led by Ramaz alumni.

In 2009, Lookstein oversaw the Orthodox conversion of Trump’s daughter Ivanka in advance of her marriage to Jared Kushner.

Tax returns show that the Charles and Seryl Kushner Family Foundation donated $35,000 in recent years to the Simon Wiesenthal Center. Hier is among the scholars-in-residence at the Arizona Biltmore Passover program, where guest reservations this year run $13,600 a couple for eight days, according to the kosher travel company Leisure Time Tours. The Kushner family is said to have been Passover guests at the Biltmore, in Phoenix, in years past.

Hier said he would not be swayed by petitions.

“They are not going to change my mind,” he said, noting that while he did not agree with everything Trump did in the course of the campaign — proposing a registry for all Muslims, for example — the presidential inauguration is a time for all Americans to celebrate the peaceful transfer of power.

“There are no tanks, no planes, no guns and that’s the way it is, so I was deeply honored and I accepted,” he said.

The rabbi said it’s in the interest of all Americans to “pray and hope that Donald Trump is a great president.” So far he’s optimistic. Hier has publicly criticized the Dec. 23 United Nations Security Council’s censure of Israel over settlement expansion, which the Obama administration failed to block and Trump, by contrast, vehemently opposed.

Hier noted that Bill and Hillary Clinton, Jimmy and Roslyn Carter, and George W. Bush and Laura Bush have confirmed that they, too, would attend Trump’s inauguration.

“Even people who fought each other bitterly during the campaign are all going to be present on the platform,” he said.

Hier said that regardless of his role at the inaugural, the Wiesenthal Center would not hesitate to call out anybody who crosses a line, regardless of politics or personal relationships.

Though he would not share exactly what he planned to say at the inauguration, Hier said his blessing would be influenced by Joseph B. Soloveitchik, a 20th-century modern Orthodox rabbi who, according to Hier, “modeled marrying traditional Judaism with the modern world — no one did it better.” One idea that Hier said he hoped to convey in his prayer is “that man is God’s partner, that God doesn’t do all of the work.”

Hier is among six faith leaders to accept an invitation from the Trump camp to participate in the inauguration. The others include Cardinal Timothy Dolan, the archbishop of New York, and Franklin Graham, a prominent Christian evangelist. Hier is believed to be the first rabbi to speak at a presidential inauguration since 1985.