Israel’s chief rabbis embrace friendlier approach to marriage, but is it enough? 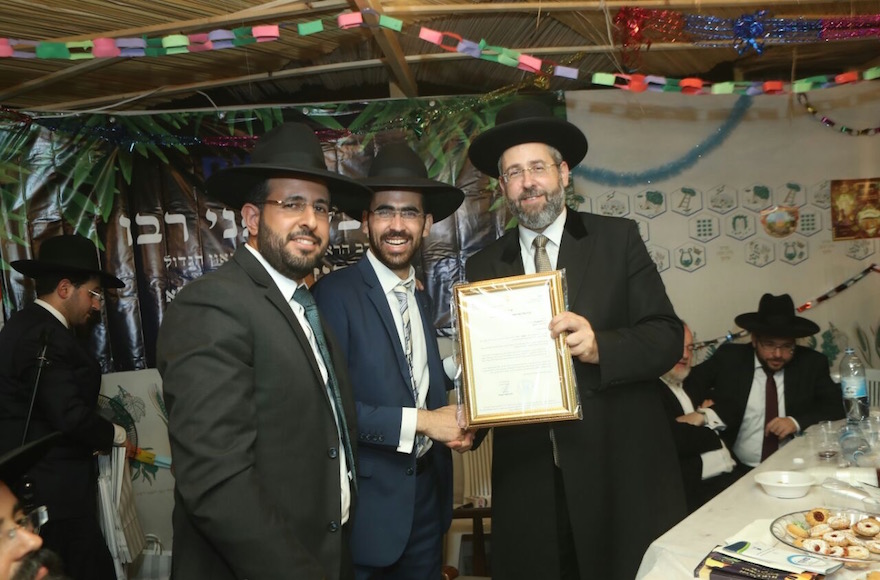 JERUSALEM (JTA) – Many Israelis feel alienated by the marriage process in their country, fed up with the bureaucracy and strict religious requirements.

Some seek to reform the haredi Orthodox-dominated Chief Rabbinate while creating alternatives to its monopoly on marriage and other personal status issues in Israel.

“People wonder why they have to deal with this procedure and why there is this monopoly over marriage,” Riani said. “They get very, very angry at the Chief Rabbinate. And that is exactly where we come in.”

The Chief Rabbinate and its allies in government have embraced B’Noam, which means “pleasantly” in Hebrew, since its establishment in 2015. By most accounts they view it as a haredi answer to Tzohar, a rabbinical group that offers marriage registration by the generally more lenient standards of religious Zionism.

A spokesman for Israel’s chief Ashkenazi rabbi, David Lau, said the Chief Rabbinate was “very, very pro-B’Noam,” which it sees as the only religious services group that recognizes its authority.

“If another group opens tomorrow, we will support them,” spokesman Pinkhas Tannenbaum said. “We support every organization that is helping people get married as long as they follow the Chief Rabbinate’s rules,” he added, implying Tzohar does not meet that standard.

Riani was among the handful of mostly young haredi community rabbis who started B’Noam. They were motivated, he said, by the growing public discontent with the Chief Rabbinate, which many see as religiously coercive and difficult to work with. Members of Israel’s secular majority must prove their Jewish bona fides to the haredi religious authorities — something that’s not always easy when one or both of their immigrant forebears weren’t Jewish or converted under non-Orthodox or obscure auspices.

According to last year’s annual survey by Hiddush, a group that promotes religious pluralism, 63 percent of Israelis support separating religion and state, which would mean abolishing the Chief Rabbinate in its current form. The number rose from 56 percent in 2012.

Uri Regev, the CEO of Hiddush, pointed to the obstacles to marriage for Jewish Israelis. Hundreds of thousands of Israelis are not able to marry in their own country, he noted, because while they are deemed Jewish enough to be citizens, they do not qualify religiously. This includes the families of many immigrants from the former Soviet Union who arrived under Israel’s Law of Return, which defines someone as Jewish in terms less strict than rabbinic law, or halachah.

Millions more would prefer not to have an Orthodox wedding but have no choice, Regev said. The recent Hiddush survey showed nearly half of Israelis wanted a non-Orthodox wedding.

By stepping in to offer friendly and helpful guidance, B’Noam aims to bolster the Chief Rabbinate’s reputation and authority.

“We fight for every Jew to get him the best services from the Chief Rabbinate, and yes, we believe that will strengthen the Rabbinate,” Riani said. “The chief rabbis know our project is very important and needed, and they recognize that our success will close the gap between the Chief Rabbinate and the Israeli public.”

B’Noam now claims some 1,000 members, about half the community rabbis in Israel, including some 300 religious Zionists, who tend to view Jewish law in a more accommodating way. Tzohar says it has more than 600 religious Zionist member rabbis.

B’Noam offers a range of religious services, from circumcision to burial, but its flagship program is marriage assistance. That program was launched in June and expanded last month with funding from Orthodox philanthropist Elio Moti Sonnenfeld, who renamed it B’Noam Danielle in honor of his daughter who died in a car accident.

About 60 rabbis work for B’Noam Danielle, according to Riani. They respond to calls to B’Noam’s hotline from morning to midnight during the week, and before and after Shabbat on the weekend. B’Noam also has a slick website and an office in Ramat Gan, a suburb of Tel Aviv. Riani said B’Noam Danielle gets about 20 calls a day and hopes to one day perform 5,000 marriages a year, or about 15 percent of the total, which happens to be the number claimed by Tzohar’s popular marriage program.

For many years, the Chief Rabbinate and haredi politicians have sought to crack down on Tzohar’s work, which includes private registry “customized for secular couples,” according to its website. Mainly they have tried to prevent its chairman, Rabbi David Stav, from registering people for marriage who do not live in Shoham, the Tel Aviv suburb where he is chief rabbi.

Haredi and some Orthodox religious Zionist politicians argued that only local rabbis have the knowledge necessary to check that couples qualify for Jewish marriage. But most observers interpreted the Chief Rabbinate’s opposition to Tzohar as an attempt to protect its monopoly over religious services.

By contrast, Israel’s religious establishment has gone out of its way to help B’Noam succeed. Haredi stars studded the group’s inaugural event in September 2015, including speeches by Lau and his Sephardi counterpart, Yitzhak Yosef, along with Interior Minister Aryeh Deri and Religious Affairs Minister David Azoulay.

Riani said he could call on those and other officials in a pinch to help him get Israelis the religious services they need, and said that access gives B’Noam an advantage over Tzohar.

Stav, who helped found Tzohar 1995, said such claims were “PR” and that navigating the Chief Rabbinate only required knowledge, not special connections. He also noted that Tzohar provides some services, like verifying a couple’s Jewishness, which the Rabbinate relies on.

More broadly, Stav predicted B’Noam would neither hurt his group nor help the Chief Rabbinate’s reputation.

“If there comes a time when there is no more need for Tzohar, we will say, ‘Wonderful. We have accomplished our mission,'” he said. “But we register more marriages than Jerusalem and Tel Aviv combined. People come to us because they want another option.”

Regev, of Hiddush, said more groups like B’Noam, or for that matter Tzohar, would not solve Israel’s marriage problem.

“These groups put a smiley face on the Rabbinate’s religious coercion,” he said. “But they don’t come any closer to bringing Israel out of the fold of the Rabbinate and into the fold of liberal democracy.”

Every year, thousands of Jews who cannot or do not wish to marry in Israel go abroad, mostly in Cyprus, for their nuptials, he noted. Meanwhile, a growing number are opting out of marriage.

Real change would only come, Regev said, when the public demanded it.