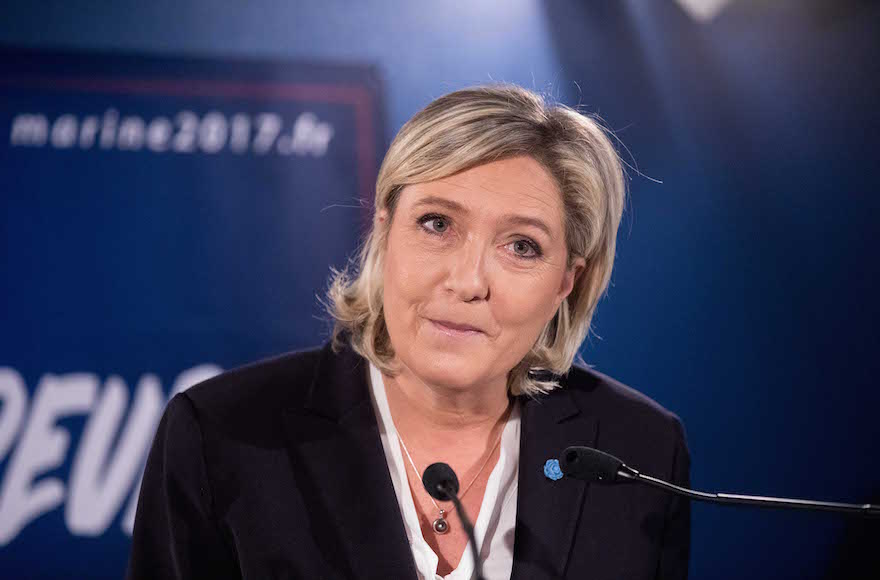 (JTA) — Far-right National Front Party leader Marine Le Pen is the leading candidate for president of France according to a major poll.

Le Pen is polling at between 25 and 26 percent in the first round of the presidential election, according to the poll conducted by Ipsos Sopra Steria for the French daily newspaper Le Monde, the newspaper reported Thursday.

According to Le Monde, Le Pen has not yet started her campaign in earnest. As late as last month, Fillon led Le Pen in opinion polls by about 3 percent. Incumbent president François Hollande of the Socialist Party was eligible to run for a second term, but last month announced that he would not seek reelection.

The National Front was founded by Le Pen’s father, Jean-Marie, who was convicted of genocide denial for saying the Holocaust was insignificant. Le Pen booted her father from the party in 2015 and has sought to gain mainstream acceptance for the National Front by distancing herself and her party from anti-Semitic rhetoric.

The first round of the French presidential elections will be held on April 23. If no candidate wins a majority, the two leading candidates face each other in a run-off vote on May 7.

Le Pen last week was spotted at Trump Tower, fueling rumors that she was meeting with President-elect Donald Trump. Trump transition officials told reporters that Le Pen did not meet with Trump or any member of his team.