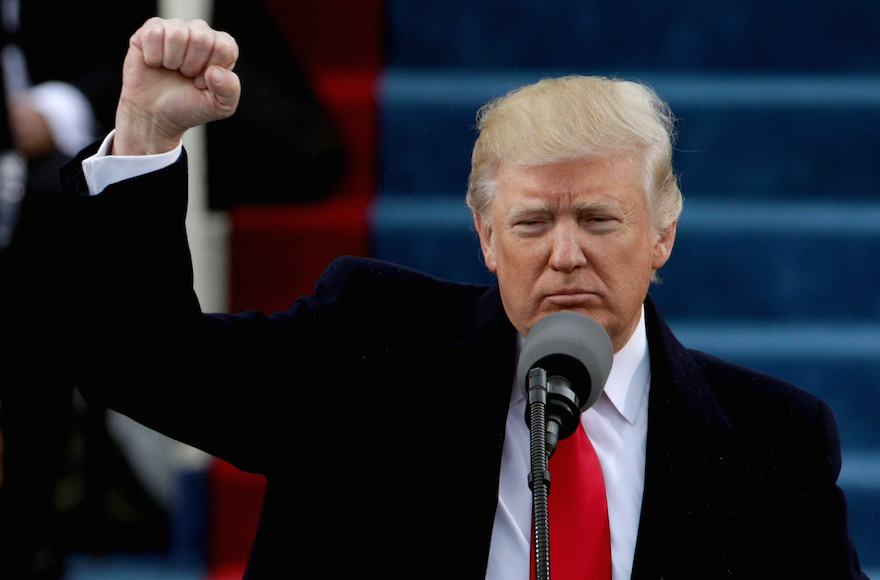 (JTA) — President Donald Trump promised to put “America first” in his inaugural address, pledging to prevent other countries from taking advantage of the United States and to return control of the country to its people.

Taking office at noon Friday following a tumultuous and divisive presidential campaign, Trump said his term would herald a return of power from the elite in Washington, D.C., to the American people.

Trump said the U.S. economy and military have suffered at the expense of other countries that benefit from American dollars, either in the form of military subsidies or factories built by American businesses. Israel, which just signed a $38 billion military aid agreement with the United States, is the biggest beneficiary of American foreign aid.

“For many decades, we’ve enriched foreign industry at the expense of American industry, subsidized the armies of other countries while allowing for the very sad depletion of our military,” he said. “We’ve made other countries rich while the wealth, strength and confidence of our country has disappeared over the horizon.”

Trump promised to prioritize “America first,” repeating the term. “America first” was the name of an isolationist and often anti-Semitic movement leading up to World War II. Trump has said previously that the slogan has no connection to the movement.

“From this moment on, it’s going to be America first. America first,” he said. “Every decision on trade, on taxes, on immigration, on foreign affairs, will be made to benefit American workers and American families.”

Trump also took a phrase from the Hebrew Bible in a brief allusion to unity, saying, “The Bible tells us how good and pleasant it is when God’s people live together in unity.” The verse he referred to is found in Psalm 133, which is also quoted in the popular Hebrew song “Hine mah tov umanayim.”

Following the inaugural address, Rabbi Marvin Hier, dean of the Simon Wiesenthal Center, delivered a benediction composed largely of quotes from the Bible. Hier has known the family of Trump’s Jewish son-in-law, Jared Kushner, for decades, and his center has received donations from them.

“Dispense justice for the needy and the orphan, for they have no one but their fellow citizens,” Hier said. “A nation’s wealth is measured by its values and not its vaults.”