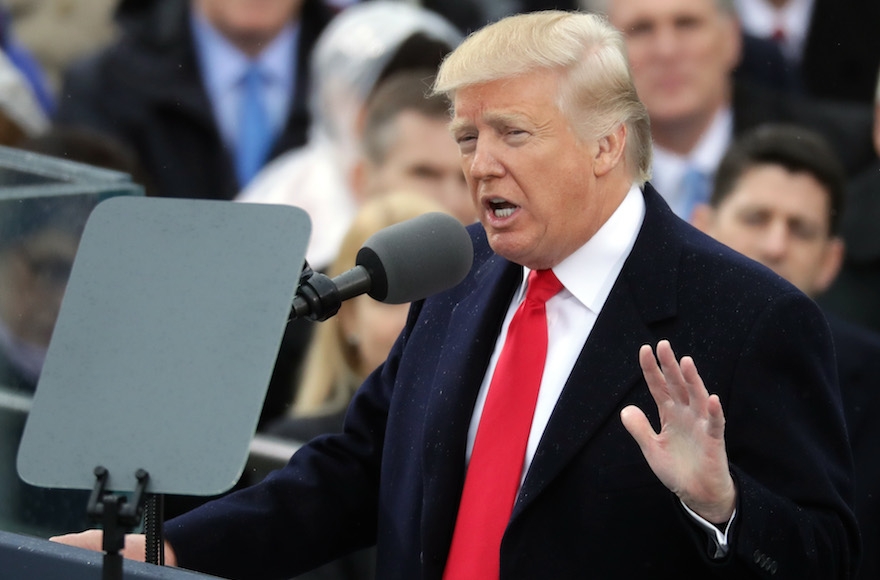 The Conference of Presidents of Major American Jewish Organizations praised the unifying portions of Trump’s speech and called on him to safeguard Israel’s security and other Jewish interests.

“We welcome President Trump’s acknowledgement of the need to heal the divisions in our country, to improve the lives of all Americans, to reinforce alliances and to strengthen our security,” the statement said. “We look forward to working with President Trump and his administration to deepen the historic special relationship between the U.S. and Israel, enhance the safety and security of the Jewish state and its people and on other issues of vital importance to the American Jewish community.”

While Trump promised to “reinforce old alliances and form new ones,” he also said the United States “subsidized the armies of other countries while allowing for the very sad depletion of our military.'”

“We’ve defended other nation’s borders while refusing to defend our own, and spent trillions of dollars overseas while America’s infrastructure has fallen into disrepair and decay,” the new U.S. leader said.

The Zionist Organization of America, a right-wing group whose leaders have praised Trump, congratulated him on “initiating a great new era of the United States of America.” ZOA also praised Trump for using a verse quoted often by Jews from the Bible. In his speech, Trump said, “The Bible tells us how good and pleasant it is when God’s people live together in unity.”

“We appreciate our new President’s determination to eliminate the scourge of radical Islam, and his quote of one of our favorite lines from Psalm 133, often sung by the Jewish people, about dwelling together in unity,” the statement from ZOA President Morton Klein and Chairman Michael Goldblatt said.

The Anne Frank Center for Mutual Respect, which opposes bigotry and promotes Holocaust remembrance, castigated Trump’s speech for failing to reassure the minorities the president’s statements targeted during his campaign. The statement also linked the president to the “alt-right,” a loose movement that traffics in white nationalism.

“He gave the most hateful speech based on alt-right nationalism we could have feared,” the center’s executive director, Steven Goldstein, said in a statement. “Mr. President, you cannot make America great again if you make it exclusionary again. You did nothing to heal the wounds you inflicted upon women, people of color, LGBT people, immigrants, refugees and the differently abled.”