When Jewish immigrants were detained, and Jews took to the streets 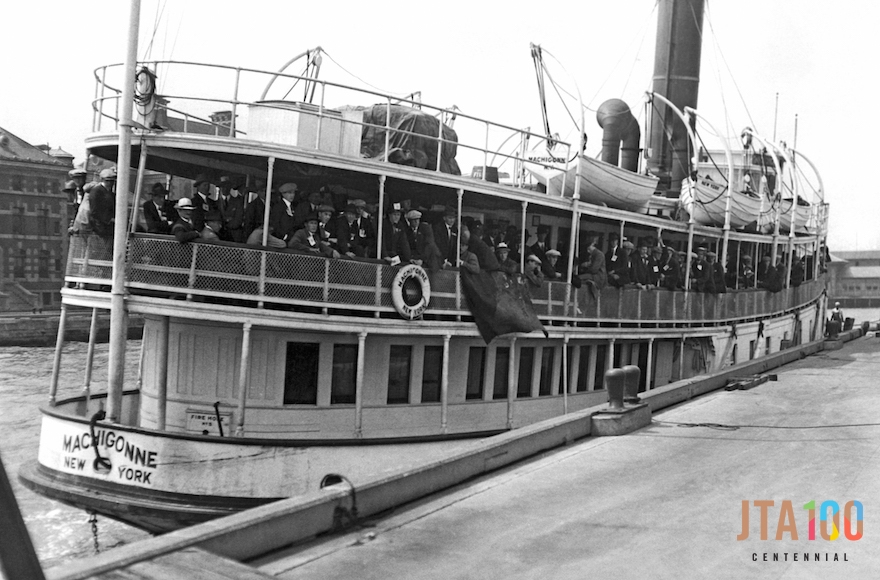 (JTA) — When Jews joined the protests around the country this weekend against President Trump’s executive order on immigration, they were largely doing so on behalf of Muslim refugees and migrants who found themselves in a legal limbo and barred from entering the United States.

But nearly 100 years ago Jewish protesters gathered to demand the release of fellow Jews, who were caught up in a legal drama eerily similar to the one that has played out in airports and courts since Friday.

On Nov. 15, 1923, 2,000 Jews rallied at the Lower Manhattan headquarters of the Hebrew Immigrant Aid Society to protest the detention of 3,000 of their relatives at Ellis Island.

They appealed directly to President Calvin Coolidge, a Republican, presumably asking him to ease the strict moratorium on immigration that had been put in place in 1921 under the “Emergency Quota Act” and re-upped the following year. Anti-immigrant groups had long argued that immigrants from poorer and “backward” regions of southern and eastern Europe were a drain on American resources and brought with them radical ideas like anarchism, communism and socialism. Some labor unions, too, joined the anti-immigrant spirit, arguing that cheap labor would depress wages.

Like Muslim travelers detained at U.S. airports this week or left in limbo in transit countries as a result of Trump’s executive order, Jewish and other immigrants often set sail unaware of changes in the immigration law, or aboard ships whose unscrupulous operators didn’t inform them that there were strict quotas already in place.

According to the JTA story on the 1923 protest — which appeared the next day — leaders of the demonstration “urged that a large delegation be sent to Washington to request that the detained immigrants be admitted. They are planning a protest mass meeting if the Government deports their relatives.”

JTA also printed an appeal that was to be sent to Coolidge, urging the release of the immigrants:

On behalf of the immigrants, blood relatives of citizens and declarants, facing deportation because of the exhaustion of quotas, I appeal to your well-known exemplification of American sense of justice to admit them to this country.

These unfortunates who have given up their all to be reborn to the ideals of liberty and freedom are the innocent victims of circumstances over which they had no control. Humanitarianism prompts the plea for their admission.

On Dec. 3, JTA reported that Secretary of Labor James J. Davis approved the deportation of hundreds of the detained immigrants to Canada. Others were sent to Cherbourg, France, “whence they are returnable to the countries from where they embarked for the United States.” By 1924, with the passage of the fiercely nativist Johnson-Reed Immigration Act, immigration from outside of Western Europe slowed to a trickle.

A month after the protest outside HIAS headquarters, Rabbi Nathan Krass of New York’s Temple Emanu-El gave a fiery sermon, quoted in JTA, railing against the anti-immigrant fervor of the day.

“Imagine what would have happened if a committee of Indian immigration officers had stood on Plymouth Rock, and, after admitting ten Pilgrim Fathers, had said, ‘Your quota is full. The rest of you go back to England,’” said Krass. “Yet we are all immigrants or descendants of immigrants. An American means any one who is born in America, or who, hailing from other lands, takes out citizenship papers and swears allegiance to the Constitution. This recent attempt to delimit Americans on the basis of religion or race is an outrageous insult to the intelligence of people of this land and treachery to the ideals of the founders of this Republic.”

HIAS, meanwhile, continues to assist immigrants, processing more than 4,000 refugee asylum applications annually – most of them for non-Jews, and many of them impacted by last week’s executive order. As HIAS President and CEO Mark Hetfield told MSNBC on Sunday, “what I’ve seen over this weekend has been one of the best things I’ve ever seen… Americans in the streets, chanting ‘no hate, no fear, refugees are welcome here’ made me proud to be an American.”