Jared Kushner’s grandmother on being a refugee: ‘The doors of the world were closed to us’ 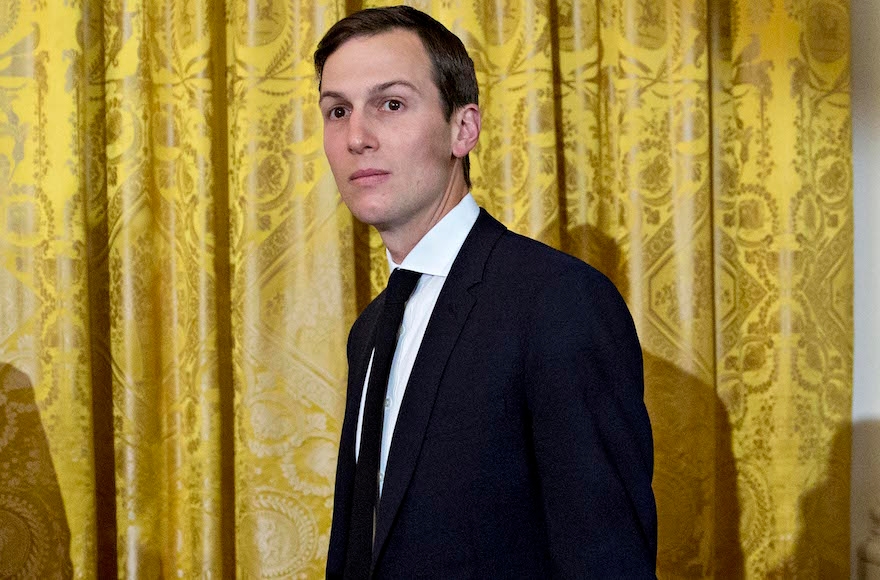 Jared Kushner arriving to a swearing in ceremony of White House senior staff in the East Room of the White House in Washington, D.C., Jan. 22, 2017. (Andrew Harrer-Pool/Getty Images)
Advertisement

(JTA) — Jared Kushner, President Donald Trump’s Jewish son-in-law and senior adviser, stayed silent as protests broke out across the country against Trump’s controversial refugee ban — which prohibits for 120 days all refugees and for 90 days citizens of seven Muslim-majority countries from entering the country.

But Kushner’s family history was thrust into the spotlight as The Nation reported on testimony of his late grandmother, Rae Kushner, in which she spoke of her struggles as a Nazi-era refugee with nowhere to go.

Rae Kushner was born in 1923 in Novogrudok, a city in Poland occupied by the Soviet Union and then Nazi Germany, to a middle-class Jewish family of six. Only three family members survived the war: Rae Kushner, her father and one of her sisters. And though her father had eight siblings and her mother had three, Rae Kushner was left with only two cousins. During the war, the Nazis turned Novogrudok into a ghetto. Conditions were bad and Nazis would come in at will and kill people.

Rae Kushner escaped the ghetto through an escape tunnel dug by Jews and lived in the woods for nine months with her sister and father. They later smuggled themselves into several countries — the former Czechoslovakia, Austria, Hungary — ending up in a displaced persons camp in Italy.

Unable to find a country to take them in, Rae Kushner and her husband, Joseph, whom she met as a member of the famed Bielski partisans and married in Hungary, stayed in Italy for 3 1/2 years until relatives in the United States helped them get visas.

In the United States, she and her husband had four children, including Charles Kushner, Jared’s father. Rae Kushner passed away in 2004.

Below are some of the most powerful parts of her testimony, which come from a 1982 interview by the Kean College of New Jersey Holocaust Resource Center and published by the U.S. Holocaust Memorial Museum in Washington, D.C.:

On life in Poland before the war:

A few Jews, friends of my father’s who had stores, left everything and went to Palestine. They said to my father and mother, “Sell everything and run.” But we had a problem. We didn’t know where to run. There was no Israel like there is today. There was no place that you could legally go to. It was very hard to get a visa to the United States; it would take years and years. … We felt something was coming, but we couldn’t help ourselves. The doors of the world were closed to us.

On life in the Jewish ghetto of Novogrudok:

You could not hide. The Germans would kill all of the Jews. It was risky. If you did not give the Germans what they wanted, they would kill everyone with machine guns.

On illegally crossing the border from Hungary, where she had married her husband, to Italy after the war:

The day after [we] got married, we smuggled ourselves over the border into Italy. This was our honeymoon. In Italy we sat in a displaced persons camp. It was like being in the ghetto again. My oldest daughter, Linda, was born there.

On trying to find a place to resettle:

We wanted to go to to Africa, to Australia, to Israel. We would go anywhere we could live in freedom but nobody wanted us. Nobody opened their doors to us. Nobody wanted to take us in. So for 3 1/2 years we waited until we finally got a visa to come to the United States. … For the Jews, the doors were closed. We never understood that. Even President Roosevelt kept the doors closed. Why? The boat, St. Louis, was turned back. What was the world afraid of? I don’t understand. Thank God, now we live normal lives with our family and friends. But this question always stays on my mind.

On whether the American Jewish community did enough to help European Jews during the war:

We felt that they did not do enough. Maybe they couldn’t do more. I know there were delegations to the president. If Americans had bombed the gas chambers, it could have been better. That way even [if] some Jews were killed, maybe others would have been saved.

On life in the United States:

Our life is a miracle. We survived the camps, the ghettos and the woods. It is a miracle that we lived to became (sic) normal people. Our lives are miracles, our children and grandchildren are miracles. We never dreamed that out of the ashes and rubble, we would survive to lead normal lives and see and build the next generation.