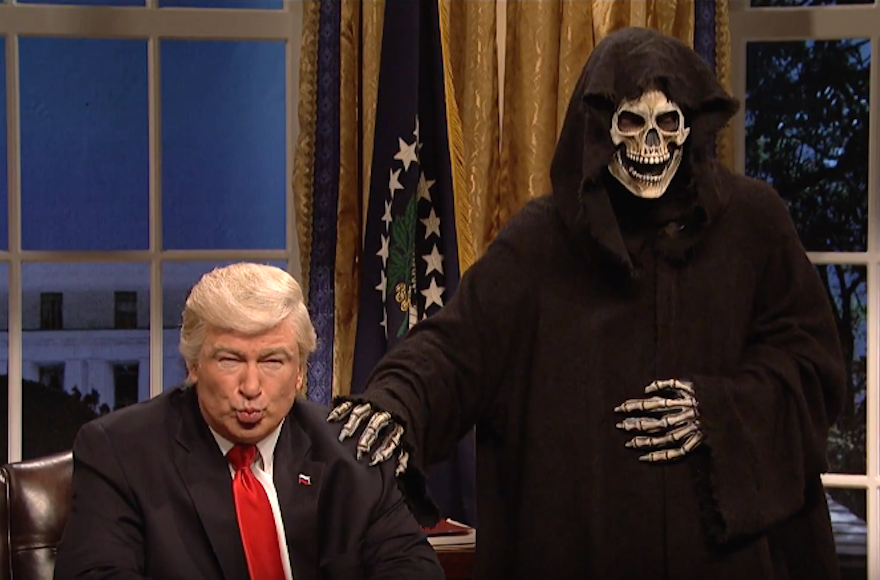 (JTA) — From a mention of Ivanka and Jared’s Shabbat observance to poking fun of Sean Spicer’s defense of a Holocaust statement that did not mention Jews, this weekend’s “Saturday Night Live” had no shortage of Jewish content. Here’s the low-down on the sketches you may have missed.

The sketch-comedy show opened with President Donald Trump (played by Alec Baldwin) sitting at his desk in the Oval Office. Trump asks an aide whether Ivanka Trump and Jared Kushner, his Orthodox Jewish daughter and son-in-law are there, saying they “always keep me so calm and make sure I don’t do anything too crazy.” When the aide says the couple are off observing Shabbat, Trump says: “Perfect, when the Jews are away the goys will play.”

The reference to Ivanka and Jared’s Shabbat observance didn’t come out of nowhere. A Vanity Fair article suggested that the couple may have been unaware of protests against Trump’s controversial refugee ban since the fallout began over Shabbat.

After Trump tells both the Australian prime minister and Mexican president to “prepare to go to war,” Bannon-cum-Grim Reaper suggests Trump call Germany. German Chancellor Angela Merkel (played by Kate McKinnon) picks up, not doing much to hide her disappointment that former president Barack Obama isn’t the one calling.

Trump starts talking about Holocaust Remembrance Day, but quickly makes it about himself.

“I want to be serious for just a moment, last week it was Holocaust Remembrance Day and as you know 6 million people,” he says, pausing, “were at my inauguration.” He then tells a speechless Merkel that he will write a memoir about unfair media coverage of his inauguration, titled “My Struggle” and asks her how to say the title in German.

“This is soapy water, and I’m washing that filthy lying mouth,” Spicer says when the reporter reacts with shock.

“First of all, how could the statement be anti-Semitic? The guy who wrote it was super Jewy, okay?” asks McCarthy’s Spicer. (The real-life Spicer, in defending the statement, said it had been written “with the help of an individual who is both Jewish and the descendants of Holocaust survivors,” later reported to be White House staffer Boris Epshteyn.)