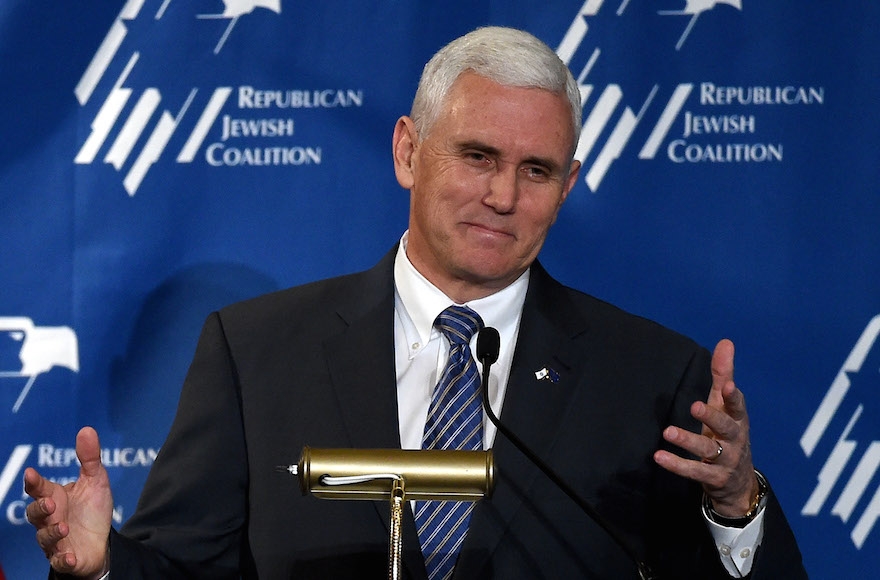 WASHINGTON (JTA) — Vice President Mike Pence will speak at a Republican Jewish Coalition confab, a signal of warming relations between the group and the Trump administration.

Pence will speak Feb. 24 at its annual leadership meeting, the RJC said Wednesday.

The RJC has enjoyed a close relationship with Pence, a pro-Israel leader during his years in Congress and then as Indiana governor.

Still, the presence of such a senior administration figure at the event suggests that tensions between some of the group’s top donors and Donald Trump during the campaign have dissipated.

Trump, appearing at the RJC’s candidates forum in December 2015, said he would prefer neutrality on Israeli-Palestinian peace and would not commit to moving the U.S. Embassy to Jerusalem. He eventually reversed himself on both positions. Last week, his White House issued a statement reversing decades of U.S. policy by declaring that settlements, while they “may not help” bring about peace, are not an impediment to it.

Additionally, Trump earned the backing of casino magnate Sheldon Adelson, a major backer of Republicans and pro-Israel groups, the RJC in particular.

Most RJC donors supported more establishment figures during the campaign. Some came around only after Trump had secured the nomination, while others never came around at all.