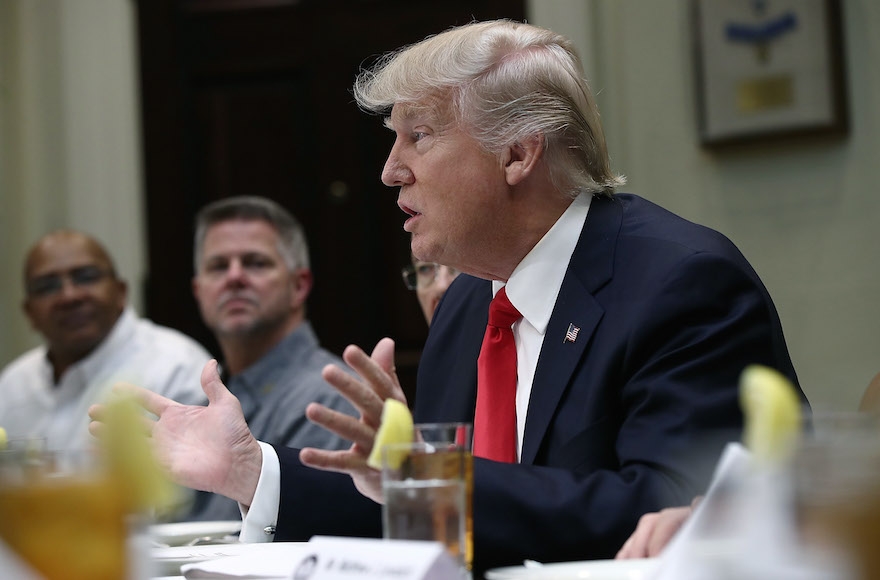 WASHINGTON (JTA) — On the eve of a summit between President Donald Trump and Israeli Prime Minister Benjamin Netanyahu, a senior White House official said a two-state solution was not a necessary outcome of peace talks between Israelis and Palestinians.

“A two-state solution that doesn’t bring peace is not a goal that anybody wants to achieve,” the official said Tuesday evening, according to a pool report for reporters filed from the White House. The official was not named.

If Trump makes similar remarks in his joint news conference Wednesday with Netanyahu, it would represent a formal retreat from U.S. policy since 2002, when President George W. Bush said Palestinian statehood was a goal of peace talks. A two-state outcome was also the implied policy of Bush’s predecessor, President Bill Clinton.

Notably, earlier Tuesday, when White House spokesman Sean Spicer was outlining the visit for reporters, he avoided mention of a two-state solution, which has been boilerplate for years.

Spicer said Trump would seek “a comprehensive agreement to end the Israeli-Palestinian conflict so that Israelis and Palestinians can live together in peace and security.”

Netanyahu still favors a two-state outcome, although much of his Cabinet has said it should be abandoned for now, and some Cabinet ministers have proposed annexing parts of the West Bank.

The official said that Trump, as he said during the campaign, would “very much” like to achieve a peace deal.

The official also said that Iran would be on the agenda. Netanyahu and Trump both do not like the deal reached in 2015 that trades sanctions relief for a nuclear rollback. Netanyahu had spoken for a time of possibly killing the deal, but Trump’s aides have said they favor stricter enforcement.

Like Trump and other administration officials, the official emphasized what they believe will be closer relations with Israel after eight years of tension between Netanyahu and former President Barack Obama.

The summit, the official said, would “usher in a new relationship between Israel and the United States — something that Israel has not seen in well over eight years, a relationship that will show there is no daylight, that we are fully cognizant of the situation that Israel finds itself in.”