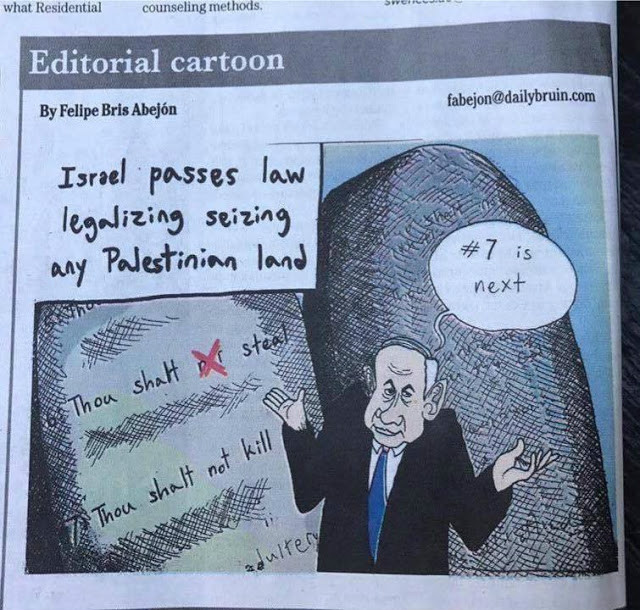 LOS ANGELES (JTA) — A cartoon seen as anti-Semitic that was published in the UCLA student newspaper has been strongly condemned by civic and campus organizations, among them a pro-Palestinian student group.

The cartoon published Monday in the Daily Bruin shows Israeli Prime Minister Benjamin Netanyahu standing in front of two stone tablets inscribed with the Ten Commandments. In the commandment “Thou Shalt Not Steal,” the word “not” has been crossed out in red.

Pointing to another commandment “Thou Shalt Not Kill,” labeled as the seventh by the cartoonist, Netanyahu shrugs his shoulders and says, “#7 is next.”

In the upper left corner of the cartoon, the legend reads: “Israel passes law legalizing seizing any Palestinian land.”

It refers to a law passed last week by the Israeli Knesset that allows the state to seize private Palestinian land on which settlements or outposts were built, as long as the settlers were not aware of the status of the land. In cases where the landowners are known, they are entitled to compensation.

The cartoonist, Felipe Bris Abejon, is an undergraduate student in political science who last year served as education and resources director of the UCLA chapter of Students for Justice in Palestine, or SJP, a strongly anti-Zionist and pro-Palestinian national student group.

In a letter to the Daily Bruin, the SJP board at the University of California, Los Angeles condemned the cartoon and said that Abejon is currently not an SPJ member.

On Facebook and in letters to the editor, most critics of the cartoon argued that by involving the sacred Tablets of the Law, the cartoonist had crossed the line from anti-Zionism to anti-Semitism.

Danny Siegel, president of UCLA’s Undergraduate Student Association Council, declared in a statement: “As a Jewish student at UCLA, I am disgusted by the anti-Semitic claim in my school newspaper that the Israeli government is purposefully using my Jewish faith to justify policy matter.”

A statement by the Anti-Defamation League denounced the cartoon as “deeply offensive … and impugning core Jewish beliefs.”

Other critical statements were released by the campus Hillel chapter, members of the California Legislature, and Ha’am, the campus Jewish newspaper, which reported extensively on the controversy.

Tanner Walters, editor-in-chief of the Daily Bruin, pointed to an editorial lapse of judgment.

“This was a mistake that should have been caught at any point in the process, and it didn’t get caught,” Walters said.

He added that his paper has no formal process for religious, cultural and ethnic sensitivity training and that editing teams rely on common sense to avoid such mistakes.

In a subsequent letter of apology, the Daily Bruin promised to reach out to local religious leaders “to help our staff understand the historical context behind these kinds of hurtful images.”

In his own defense, Abejon said, “I stand by what the cartoon represents. I also stand against anti-Semitism and intolerance against the Jewish people. I apologize to anyone who has been offended, but I still stand behind what this cartoon says politically.”

Other protests of the cartoon were issued by Rabbi Aaron Lerner, UCLA’s Hillel director, and California state legislator Richard Bloom, who called for action by the UCLA administration.