Trump, the Jews and the political weaponization of anti-Semitism 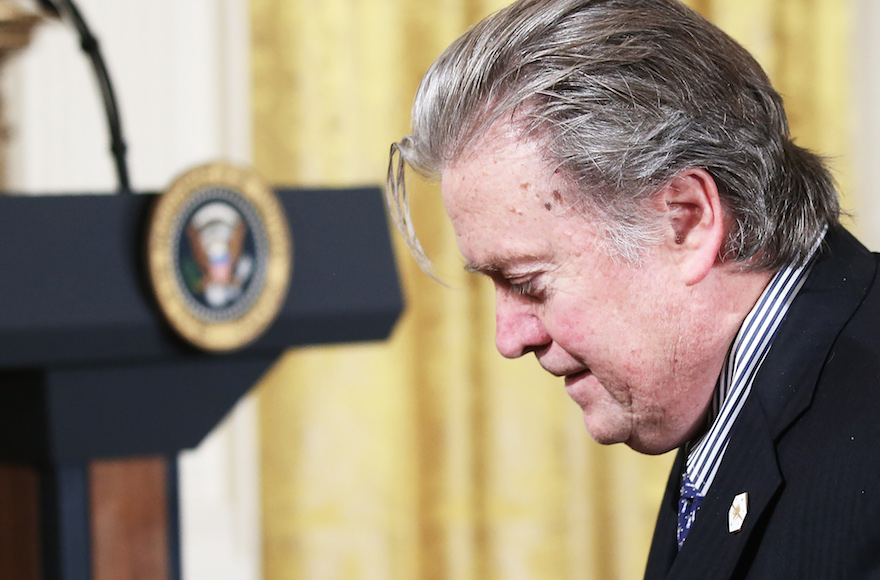 Steve Bannon at a news conference in the East Room at the White House, Feb. 16, 2017. (Mario Tama/Getty Images)
Advertisement

At some point in the past week, it looked like President Donald Trump was never going to use “anti-Semitism” in a sentence. It took a fourth series of hoax bomb threats at JCCs around the country and imprecations from Jewish groups across the ideological spectrum for the president to at last use the “A” word.

“Anti-Semitism is horrible and it’s going to stop, and it has to stop,” Trump said Tuesday morning. “The anti-Semitic threats targeting our Jewish community and our Jewish community centers are horrible, are painful and they are a reminder of the work that still must be done to root out hate and prejudice and evil.”

That it took so long for Trump to condemn anti-Semitism after twice being asked about it last week, and coming on the heels of a White House International Holocaust Remembrance Day statement that somehow omitted any mention of the Jews, was “mind-boggling” to many groups, including the Anti-Defamation League, which said so in a tweet.

It had reached a point that I already started imagining a White House Passover greeting that didn’t mention the Jews.

“Starting at sundown, the world will come together to remember certain events in Egypt,” it would begin, and end with, “I’ve made it clear that all plagues are horrible.”

What made Trump’s demurrals stranger is that denunciations of anti-Semitism are to presidential declarations what kosher symbols are to supermarket goods: It doesn’t hurt to have one, and only Jews usually notice.

So why did it take the administration five tries to get it right? I am counting the two news conferences, in which Trump basically punted on the question from two Jewish reporters; a statement from the White House on Monday that denounced “hatred and hate-motivated violence of any kind” without mentioning Jews or anti-Semitism, and daughter Ivanka’s tweet saying “We must protect our houses of worship & religious centers. #JCC.” The JCC hashtag was a nice touch, but not exactly a Queen Esther-style declaration of co-religious solidarity.

Pundits spent the past week trying to explain Trump’s hesitation. Peter Beinart blamed narcissism, using the theory that when Trump hears “anti-Semitism,” he can’t help but take it as a personal attack that he must fend off. I wondered if it was simple belligerence — that the more you ask this president for something, the more he is likely to say “you can’t make me.”

Or maybe he was just annoyed at the ADL, the group most identified with combating anti-Semitism, for repeatedly calling him and his campaign out for either ignoring or encouraging intolerance. Maybe Trump saw CEO Jonathan Greenblatt’s Feb. 17 column in The Washington Post recalling how “the Trump campaign repeatedly tweeted and shared anti-Semitic imagery and language,” thus “allowing this poison to move from the margins into the mainstream of the public conversation.”

The most ominous explanation was that Trump was throwing a bone to — or at least trying not to alienate — the anti-Semites among “alt-right” trolls who formed a small but vocal part of his winning coalition. That was the theory offered by Bradley Burston from the left-wing Haaretz newspaper and a surprisingly outspoken Chuck Todd of NBC News.

“Mr. President, we believe you and many other Jews believe you, so please make it clear that not only are you not an anti-Semite but that you reject people who are even if they did vote for you,” Todd said last week.

If Trump had been struggling with a political calculation, it was reminiscent of one that played out in the 2008 campaign, when then-candidate Barack Obama was being pressed to disavow an endorsement from Nation of Islam leader Louis Farrakhan. When he was asked about Farrakhan during a debate with fellow Democratic contender Hillary Clinton, you could almost see the thought bubble over Obama’s head as he weighed how to reject Farrakhan without alienating supporters who considered him a hero.

Obama answered by reiterating his “denunciation” of Farrakhan’s anti-Semitism, leading to a semantic debate with Clinton over the distinction between “denouncing and rejecting.” Eventually the ADL’s then national director, Abe Foxman, declared that Obama had cleared the Farrakhan hurdle.

If Trump’s allergy to the “A” word is a political calculation, what would it be? He knows that three out of every four Jews didn’t vote for him, and perhaps someone is whispering to him, a la James Baker, that he gains no advantage by caving to a special interest as liberal as the Jews.

Trump’s critics pin the issue on his chief strategist, Stephen Bannon, who came to the Trump campaign after steering Breitbart News, which he himself called a “platform” for the alt-right, among other right-wing movements. In turn, Bannon’s defenders note that Breitbart is enthusiastically pro-Israel and often keeps tabs on anti-Semitism.

But search “anti-Semitism” at Breitbart and a pattern emerges — one that could explain the week that was. The site seems most exercised about Jew hatred when it is committed by Muslims, members of the left wing in Europe, and far left and anti-Israel activists on American college campuses. When it does report on hate crimes in the United States, its coverage is almost always skeptical, highlighting hate-crime “hoaxes” or quoting those who deny that there has been a surge in hate crimes here since the U.S. elections or in Britain since Brexit.

This week, when much of the press corps was focusing on how and whether Trump would denounce anti-Semitism, Joel Pollak, a senior editor-at-large at Breitbart, was accusing the media of hyping fears of anti-Semitism. Pollak blames an “ongoing pattern of false ‘hate crimes’” and the media’s reluctance to report on left-wing anti-Semitism. But mostly he blames general “anti-Trump hysteria.”

“Trump’s critics seem to want to believe false accusations of antisemitism, which justify their hatred of him and maintain a sense of outrage and unity among activists,” writes Pollak.

For Pollak and other Breitbart contributors, the reporting and denunciation of anti-Semitism is a partisan weapon wielded by the left to discredit the right. (Just as Trump asserted that it’s a charge wielded by a dishonest media to discredit him.) Of course, Breitbart also politicizes anti-Semitism, using it as a scarlet “A” to be worn, almost exclusively, by Muslims, campus radicals, self-hating Jews and European leftists. That’s of a piece with reports that the administration plans to change a government program for countering violent extremism to focus only Islamism, removing the scrutiny of white supremacist groups.

In fact, it has become an increasingly familiar trope both on the left and the right to accuse the other of being more anti-Semitic.

At least both sides agree that anti-Semitism is bad, even if they hesitate to take responsibility for the version that metastasizes among their ideological allies. They want to target the Jew haters but are wary about friendly fire.

Maybe the mistake of Jewish groups in seeking a strong response from Trump is that they are living in a simpler past, when both sides could agree that anti-Semitism was an evil, no matter the perpetrators or their politics.