Bernie Sanders at J Street: One can be pro-Israel and rap its government 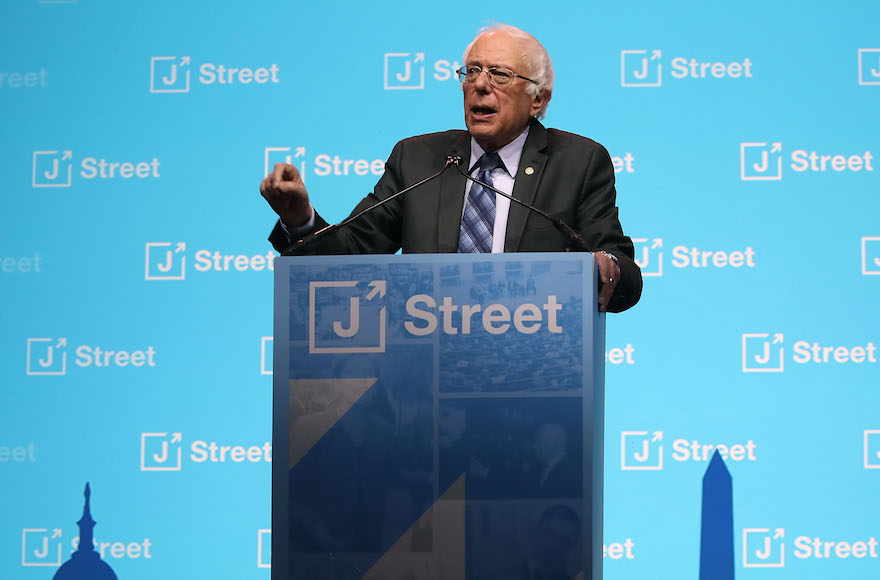 WASHINGTON (JTA) — U.S. Sen. Bernie Sanders, speaking with affection of his life in Israel decades ago, told a rapturous J Street conference that one could sharply criticize the Israeli government’s policies and be pro-Israel.

Sanders, I-Vt., speaking Monday in his first Middle East policy speech since ending his bid last June for the Democratic presidential nomination, also blasted President Donald Trump for retreating from a commitment to a two-state solution and not speaking out forcefully against anti-Semitism and bigotry.

Sanders’ recollection of his time in Israel was rare – he barely addressed it during his presidential run, and indeed has not been as expansive about his life on kibbutz since he first ran for Congress in 1990.

He laced his call to urge Israel to adopt more progressive policies with appeals to progressives to embrace Israel as a Jewish homeland.

“Now, as many of you know, I have a connection to the State of Israel going back many years,” Sanders said, addressing the liberal Jewish Middle East policy group’s annual conference.

“In 1963, I lived on a kibbutz near Haifa,” he said. “It was there that I saw and experienced for myself many of the progressive values upon which the State of Israel was founded. I think it is very important for everyone, but particularly for progressives, to acknowledge the enormous achievement of establishing a democratic homeland for the Jewish people after centuries of displacement and persecution, and particularly after the horror of the Holocaust.”

Sanders said that recognizing the ensuing Palestinian suffering should not diminish support for Israel.

“But as you all know, there was another side to the story of Israel’s creation, a more painful side,” he said. “Like our own country, the founding of Israel involved the displacement of hundreds of thousands of people already living there, the Palestinian people. Over 700,000 people were made refugees. To acknowledge this painful historical fact does not ‘delegitimize’ Israel, any more than acknowledging the Trail of Tears delegitimizes the United States of America.”

Israeli Prime Minister Benjamin Netanyahu has made combating “delegitimization” of Israel a central plank of Israeli diplomacy, and Sanders said opposing Netanyahu did not amount to being anti-Israel.

Sanders began his speech by slamming Trump for what he said was his failure to address the spike in anti-Semitic and other bias incidents since his election.

“When we see violent and verbal racist attacks against minorities – whether they are African-Americans, Jews, Muslims in this country, immigrants in this country, or the LGBT community, these attacks must be condemned at the highest levels of our government,” he said.

“It was rather extraordinary that in the White House’s Holocaust Remembrance Day statement, the murder of 6 million Jews was not mentioned by the Trump administration,” Sanders said, referring to a controversy still brewing. “I hope very much that President Trump and his political adviser Mr. [Stephen] Bannon understand that the world is watching. It is imperative that their voices be loud and clear in condemning anti-Semitism, violent attacks against immigrants in this country, including the murder of two young men from India, and all forms of bigotry here and around the world.”

He also faulted Trump for retreating earlier this month in a meeting with Netanyahu from the U.S. commitment since 2002 to a two-state solution.