In this family, all four siblings found spouses at the same summer camp 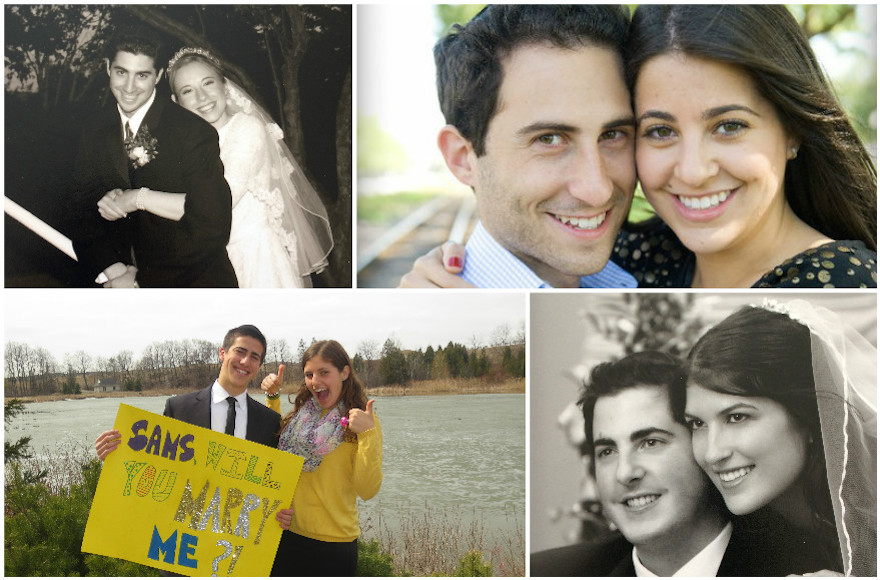 (JTA) — Ami Yunger is used to people sounding surprised when they hear that he and his three siblings all met their spouses at the same summer camp. But he doesn’t think it’s that weird.

“Funny enough, I am so used to it that sometimes I think that it is strange when I hear about couples who did not meet their spouse at camp,” Yunger said.

The 24-year-old now studies economics at Bar-Ilan University in Israel, but he grew up in Montreal. He followed the path of his modern Orthodox siblings at age 10 when he began spending summers at Camp Moshava in Ennismore, Ontario — a small outpost of the Bnei Akiva religious Zionist youth movement. There he met a girl named Samara when he was 14 and she was 13. They didn’t start dating until moving to Israel after high school, just before Ami served in the Israeli army, and they married five years ago.

In doing so, Ami became the last of the four Yunger siblings to marry someone they met at Moshava.

No surprise, then, that he invited dozens of Moshava campers to his wedding, and not just those with whom he went to camp.

“Half the camp disappeared and they all went to my kid’s wedding,” said Joy Yunger, Ami’s mother. “It was like being at camp — the kids came and it was such a camp atmosphere, they sat around in a circle.” 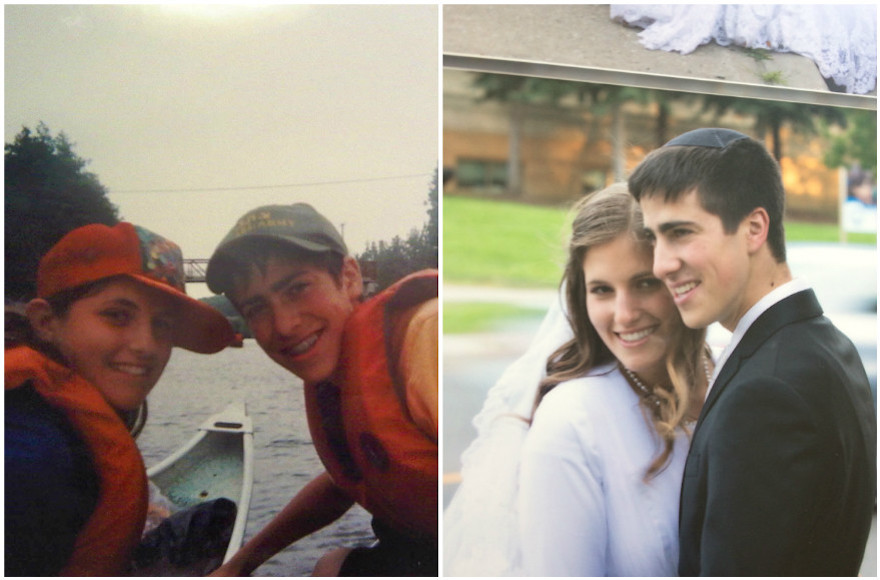 Ami and Samara at Camp Moshava and at their wedding. (Courtesy of Ami Yunger)

Finding love at Jewish camp is not exactly a new or rare phenomenon. Many Jewish camps, especially those that fall under a specific denomination’s umbrella, host campers with similar religious and socioeconomic backgrounds. The Conservative movement’s Ramah camp network has its own dating app for alumni.

But a group of four siblings meeting their spouses at the same camp? Yunger’s brother Gadi, 33, and sister Naomi, 30, even married siblings from the same Toronto family.

All of the Yunger siblings started officially dating their basherts after their time in camp — although some were not too adept at hiding their developing feelings before then. Shlomie, 35, and his wife Dalia, 36, were “only friends” and fellow camp employees throughout their camp days (Shlomie as a counselor and Dalia on sports staff), but most of the camp sniffed out their budding romance.

One time, when Dalia was assigned to the rock climbing wall, Shlomie offered to climb as an example to a group of young campers. As Dalia helped belay him down, some of the boys entangled their ropes — so when Shlomie made it down he was tied up next to Dalia. 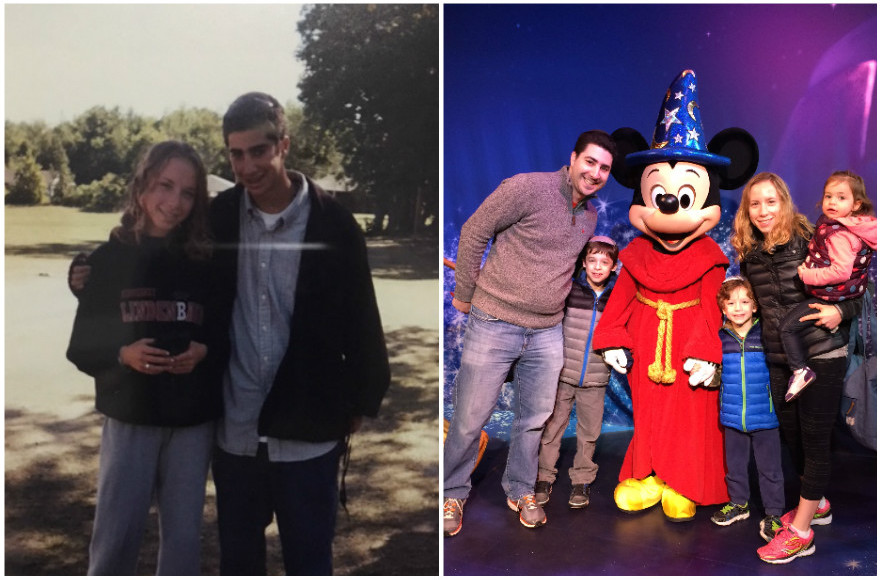 For one summer, Naomi slept in a bunk that her future sister-in-law Dalia helped oversee. It was during that time that Joy Yunger first became acquainted with Dalia — through a letter Naomi wrote home calling her an amazing counselor. Naomi’s only complaint was that Dalia made her and her fellow bunkmates do push-ups if they misbehaved. 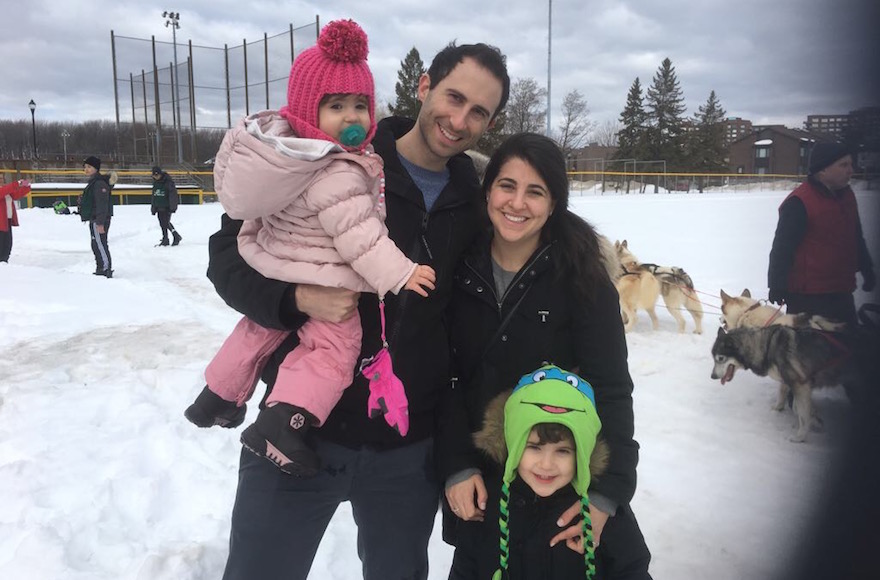 “Since then, my daughter-in-law has run the New York Marathon four times,” Joy said.

Today, Shlomie and Dalia Yunger live in Toronto, where he is an accountant and she works in regulatory finance. Gadi and Atara live in Modiin, Israel, from where he runs a clothing company based in Toronto (he makes frequent business trips) and she works as a graphic designer at a company in Tel Aviv.

Naomi and Zvi also live in Toronto, where she is a kindergarten teacher and Zvi works in finance. While Ami goes to school in Ramat Gan, Israel, Samara works as a special education teacher in Beit Shemesh.

They all know of other couples who met at their camp, and they say it was easy to find love at Camp Moshava because most, if not all, of the campers developed a deep bond to Israel. Gadi said at times he felt like he was on a kibbutz because of the communal themes, how much campers learned about Israel over the summers and the number of Israeli workers on campus. 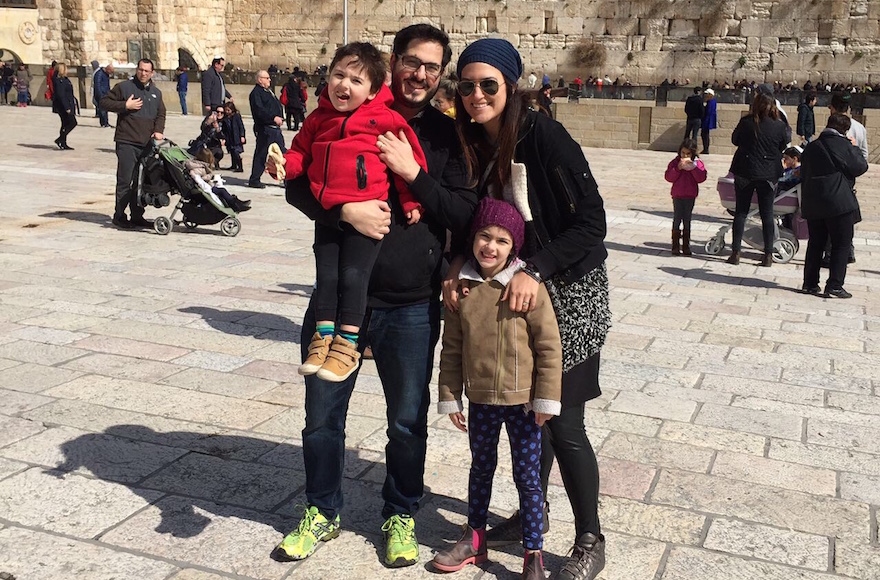 Gadi and Atara Yunger with their son Itai, 3, and daughter Neriyah, 6, at the Western Wall in Jerusalem. (Courtesy of Gadi Yunger)

“For Atara and I, one of our prerequisites was that the other would want to live in Israel one day,” Gadi said. “When you have like-minded people [at camp] that believe in something like Israel, I think it just works.”

Dalia added that the camp’s retro aesthetic and feel — embodied in things such as rustic bunks and the old, decaying couches in the small room where counselors hang out — brought the camp staff closer. Camp administrators even paired up counselors who they thought might have crushes on each other to do nightly bunk check-ins together.

“If there’s any chemistry between people there, it’s going to come out,” she said.

Camp becomes the endless summer — thanks to social media and smartphones

These Jewish summer camps are proud to be basic