WASHINGTON (JTA) — Sen. Bernie Sanders asked David Friedman, President Donald Trump’s nominee to be ambassador to Israel, whether he would back using funds earmarked for assistance to Israel to help rebuild the Gaza Strip.

Sanders in a letter he handed Friedman after they met Wednesday also asked whether he thinks the tax-exempt status of groups that fundraise for settlers should be reviewed. JTA obtained a copy of the letter on Thursday.

The questions in the letter are significant as they suggest the path forward for Israel policy among progressive Democrats. 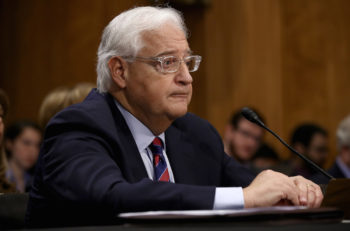 David Friedman testifying before the Senate Foreign Relations Committee on his nomination to be the U.S. ambassador to Israel, Feb. 16, 2017. (Win McNamee/Getty Images)

Sanders has emerged as a de facto leader of progressives following his insurgent but unsuccessful campaign last year for the Democratic presidential nomination. In perhaps the best-received speech over the weekend at the annual conference of J Street, the liberal Middle East policy group, Sanders pushed the theme that pro-Israel Jews need not hesitate to criticize Israeli government policies.

His letter outlines three questions for Friedman: whether he supports a two-state outcome to the Israeli-Palestinian conflict; the appropriateness of an ambassador having deep involvement in the settler movement as a fundraiser and advocate, as Friedman does; and regarding Israeli assistance.

Two states has long been Democratic policy and for 15 years was official U.S. policy until Trump retreated into agnosticism on the issue when he met last month with Israeli Prime Minister Benjamin Netanyahu.

The second two points, however, venture into areas that Democrats have yet to embrace.

“As ambassador, would you take steps to end the flow of donations to illegal settlements, perhaps by supporting the re-examination [of] their tax-exempt status?” Sanders asked.

Sanders also asked Friedman whether “a portion” of the $38 billion in defense aid to Israel over the next 10 years under an agreement signed last year by former President Barack Obama “should be directed toward measures that would facilitate a much greater flow of humanitarian and reconstruction materials” to Gaza.

Aid to Israel in Congress and the pro-Israel community has been sacrosanct, and no president has seriously proposed cutting it since Gerald Ford in the mid-1970s. Subsequent presidents used short delays in delivery of assistance and the amount that the United States guarantees Israel’s loans as means of leveraging pressure on Israel, but assistance has been untouched.

Sanders cast the proposal in part as one that would help secure Gaza by stabilizing the strip. But it comes at a time that Republicans in Congress are proposing cutting assistance to the Palestinians as a means of pressuring them into direct talks with Israel and pushing the Palestinian Authority to end subsidies for the families of jailed or killed terrorists.

Friedman, a longtime lawyer to Trump, did not reply to a request for comment. His ambassadorship is controversial in Congress and in the Jewish community because of his past involvement with settlers, and because of the rhetoric he has used to describe Jews who disagree with him.