Liberman asks US to pull out of UN Human Rights Council 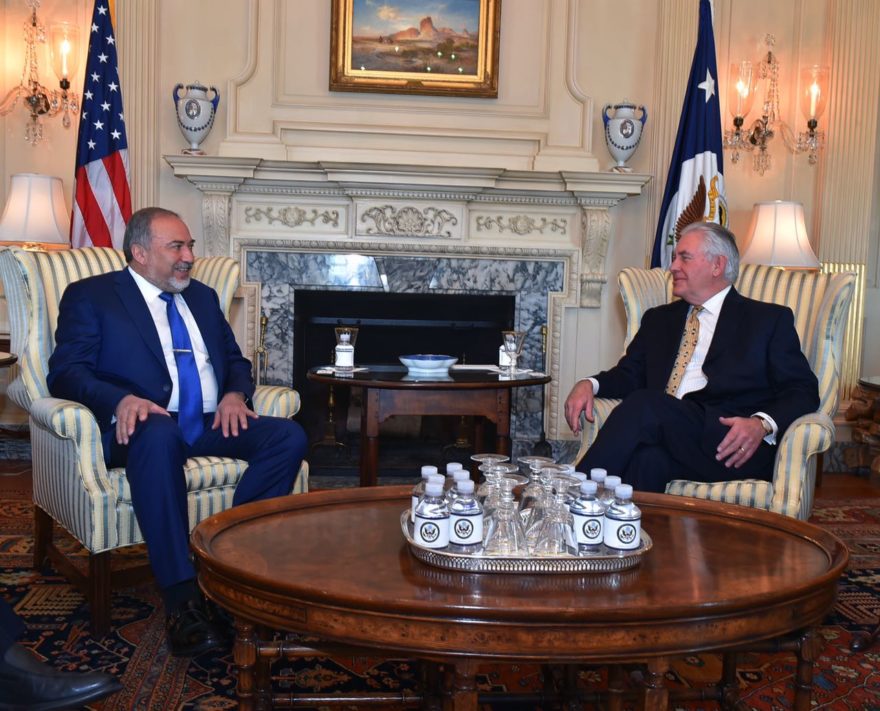 WASHINGTON (JTA) — Israeli Defense Minister Avigdor Liberman asked the Trump administration to pull the United States out of the U.N. Human Rights Council and to conduct a review of UNRWA, the Palestinian refugee relief agency.

The groups “do not fulfill the roles assigned to them,” Liberman told U.S. Secretary of State Rex Tillerson, according to an Israeli Defense Ministry readout of the meeting, which took place on Wednesday in Washington.

Noting the disproportionate attention the body gives Israel, Liberman said the Human Rights Council “defames Israel in attempts to harm her by distorting reality,” according to the release.

“In light of this, Minister Liberman asked Tillerson to consider the possibility of pulling out of the Human Rights Council and to stop funding it, and to review the management and criteria of UNRWA,” the release said.

Liberman’s request came a day after State Department spokesman Mark Toner said there were no immediate plans to pull out of the Human Rights Council.

“We’re at the table, we’re working on an agenda, we’ve been elected to a three-year term I think back in 2016, and we’re committed to human rights and fundamental freedoms and working to pursue those,” Toner said Tuesday.

The Obama administration rejoined the Human Rights Council after the Bush administration withdrew, partly as a means of exerting influence and partly because the U.S. presence might mitigate some of the council’s extremism.

Liberman’s statement did not detail his complaints about UNRWA, which notably stopped well short of asking for a withdrawal of support for the agency. Israel has long viewed UNRWA as fundamentally hostile to its interests, even as it counts on the agency to sustain and stabilize Palestinian areas afflicted by poverty.

Liberman also met with Defense Secretary James Mattis and Vice President Mike Pence during his visit to Washington, as well as with congressional leaders. A key concern for Liberman has been ensuring a high U.S. profile in the region. He has indicated wariness of President Donald Trump’s occasional expressions of isolationism.

“The Vice President and Minister Lieberman agreed on the need to counter threats posed by Iran and its proxies as well as terrorist organizations, and discussed ways in which our militaries can work even more closely together to address shared threats,” said a statement from Pence’s office after their meeting Tuesday. “The two leaders also discussed the crisis in Syria and other regional issues.”

Asked about the department’s role in peacemaking given that Trump’s son-in-law, Jared Kushner, has been named envoy for Middle East peace, Toner said the department is “playing a role.”

“With respect to the connection or how the State Department may be playing a role in the pursuit of Middle East peace, I know that we are working closely with the White House on evaluating where we stand,” Toner said. “I think at this point, we’re still kind of at a stage where we’re looking at the situation and trying to formulate next steps.”

Toner was also queried about the White House’s policy on settlement activity by Israel. After noting that the president had stated publicly that he would like to see Israel “hold back on settlement activity,” Toner said: “I think we’re in discussions with Israel about what exactly that would look like,” he said.

Sean Spicer, the White House spokesman, also put off questions about U.S. policy on settlements, except to allude to Trump’s request, during a meeting last month with Israeli Prime Minister Benjamin Netanyahu, that Israel hold off building for now.

“As we follow up with Israel in the coming weeks, we will have more than that,” Spicer said Wednesday at the daily briefing for reporters.