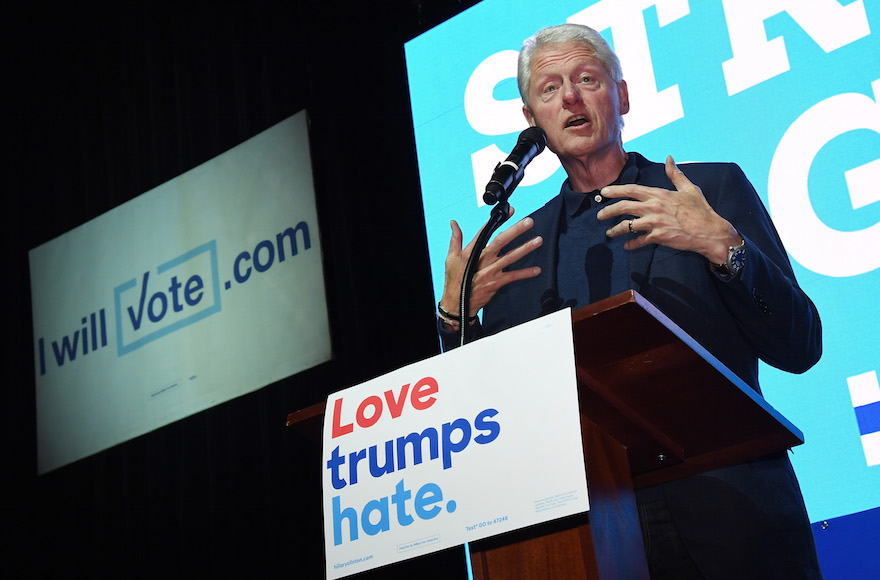 WASHINGTON (JTA) — Bill Clinton cited the incitement against Yitzhak Rabin prior to his assassination as a precedent for increased ultranationalist sentiment today.

In remarks Thursday at the Bookings Institution in Washington, on the occasion of a book launch for Itamar Rabinovich’s “Yitzhak Rabin: Soldier, Leader, Statesman,” the former president said that Rabin was subjected to a “relentless assault on his legitimacy” that presaged the battles raging around the world today.

An extremist Jewish assassin in 1995 murdered Rabin, the prime minister who led Israel into the Oslo peace talks with the Palestinians.

“As the world has grown more interdependent, these identity conflicts have become more intense,” said Clinton, who was president at the time and who regarded Rabin as a mentor. “Once you get into an ‘us and them’ world, then of course nobody should live under the same set of rules, we should have a better set of rules that work for us and not for somebody else.”

Clinton did not name President Donald Trump, who defeated his wife, Hillary Clinton, in the November presidential election. But he appeared to allude to the outlook expressed by Stephen Bannon, Trump’s top strategic adviser, who has spoken of an alliance of economic nationalists who seek to keep immigrants out of their countries.

Rabin’s assassination “prefigured the battle that is raging across the world,” Clinton said, citing the current American political climate as one example, and Britain’s vote to leave the European Union as another. The period around the assassination was a “microcosm” of what is occurring today, he said.

“People who claim to want the nation-state are actually trying to have a pan-national movement to institutionalize separatism and division within national borders all over the world,” Clinton said. “It’s like we’re all having an identity crisis at once — and it is an inevitable consequence of the economic and social changes that have occurred at an increasingly rapid pace.”

After Clinton spoke, Martin Indyk, currently a vice-president at Brookings and formerly the U.S. ambassador to Israel, joined Rabinovich, a former diplomat and peace negotiator, and Dalia Rabin, Rabin’s daughter, in a panel discussion.