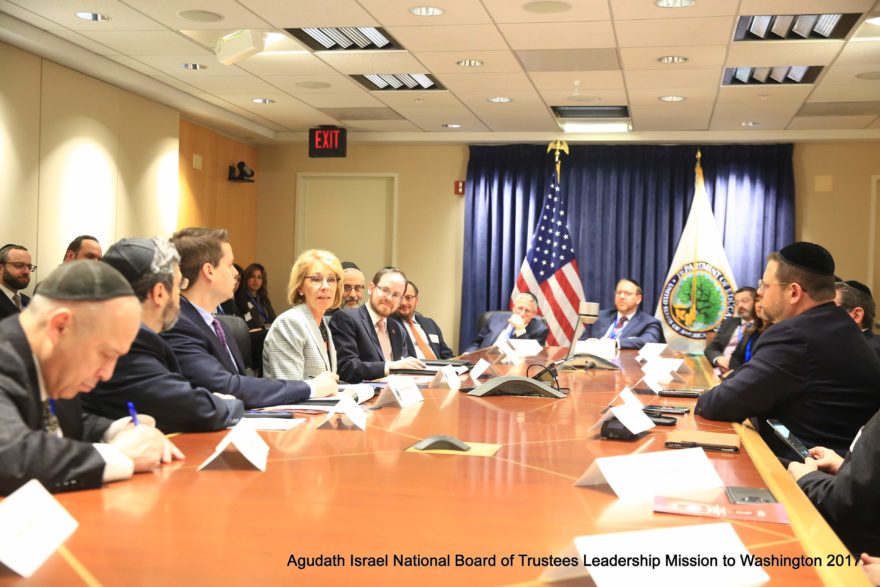 Leaders of Agudath Israel of America meet at the Department of Education in Washington, D.C., with Education Secretary Betsy DeVos, March 8, 2017.  (Shmuel and Dov Lenchevsky)

“I applaud Agudath Israel for their leadership and commitment to providing their community with access to educational options that meet the academic and religious needs of their families,” she said Wednesday after meeting with leaders of the haredi Orthodox Agudath Israel of America at the Department of Education in Washington.

“I look forward to continuing to work with Agudath Israel of America, the Orthodox Jewish community and all who believe that every child, regardless of where they live or their family’s income, should have an equal opportunity to a quality education,” she said.

As a philanthropist who backed public funding for private education, DeVos had worked closely for years with Agudah and other Orthodox Jewish groups.

Secular and more liberal Jewish streams oppose programs like vouchers for private schools, in part to protect church-state separation, and because they argue that it diminishes funding and resources for public schools.