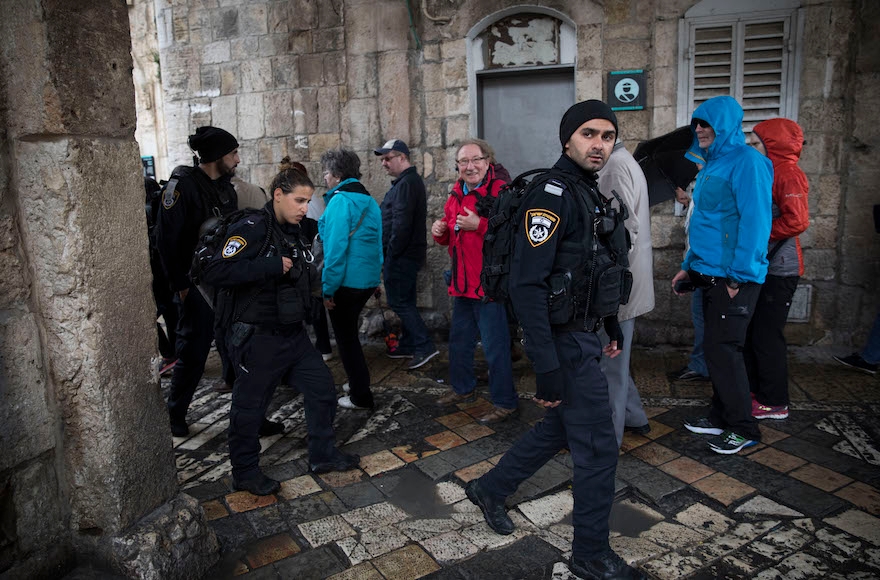 JERUSALEM (JTA) — A Palestinian man who allegedly stabbed two Israeli Border Police officers in Jerusalem reportedly was shot and killed by another officer.

The stabbing took place overnight Sunday at the officers’ post in the Old City near the Lions’ Gate. The officers were taken to a Jerusalem hospital with moderate injuries.

According to the Israel police, police took Matar into the post to be searched after he was stopped at the Lions’ Gate before entering the Old City. Police said he then took out the knife and attacked the officers. Palestinian witnesses told Maan that Matar was carrying a stick and was taken out of the post by a police officer and shot at point blank range.

Early Sunday morning, police raided Matar’s home in the Jabal al-Mukabar neighborhood, arresting four members of his family, identified by Maan as his parents, brother and uncle. A flag featuring the logo of the Hamas terrorist group was removed from the home, according to The Times of Israel.

Jerusalem is under increased security Sunday and Monday due to the Purim holiday, which is observed a day later than in the rest of Israel.