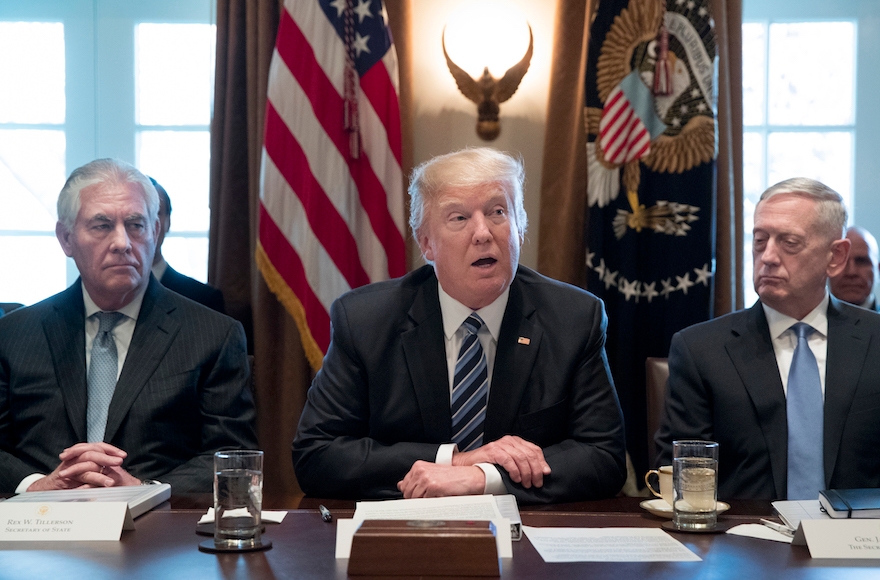 The Anti-Defamation League, the Jewish Council for Public Affairs and HIAS welcomed the Wednesday evening moves by federal judges in Hawaii and Maryland, calling the administration order discriminatory and callous. HIAS, a refugee resettlement agency formerly known as the Hebrew Immigrant Aid Society, was among nine groups and individuals who filed the Maryland lawsuit.

The judges’ rulings blocked the order, which was to go into effect Thursday and would have stopped new visas for citizens from Iran, Libya, Somalia, Sudan, Syria and Yemen for 90 days. It also banned refugees from entering the country for 120 days.

The order, which Trump signed on March 6, was a revised version of a previous order also blocked by federal judges.

Jonathan Greenblatt, the national director of the Anti-Defamation League, called the Hawaii and Maryland decisions “a clear repudiation of anti-Muslim bigotry.”

“The president’s second executive order on refugees was nothing more than the first Muslim ban with new window dressing,” Greenblatt said Thursday in a statement.

The Jewish Council for Public Affairs, the public policy umbrella for Jewish community councils across the country, said in an email newsletter Thursday that it was “relieved” the order had been blocked.

“We believe that our long-standing policies in support of refugees, comprehensive immigration reform, and a pluralistic America are counter to both the order’s intent and direction, and we are relieved that a judge in Hawaii has placed a temporary restraining order on the revised order,” the group said.

HIAS said the “ruling will save lives.”

“While this is a temporary measure, we are pleased that the court has recognized the irreparable harm done to refugees who are prevented from finding safety in this country, as well as to their families here in the U.S. who seek to be reunited with them,” HIAS CEO Mark Hetfield said in a statement Wednesday following the Hawaii judge’s ruling.

HIAS was among a number of groups that gathered  in front of the White House on Thursday to condemn the executive order. Other Jewish organizations that participated in the event were Bend the Arc Jewish Action, J Street, the National Council of Jewish Women and T’ruah: The Rabbinic Call for Human Rights.

Jewish groups, including the ADL, the Reform movement and HIAS, slammed the order when it was released earlier this month.