Jewish groups, pols say Trump budget is bad for Israel and other US interests 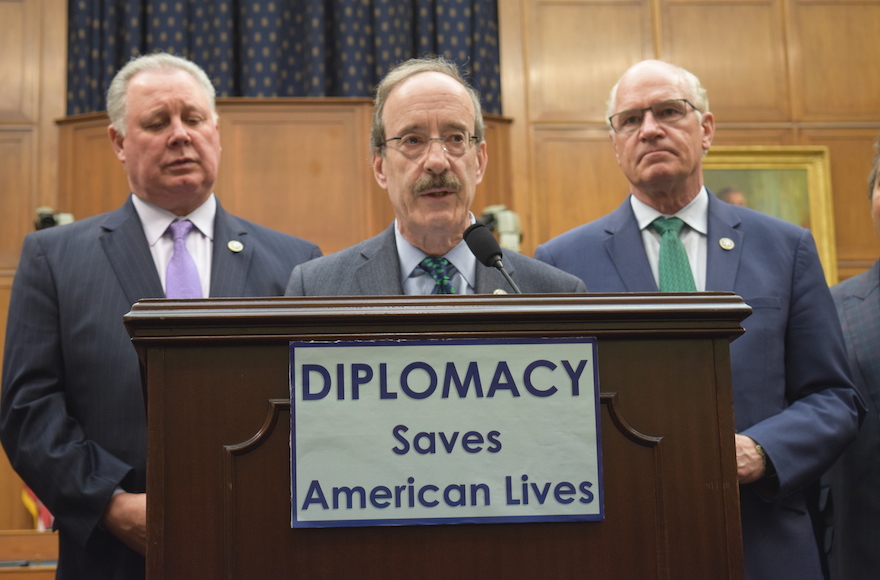 Israel’s guaranteed $3.1 billion defense assistance next year is a “cutout” and not subject to proposed drastic cuts to foreign funding, the Trump administration said.

“Our assistance to Israel is, if I could say, a cutout on the budget, and that’s guaranteed, and that reflects, obviously, our strong commitment to one of our strongest partners and allies,” State Department spokesman Marc Toner said Thursday in a call with reporters.

The reassurance came as an array of Jewish groups and Democratic Jewish lawmakers expressed alarm at proposed 31 percent cuts to foreign spending, saying it would undercut U.S. influence abroad and noting that it currently constitutes just 1 percent of the budget.

“Our consistent position has been that, along with security assistance to Israel, we have always supported a robust overall foreign aid budget in order to ensure America’s strong leadership position in the world,” an official of the American Israel Public Affairs Committee told JTA in an email.

“I wish the president would spend more time talking to the generals because they would tell you that pencils can be as persuasive as cannons and food can be as powerful as a tank,” she said at a news conference Thursday.

“The proposed draconian cuts in areas vital to executing U.S. foreign policy could adversely affect our national security interests by potentially creating more pressure on the American military while essential diplomacy is being undermined,” David Harris, the AJC CEO, said in a statement. “Deep cuts to the State Department, including in key educational and cultural exchange programs, will severely harm America’s ability to assert our interests and values abroad.”

The Reform movement’s Religous Action Center said in a statement that “U.S. interests are deeply entwined with a stable world order and U.S. engagement with the international community is vital to that effort.”

“Over the years, many pro-Israel organizations – including J Street – have argued that Israel cannot be treated as a special case, exempted from cuts to foreign aid while programs affecting the rest of the world are slashed wholesale,” the group said in a statement. “Ultimately, weakening US foreign aid, which is already far below the contributions of other advanced economies in percentage GDP terms, undermines Israeli security as well.”

Next year is the launch of a 10-year agreement that would see Israel receiving an average of $3.8 billion a year in defense assistance.

Centrist and left-wing pro-Israel groups have long argued that overall robust foreign assistance is healthy for the United States and Israel because it sustains U.S. influence.

Toner, the State Department spokesman, fielded a question from a reporter about whether the cuts would affect funding for U.S. defense assistance to Egypt and Jordan – policies that were written into Israeli peace deals with those countries and seen for years as critical to sustaining the peace. Toner deflected the question.

“With respect to other assistance levels, foreign military assistance levels, those are still being evaluated and decisions are going to be made going forward,” he said. “So we’re still at the very beginning of the budget process, and in the coming months these are all going to be figures that we evaluate and look at hard, obviously bearing in mind some of our – or not some of our – our treaty obligations going forward. But we’ll have more details, obviously, when the final budget rolls out in May, I believe.”

Trump administration officials have said programs targeted by the cuts have not proven their efficiency or efficacy, a claim sharply disputed by Democratic Jewish lawmakers and some Jewish groups.

A comprehensive analysis of the budget by the office of Rep. Nita Lowey, D-N.Y., the top Democrat on the House Appropriations Committee, included foreign assistance programs that would be cut.

“Cuts of over 31 percent to International Narcotics Control and Law Enforcement would be a decrease of over $350 million, putting at risk global programs critical to combating transnational crime, terrorism and other illicit enterprises, as well as severely impacting counter-drug activities, which in turn will increase the flow of drugs to the United States,” her report said, citing one of six examples of proposed cuts to foreign assistance.

“We cede the role as the world’s champion of democracy, freedom and justice. And what happens then?” Engel said at a news conference Thursday unveiling the letter. “Who steps into the void? Probably a country that doesn’t share our values or priorities. Think Russia or some other country like that.”

Robert Bank, the CEO of American Jewish World Service, a human rights and anti-poverty advocate, called on the organized Jewish community to rally against the cuts.

“We call on members of the U.S. Congress to oppose this budget, and we call on American Jews and all Americans who are guided by the value of upholding the dignity of every person to oppose President Trump’s proposed radical cuts to the budget,” Bank said in a statement.

B’nai B’rith International, which advocates for international assistance and also focuses on assistance to the elderly in the United States, decried the budgets cuts in both areas. The organization noted a proposed 13.2 percent cut to the Housing Department, which would adversely affect the 38 buildings with 8,000 residents in the B’nai B’rith network.

“Lack of access to safe and affordable housing for all older Americans has deep ramifications for the health and welfare of so many,” it said in a statement.

Reform’s Religious Action Center also singled out proposed cuts to domestic programs in its statement. The budget’s “drastic reduction in funding for critical human needs, environmental protection and international aid programs abdicate the federal government’s responsibility to the American people it serves and others worldwide who depend on U.S. leadership,” its statement said.