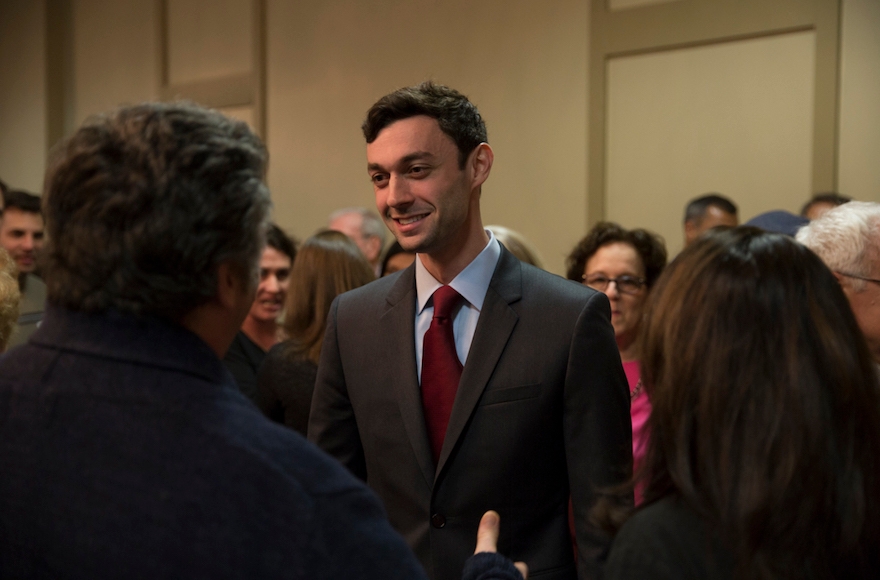 WASHINGTON (JTA) – One candidate has the endorsement of a civil rights giant. Another boasts that he changes his oil in his pickup truck. A third coached soccer at the local community center.

It’s politics as usual in Georgia, except that these three candidates – among the 18 running in the special election on April 18 in Georgia’s 6th Congressional District — are Jewish.

The election is a “jungle,” or “blanket,” primary, an open race in which the top two vote-getters, regardless of party, face off against one another in a June 20 runoff — barring the unlikely event that one candidate tops 50 percent.

Race figures prominently in this election in the Atlanta suburbs, as does traditional values (another candidate is prominent in the right-to-life movement). But all politics is local – attracting jobs to the district and improving mass transit are major campaign themes.

The election is atypical, however, in two ways: Democrats see it as their first opportunity to wound President Donald Trump, and the presence of the  Jewish candidates, notably Jon Ossoff, a Democrat attracting national media attention as the likeliest to pull off an upset.

That one-sixth of the candidates are Jewish in the 6th is something of an anomaly, said Steve Oppenheimer, a businessman who backs Ossoff.

“What are we, 2 percent nationwide?” asked Oppenheimer, who has served on the national boards of the American Israel Public Affairs Committee and Hillel. “If we were twice that here – and that may be a stretch – we [Jewish voters] are not going to be the swing vote.”

Not that Ossoff, a scholarly and serious 30-year-old, is reluctant to chat about his Jewish upbringing if he is asked.

“I was bar mitzvahed at The Temple, which is a Reform synagogue,” he told JTA. “My Jewish upbringing imbued me with certain values, a commitment to justice and peace.”

Ossoff is perhaps best known as a muckraking documentary filmmaker who once was an intern to Rep. John Lewis, D-Ga. — and now is being endorsed by the civil rights giant. (Ossoff was later an aide on national security policy to another Georgia Democrat, Hank Johnson, who also has endorsed him.)

That biography and Trump’s surprisingly poor performance in November in a district that for decades has been solidly Republican has propelled Ossoff to the front of the diverse pack of candidates. A poll commissioned by zpolitics, a website tracking politics in Georgia, had him at 41 percent on Monday, while his closest two contenders, both Republicans, are tied at 16.

Tom Price, the previous incumbent, won the district by more than 20 points in November, but Trump beat Clinton in the district by barely a percentage point. Trump tapped Price to be his health secretary, and Trump’s poor performance led Democrats to smell blood. (Ossoff’s slogan? “Make Trump furious.”)

Ossoff, youthful and personable, soon emerged as a national Democratic favorite, and a fundraising drive led by the liberal website Daily Kos, among other factors, has made him the candidate to beat, with $3 million reportedly in his campaign coffers. The Democratic National Committee and the Democratic Congressional Campaign Committee have deployed resources to his campaign.

That, in turn, has led to coverage in the national media, including front-page treatment in The New York Times and profiles in the New Yorker, Esquire and the Los Angeles Times.

Every one of those treatments includes a requisite skeptical note from impartial observers of Georgia’s politics: Ossoff, they say, is gobbling up Democratic support, and likely will place on April 18, but the notion that he can win in the runoff in the historically red district is far-fetched.

Typical of the pundits is Kerwin Swint of Kennesaw State University, who on Feb. 27 told the Atlanta Journal-Constitution that “a Democrat could conceivably sneak into the runoff, but that Democrat would almost surely lose the runoff. The numbers just aren’t there yet.”

Democrats, giddy at Ossoff’s surge in the polls, believe the numbers are coming in. Ossoff says he’s running to win outright on April 18, although that tends to get even his supporters’ eyes rolling.

Sheri Labovitz, a longtime Democratic activist, has not formally endorsed Ossoff among the five Democrats running, but she believes he has momentum.

“He’s got a machinery working with him that has some very good research, he’s got bodies knocking on doors every day and every weekend,” she said. “If you can turn your voters out, you’ve got a great shot.” 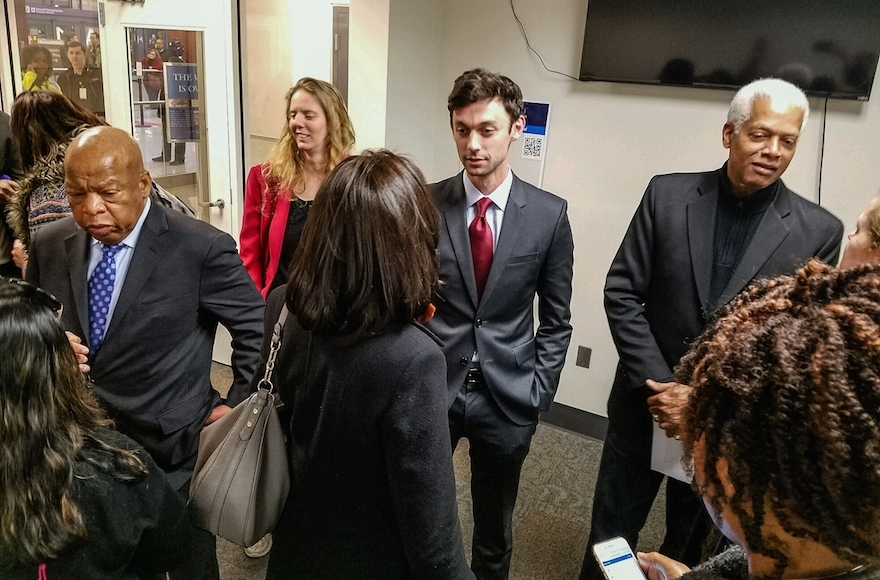 Jon Ossoff, in red tie, is flanked by Reps. John Lewis, left, and Hank Johnson, who are both supporting his candidacy. (Courtesy of the Ossoff campaign)

And Labovitz said Jewish interest is unexpectedly strong. She expected perhaps 30 people to show up last month at a salon she organized for Jewish Democratic women that featured Ossoff and two other candidates: Ron Slotin, a former state senator who also is Jewish, and Sally Harrell, a former state representative who has since withdrawn. Instead, 200 people packed the room.

Ossoff said he was wowed by the turnout.

“Jewish women are leading a lot of the political engagement in the community,” he told JTA.

Still, Labovitz is reserving judgment on a final call until she sees which of the 11 Republicans in the race emerges to compete with Ossoff.

The two Republicans who are ahead in polls would provide a sharp contrast with Ossoff.

Karen Handel earned national notoriety in 2012 when, while she was vice president at Susan G. Komen for the Cure, a charity that combats breast cancer, cut off its relationship with Planned Parenthood.

In the ensuing controversy Komen, which was founded by a well-known Jewish Republican philanthropist, Nancy Brinker, who named it after her late sister, reinstated the relationship with the reproductive rights and women’s health group. Handel then left the organization, becoming something of a hero for abortion opponents.

Bob Gray, a former council member in the town of Johns Creek, has an ad that opens with Trump pledging to “drain the swamp.” It fades to Gray, in overalls, draining a swamp – literally – to the twang of blues chords on an acoustic guitar.

Republican ads target Ossoff as an interloper in a conservative redoubt. The Congressional Leadership Fund, a national Republican political action committee, uncovered video from his days at Georgetown University wielding a light saber as a bare-chested Han Solo and extolling the virtues of beer.

Ossoff says the attack on him by a national superPAC is a signal of how serious his bid is. His current incarnation – clean cut, well turned out and soft spoken, and the CEO of a documentary film company that delves into cutting-edge issues like corruption in Africa and the mistreatment of women by Islamist terrorists – deflects bids to portray him as unripe.

Ossoff is more sensitive to charges that he is a carpetbagger; he lives just outside the district boundaries. That gets him testy.

“My significant other is a medical student at Emory and she needs to walk to work,” he said.

Casting him as an outsider resonates with some voters in a mixed rural-suburban district. Jere Wood, the mayor of Roswell, a town in the district, told the New Yorker earlier this month that Ossoff’s name alone would alienate voters.

“If you just say Ossoff, some folks are gonna think, ‘Is he Muslim? Is he Lebanese? Is he Indian?’” Wood said.

Ossoff likely would enjoy the jab; he wears his progressive badge with pride. He turned up at Atlanta’s Hartsfield-Jackson International Airport on the Saturday night that Trump’s first executive order banning refugees and other travelers from Muslim-majority countries went into effect, and identifies with them as a matter of heritage.

“American Jews all share that immigrant story,” he said, “and that perspective hardens my resolve to fight for an open and optimistic vision of our country where if you work hard you can get ahead, where we welcome those who come here to build the country.”

Ossoff also signals familiarity with the Middle East. His campaign biography notes that when he was at Georgetown, he studied under Michael Oren, the historian and former Israeli ambassador to Washington. Oppenheimer, Ossoff’s backer, says as a congressional aide the candidate helped draft Iran sanctions, but also is quick to note that Ossoff had left the job by the time Democrats were backing the Iran nuclear deal that so riled AIPAC.

“He was not involved in the deal President Obama made,” Oppenheimer said with emphasis.

If Ossoff and his backers are right and distaste for Trump and hard-line conservatism threatens to turn this district blue, then David Abroms would be a formidable adversary in the runoff. But this Jewish Republican is not registering in the polls, finishing next to last among the eight candidates named in the zpolitics poll with under 2 percent of the vote.

Abroms, 33, avoids mentioning Trump in his campaigning. He focuses instead on his business – converting vehicles to running on natural gas – and how he hopes to bring to Washington his ideas of energy independence from the Middle East.

Abroms, who interned for former Alabama Sen. Jeff Sessions, now the U.S. attorney general, is relaxed with both his Southern and Jewish heritages.

“I consider myself a paradox,” he said. “I’m a Jewish accountant, but I drive my pickup truck and I do my oil changes, and I listen to country music.” 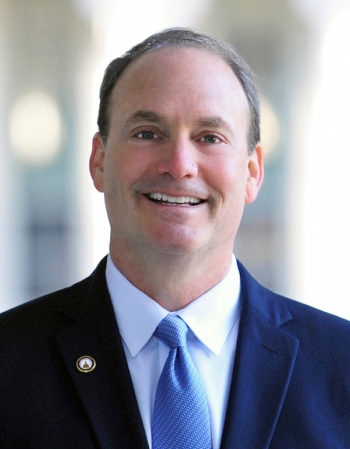 Slotin is another moderate – albeit a Democrat – who likely won’t make the cut. The zpolitics poll, with 625 respondents and a margin of error of 3.8 percentage points, had him just ahead of Abroms at 3 percent. A state senator in the 1990s who ran unsuccessfully against Cynthia McKinney for Congress – McKinney went on to become one of the body’s most strident Israel critics – he is reviving his slogan from that era, “Votin’ Slotin,” and campaigning on bipartisanship and bringing jobs to the district.

Slotin, 54, is an executive headhunter who once owned the Atlantic Jewish Life magazine and coached soccer at a local JCC. He touts his role as part of the government team that crafted tax credits that brought TV and movie production into the state.

The zpolitics poll suggests that might be true: A question asking for a second choice – indicative of how the runoff might play out – had Slotin by far the leader with 34 percent, while Ossoff got 5.6 percent.