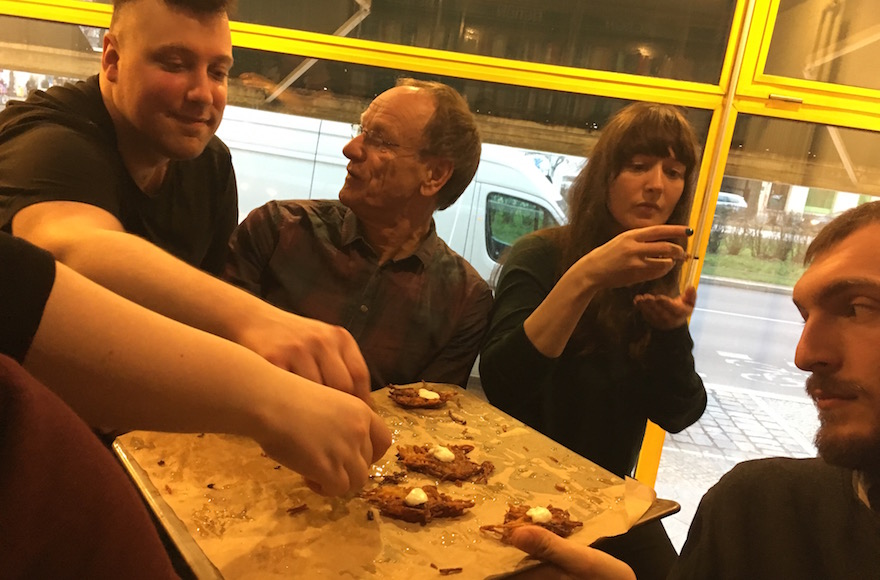 BERLIN (JTA)  — It was standing-room only at Fine Bagels, a bakery tucked inside the Shakespeare and Sons bookstore in the former East Berlin. Bookshelves lined the walls, cafe tables were arranged end to end, and, smack in the middle of the space, sat a large bowl of grated potatoes.

Tonight would be all about Polish-Jewish food, and the crowd was ready.

The event, which attracted some 70 participants, was one of several in the surprise success story of Nosh Berlin Jewish Food Week, billed as the “first-ever Jewish food week” in Germany’s capital. It began on March 17 and runs until the 25th.

“My Nana gave me $1,000” to organize this, said Kratochvil, who came to Berlin six years ago from Prague, where she’d been living since 2007. Her Nana, or grandmother, is Helen Fine of New England, whose recipes (many inherited from her own mother) form the backbone of the bagelry’s menu.

Kratochvil told JTA she thought she’d organize a couple of workshops and a Shabbat dinner. “But it’s become something much bigger,” she said.

Nosh Berlin developed into a multifaceted, week-long adventure in Jewish, or Jewish-style, cuisine, taking place in restaurants around the city. There have been food-related film screenings, lectures, Sabbath dinners and more.

While Nosh Berlin likely is the city’s first such week-long Jewish food festival, Berlin has other popular Jewish food-centric events, like the annual “Kosher-Fest” market, an extravaganza of kosher cuisine hosted by Yehuda Teichtal, a rabbi in Berlin’s Jewish community and head of the Chabad Jewish Educational Center Berlin.

At the moment, Berlin has a handful of kosher eateries, including one inside the Chabad center, as well as Bleiberg’s, a dairy restaurant on Nürnberger Strasse.

Additionally, there are several Israeli and Russian-style eateries scattered across the city, and New-York style bagel cafes, including Barcomi’s, Salomon’s and Fine Bagels. In a city of 4 million — with an unofficial Jewish population of some 30,000 —  these restaurants count on tourists and on the general popularity of Jewish or Israeli food.

Nosh Berlin is another testament to the popularity of such cuisine. Among the highlights of the week: Food from Iran, Morocco, Italy and — yes — Poland.
On Monday evening, Anna Gulinska of the Jewish Community Center Krakow — who is not Jewish herself but may as well be, for all the Yiddish she expertly throws around — gave a lively talk about the similarities between traditional Polish and Jewish foods.

“You can argue about what came first, the Jewish or the Polish cuisine, and at this point you’ll never know,” she joked, pointing out the similarities between ushka and kreplach [dumplings], malishniki and blintzes, hauka and challah.

The Sabbath oven, which Jews would leave on from Friday night through Saturday night, is the “shabbashnik” in Polish to this day, she added.

Kasia Leonardi, who is chef at Krakow’s 9-year-old JCC, demonstrated the preparation of hamantaschen and potato latkes while samples were passed around the crowd. Leonardi is one many Jews in Poland who discovered their roots later in life.

The discussion — which included tastings, of course — concluded to a round of applause. Attendees prepared to head out into the evening, readying themselves for tomorrow’s demonstration: Creative Passover Cooking from Texan foodie Amy Kritzer of the blog WhatJewWannaEat.

But first, a pit stop. Many headed to the counter to pick up some freshly boiled and baked bagels to take home.