These 2 non-Jews are stars of Yiddish theater 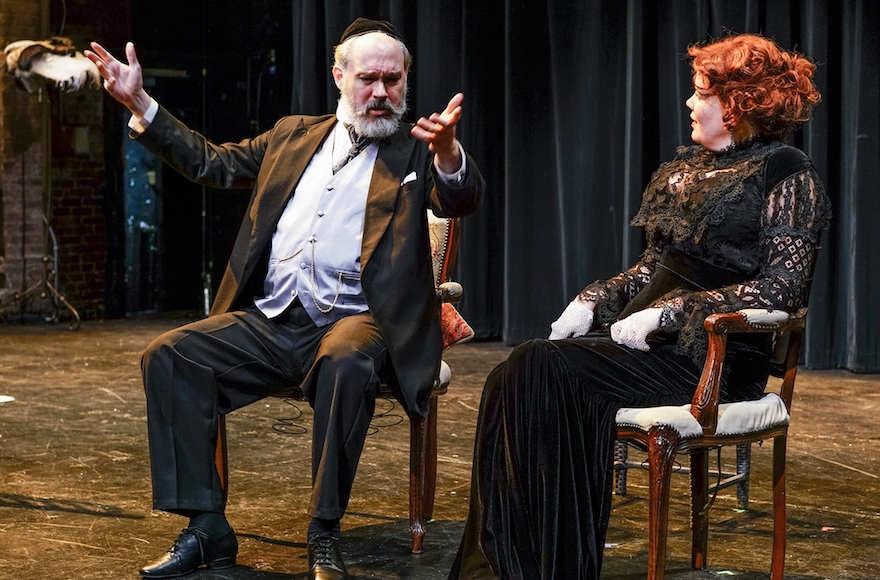 Currently playing to sold-out audiences at New York’s Theatre at St. Clement’s Church, the play — which was first staged in 1906 — still resonates today as a treatise on morality, religion and sexuality.

When Baker brusquely growls, in Yiddish, to his wife, Sarah (played with charm and poise by Caraid O’Brien) about wanting to own a Torah scroll, his words really pack a punch.

But here’s the surprising thing: While Baker and O’Brien are at the forefront of the Yiddish culture and theater scenes, neither actor is Jewish.

Baker, 48, who was raised Episcopalian in Kansas City, has been performing in Yiddish plays since the mid-1990s. He is also the first non-Jewish director of the Congress for Jewish Culture, an organization that brings Yiddish productions to stages around the world. In addition, he teaches a summer workshop on Yiddish theater at the YIVO Institute for Jewish Research here, as well as classes for the Workmen’s Circle, an organization that promotes Jewish culture and offers Yiddish lessons.

O’Brien, 42, grew up in Boston and traces her family’s roots back to Galway and Ireland’s Aran Islands. She has translated multiple Yiddish plays into English (including “God of Vengeance,” although the current production is staged in its original Yiddish) and has taught classes on Yiddish theater history. She is finishing up a book on Seymour Rexite, a former star of the Yiddish stage known for translating pop and Broadway songs into Yiddish, as well as her friend and mentor.

Both Baker and O’Brien admit that people are often surprised to come across non-Jews who are so passionate about Yiddish. Still, both said they see their interest in Yiddish as the same as anyone’s interest in any culture that’s not their own.

“No one gets surprised if a Scotsman studies French or a German studies Russian,” Baker told JTA in a phone interview. “Why should it be such a shock if a gentile studies Yiddish? It’s reflective, in a way, of a sort of inferiority complex regarding Yiddish.”

True as that may be, it’s nonetheless rare these days to hear anyone speaking Yiddish who was not brought up in a haredi Orthodox community. On top of that, Yiddish theater — which hit its heyday during the late 19th and early 20th centuries — is even more of a niche interest. There are only two Yiddish theater companies left in New York City: the New Yiddish Rep, which is behind this “God of Vengeance” production, and the National Yiddish Theater Folksbiene.

Still, if a packed house on a cold Sunday afternoon is any indication, this production of “God of Vengeance,” which is playing through March 26, is finding a receptive audience.

The play is riding the buzz around the upcoming Broadway debut of “Indecent,” written by Pulitzer Prize-winner Paula Vogel, which chronicles the real-life drama that surrounded “God of Vengeance.” When the play arrived in New York in 1923 after success in Europe, it featured the first same-sex kiss in Broadway history — and was subsequently banned after the cast and producer were arrested on obscenity charges.

The fact that several of the actors in this production of “God of Vengeance” were formerly Hasidic has also made waves. 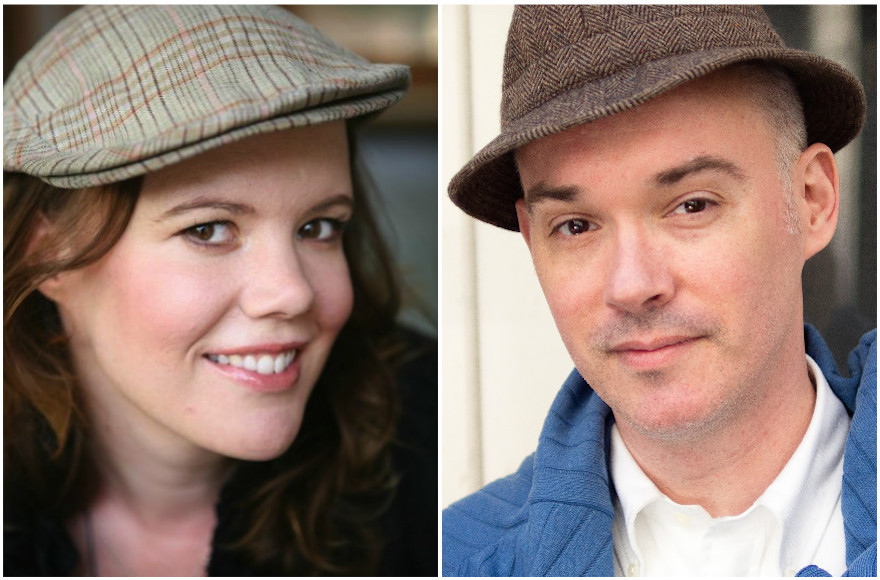 Caraid O’Brien, left, and Shane Baker acknowledge that many people are surprised to learn of their passion for Yiddish theater. (New Yiddish Rep/Jordan P. McAfee)

“When I arrived in the New York theater world, people didn’t know anything about Yiddish theater, or they had this idea that it was some kind of joke, or some kind of schlocky melodrama,” O’Brien said.

When he first began attending Yiddish cultural events, Baker said he was approached by groups of Jewish women wondering whether he would consider converting to Judaism. He later discovered they were using what he called their “shidduchim radar” — meaning they were looking for men to enter arranged marriages.

“We’d have a conversation, in Yiddish, then at the end of the conversation they would say, ‘Do you speak Yiddish?’” she recalled. “They just couldn’t process that that was happening.”

O’Brien said she was first hooked on the language while read the translated stories by the Nobel laureate Isaac Bashevis Singer in high school. She scoured the two shelves of Boston’s public library dedicated to Yiddish literature and became enamored with other Jewish writers such as Saul Bellow, Bernard Malamud and Chaim Grade. She saw connections to Irish literature and culture: a similar quick wit, self-deprecating sense of humor and the sometimes suffocating influence of religion.

O’Brien then studied Yiddish literature at Boston University. During her senior year, while digging in the Yiddish theater archives at Harvard, she stumbled upon work by Joseph Buloff, a former Yiddish theater star. A librarian there suggested she meet with Buloff’s wife, Luba Kadison, who was living in New York.

Kadison, a former star of the illustrious Vilna Troupe — one of the world’s most famous Yiddish theater companies between the world wars —  would  become one of O’Brien’s mentors. The pair would meet weekly to go over Yiddish scripts and talk about their craft.

“I wasn’t really meeting Jewish person to non-Jewish person with Luba,” O’Brien said. “It was artist to artist.”

Baker, too, also was mentored weekly by Kadison. His interest in Yiddish theater was piqued when he saw a Yiddish play in the early 1990s starring Mina Bern. Entranced by her performance, he wanted to talk with her after the show — but language proved to be a barrier. Inspired, Baker decided to learn Yiddish and soon began meeting regularly with Bern, who helped him make connections in the Yiddish theater scene (and introduced him to Jewish delicacies such as tzimmes and tongue sandwiches).

When this “God of Vengeance” run is over, O’Brien will put the finishing touches on her book on Rexite. Baker will get back to adapting Sholem Aleichem stories into humorous plays for the Congress for Jewish Culture. Both will continue pushing for greater appreciation of the language and culture they have grown to love.

“With the right choice of materials and marketing and exposure,” Baker said, “there’s great growth potential for Yiddish culture.”