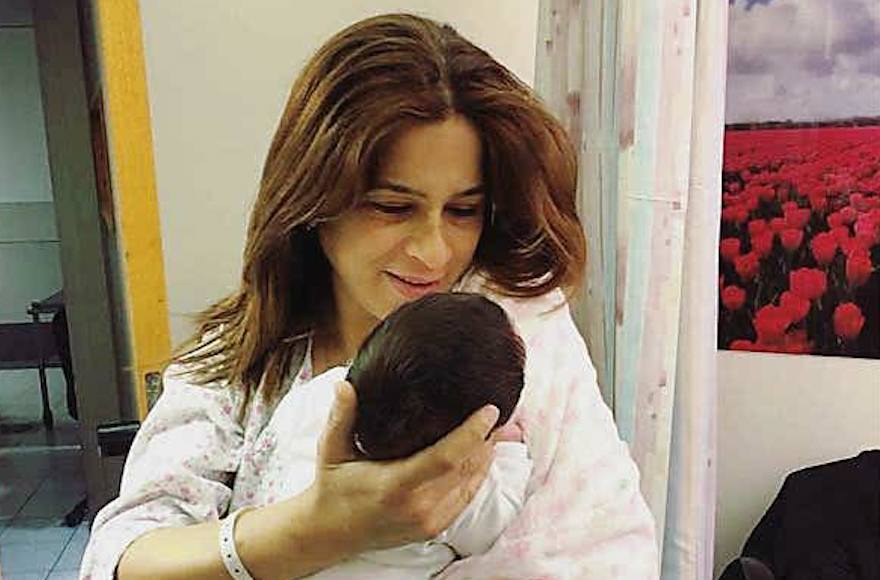 TEL AVIV (JTA) — Israelis welcomed Knesset lawmaker Merav Ben Ari’s announcement that she gave birth to a baby girl, whom she has said she will raise with the baby’s gay father.

Ben Ari, 41, shared the happy news on social media early Sunday, hours after delivering on the first day of the Knesset’s spring break. Alongside a photo of her holding Ariel, her first child, Ben Ari posted a message on Facebook thanking those who have expressed support for her.

“I don’t have much to write except thank you to everyone for all blessing and congratulations on the birth of Ariel our sweetie,” Ben Ari wrote. “Wishing the return to everyone of all the good you wished and even more. A good and successful week to everyone.”

Within a few hours, the post had been liked more than 1,500 times and received several hundred supportive comments, like “What to wish the Knesset’s best voice for mothers?” and “I’m sure the father will also be amazing because otherwise you wouldn’t have chosen him.”

Ben Ari’s post Sunday on Twitter, featuring a photo of Ariel, earned similar well wishes, including from her colleagues.

“Thank you very much to all those who wished me well,” she wrote. “As much as I prepared I did not understand at all until it happened to me. She was well synced with the [Knesset] plenum and on Saturday morning she entered my world, I was moved.”

Yehuda Glick, an Orthodox Jewish Knesset member for the ruling Likud party, responded by writing: “Mazel tov to wonderful Merav on the birth of her charming daughter.”

Ben Ari, an unmarried Knesset member for the centrist Kulanu party, told JTA in October that she had been nervous to go public with her unconventional pregnancy in an interview with Israeli daily Yedioth Aharanoth. But she said the response by Israelis and Knesset members from across the political spectrum had been overwhelmingly positive.

“It’s not easy here because most people know how a family is supposed to look: a mother, a father and children who live together,” Ben Ari said. But “I got really, really good comments about the article, from politicians, from people I know, from people I don’t know.”

“I really want to inspire women not to be afraid of taking this step,” she added

Ben Ari first came to the country’s attention in 2005 when she won the reality show “Needed: A Leader.” With the $1.3 million in prize money, she set up a chain of centers for at-risk youth in the central cities of Netanya and Herzliya, which she ran until being elected to the Tel Aviv City Council in 2013. In 2015, she joined the new Kulanu party and was elected to the Knesset, Israel’s parliament.

Ben Ari and her close friend Ofir, whose last name she did not provide, agreed in writing to try in vitro fertilization together and to raise the child as a team. A 41-year-old finance manager, Ofir, lives down the block from Ben Ari in Tel Aviv and is in a relationship with another man. Ben Ari said she planned to continue looking for love and to return to the Knesset for the start of the summer session in May.