‘Switched at Birth’ gets an interfaith marriage dilemma just right 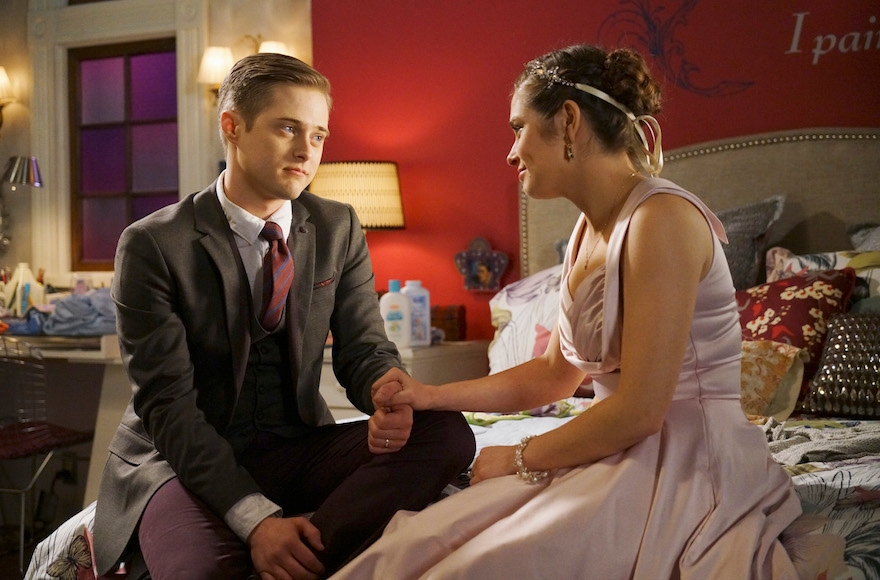 (JTA) — “Switched at Birth” has broken the mold for a show that some might have dismissed as a teen drama.

The series, which premiered on ABC Family (now Freeform) in 2011, is about how two families handle the discovery that their two teenage daughters, Bay Kennish (Vanessa Marano) and Daphne Vasquez (Katie Leclerc), were — as you might have guessed — switched at birth.

But part of what makes the series unique is that Daphne is deaf — and the show often explores deaf culture. “Switched at Birth” employs many deaf actors, and once filmed an entire episode in American Sign Language, with no sound save background noise. The show is trailblazing in other ways, such as how it handled a campus rape case in what one critic called a “realistically messy and fraught” manner.

Now, in its 100th episode, the show has turned its attention to interfaith marriage, as a Jewish mom and Christian father debate what religion to raise their child.

First, a little backstory: At the end of last season, Toby (Lucas Grabeel), the biological son of the Kennishes, and Lily (Rachel Shenton), a British teacher fluent in ASL, had a child, Carlton, born with Down Syndrome. They move to England to be closer to her family, but this season, they returned to Kansas City and had an impromptu wedding.

Since Lily is Jewish, they had a huppah and an interfaith ceremony.

Katherine (Lea Thompson) lets her son Toby know that she wants to schedule a baptism for Carlton. At first, Toby is indifferent, but because it’s important to his mother, he goes along with her plan, and thinks Lily will too, since she isn’t very religious. When Toby brings it up to Lily, she says, “I thought we agreed not to raise him as anything. We’ll just do the fun stuff like holidays.” Toby replies, “We had a blended wedding ceremony and that worked. So Carlton can be both religions, Jewish and Christian.” Lily points out that you can’t be both if you’re baptized.

This is already territory that is seldom explored on television, where interfaith marriage is frequently played for laughs (“The Big Bang Theory,” “The Nanny”) or presents dilemmas no bigger than whether to celebrate Christmas or Hannukah (“The O.C.”)  — which often ends up with an agreement to observe both without even a discussion of what it means to practice two faiths. Seldom do shows address the hard questions that interfaith couples must grapple with, especially when kids are involved.

One scene especially shows how delicately the writers handle the conversations: Hoping to convince Lily to agree to the baptism, Katherine invites her minister to explain the details of the ritual. It backfires. “I just sat there growing more and more uncomfortable. Hearing that reverend say ‘Christ’ a million times, I have never felt more Jewish in my life,” Lily tells Toby afterwards.

Even though she isn’t religious, Lily realizes Judaism is an important part of her identity and she wants that for her son as well. “Jews are defined by being other than. Not Christian. For me you’re either Jewish different from the rest of the world and proud of it or you’re not. And I’m Jewish,” she says.

Even with multiple major story lines to juggle, the writers bring nuance and depth to scenes like these, as when Lily perfectly explains the cultural bond Jews feel towards each other: “We have our own history. Our own language. Our own food. Our own sense of humor. And everyone who is Jewish is bonded by that and I want my son to be in that little circle with me.”

Toby and his parents eventually come to terms with Lily raising Carlton Jewish. but they acknowledge they have a lot of learning to do. Toby says he will be taking some classes in Judaism, and Katherine responds that she will also. Hopefully the series will show them learning more about Judaism before it comes to a close.

The show’s creator Lizzy Weiss, who is Jewish, tweeted, “I am pleased we got to discuss how marriage and parenthood can change your relationship to religion, even culturally.” For that, we applaud her.

I am pleased we got to discuss how marriage & parenthood can change your relationship to religion, even culturally. pic.twitter.com/AsbFb1GutP