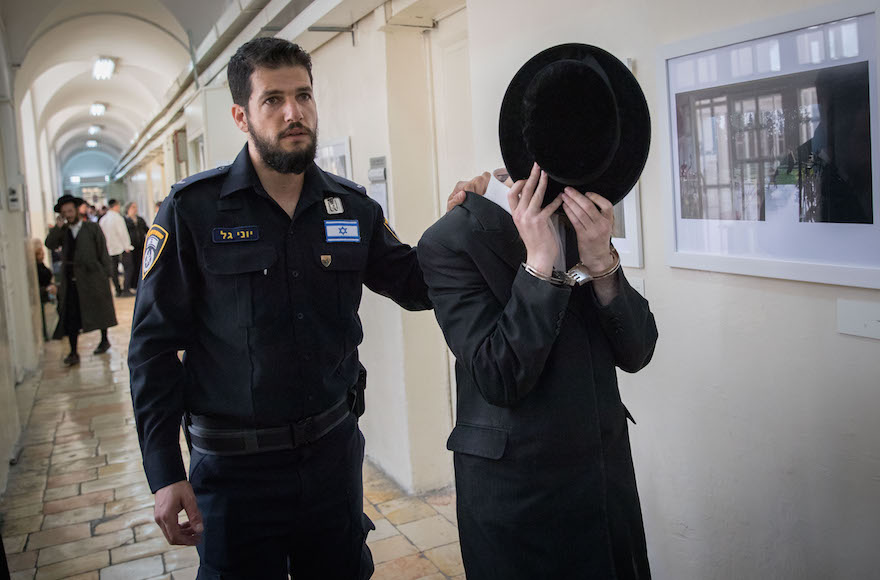 A haredi man arriving for a court hearing in Jerusalem after being arrested for alleged sexual assault, March 27, 2017. (Yonatan Sindel/Flash90)
Advertisement

JERUSALEM (JTA) — Police arrested 22 haredi Orthodox men in four Israeli cities who are suspected of sex crimes against women and minors over the past two years but were sheltered by religious leaders.

The men, aged 20-60, were arrested Monday morning in Jerusalem, Beit Shemesh, Betar Illit and Bnei Brak, all cities with large haredi populations. Residents of the communities tried to prevent the arrests, throwing rocks and other projectiles, damaging some police cars.

The police posted a video showing the arrests on social media.

Police believe haredi leaders helped conceal the crimes and dealt with them on their own rather than reporting them, according to reports. Their investigation revealed that haredi leaders kept written records of the attacks; the perpetrators were required to get therapy within the haredi community. They also were punished internally.

Police reportedly have seized some of those records, which were kept by a person charged with the task by a special committee of the haredi community.

More than 1,000 senior US police officers have visited Israel. Here’s what they learn from Israel’s police force – and why it’s controversial.