White House: Trump was right not to jump to conclusions about JCC bomb threats 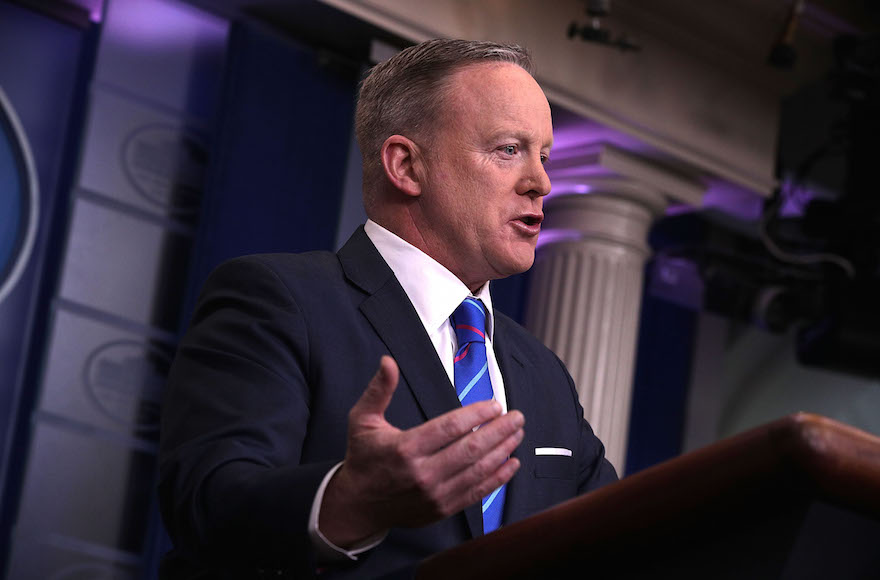 (JTA) — The White House said President Donald Trump had been right not to jump to conclusions about anti-Semitic threats following the arrest last week of an Israeli-American teen on suspicion of making over 100 bomb threats against U.S. Jewish sites.

“We saw these threats coming into Jewish community centers, and there was an immediate jump to criticize folks on the right, and to denounce people on the right and ask them to condemn them, and it turns out that in fact it wasn’t someone on the right,” White House press secretary Sean Spicer said Monday at a media briefing. “The president from the get-go had said ‘I bet you it’s not someone [on the right]’ and he was right.”

Spicer added that “people on the left” who had blamed the right for the threats had not been held accountable.

“In that particular case, we saw that the president was right and that this rush to judgment by a lot of folks on the left was wrong, and none of them have been held to account on that,” Spicer said.

.@PressSec: Pres. Trump was "right" on "rush to judgment" on certain cases of hate crimes. pic.twitter.com/5nxJcLSIRP

Last week, an Israeli-American teen was arrested in southern Israel on suspicion of carrying out bomb threats on Jewish institutions in the United States. The 19-year-old, Michael Kaydar, reportedly used advanced technology and voice-altering equipment to call in the threats to more than 100 JCCs, Jewish day schools and other Jewish institutions in the United States.

Many Jewish groups had blamed white supremacists, emboldened by Trump’s campaign, for the bomb threats that plagued Jewish institutions since the beginning of this year. In February, the president reportedly said that the threats against Jewish communal institutions may be a false flag “to make others look bad.”

Also in February, when asked about the bomb threats, Trump shouted down a Jewish reporter who asked him about what he planned to do to address the intensification of incidents.