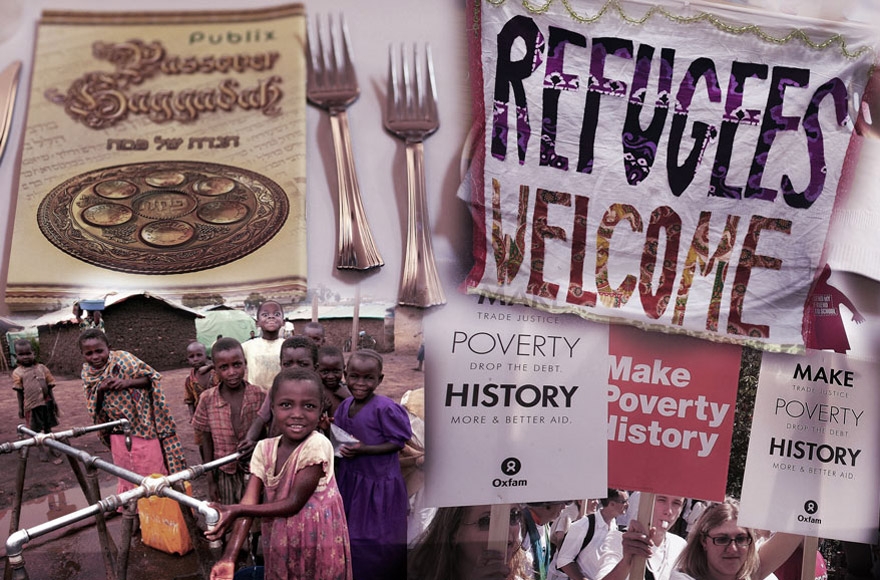 NEW YORK (JTA) — At Passover, Jews around the world gather around their dining room tables to remember their past plight as slaves in Egypt. But the seder can also be a time to learn about the hardships facing others today.

For those looking to incorporate social justice themes into their seders — Passover starts this year on the night of April 10 — there’s no need to look further than these five Haggadahs and supplementary readings. The texts address various social justice issues — from the non-controversial, such as fighting global poverty, to the more politicized, such as calling for an end to Israel’s occupation.

This seder guide draws parallels between the Israelites’ suffering in ancient Egypt to the plight of various groups and individuals in the modern world. The Haggadah touches on issues such as the refugee crisis and genocide, global hunger, poverty, violence against LGBT people and the persecution of minorities.

“When tasting the matzah, the bread of poverty, let us find ways to help the poor and the hungry,” it urges the reader.

Interspersed among the traditional Passover rituals are photos of AJWS beneficiaries from around the world, including children in the Dominican Republic, a family living in a displaced persons’ camp in Burma and an Indian woman who escaped domestic violence.

This supplement, created by the refugee resettlement group formerly known as the Hebrew Immigrant Aid Society, ties the Jewish refugee experience to that of modern-day refugees. Passover rituals are infused with comparisons to their plight: tearing a piece of matzah, for example, is likened to how “refugees across the globe experience the consequences of having their lives ruptured, and, yet, they find ways to pick up the pieces and forge a new, if imperfect, path forward.” Readings about migrants escaping danger and the challenges they face in acclimating to their new homes are provided to accompany the seder.

Here’s another refugee-inspired Haggadah, but with an interesting twist: The International Rescue Committee’s seder supplement (created with the help of HIAS) is inspired by the movie “The Zookeeper’s Wife.” The film (and the Haggadah) is based on a real-life Holocaust heroine, Antonina Zabinska (played by Jessica Chastain), who together with her husband saved 300 Jews by hiding them at the Warsaw Zoo, which the couple ran. The supplement encourages readers to draw on their stories to help refugees today and includes passages modeled on Passover readings. “The Four Heroes,” for example, is meant to be read after “The Four Sons,” and shows four different ways in which people can help refugees.

Holocaust Hero Haggadah by the Foundation for the Righteous

Every year, the Jewish Foundation for the Righteous releases a Haggadah supplement that tells the story of a non-Jew who saved Jews during the Holocaust. This year’s materials tell the story of Master Sgt. Roddie Edmonds, an American soldier who refused Nazi orders to separate captured Jewish and non-Jewish soldiers and thus saved 200 Jewish GIs who no doubt would have been killed had Edmonds complied. The supplement also honors biblical-era non-Jews who rescued Jews, such as Shifra and Puah, Egyptian midwives who disregarded a decree to kill Jewish baby boys, as well as Pharaoh’s daughter, who took in and cared for Moses.

Jubilee Haggadah by Save Israel, Stop the Occupation

The Jubilee Haggadah, created by a new initiative called Save Israel, Stop Occupation and supported by the New Israel Fund, connects the Passover story to a call for the end to Israel’s occupation of the West Bank and Gaza. Named after the biblical concept of a Jubilee year — in which every 50 years all land is returned to its original owners — this Haggadah comes as a precursor to the 50th anniversary of the Six-Day War. It features all the traditional elements of a seder, plus contributions from famous Jewish authors, artists and rabbis, including comedian Sarah Silverman, writer Amos Oz and Women of the Wall president Anat Hoffman.