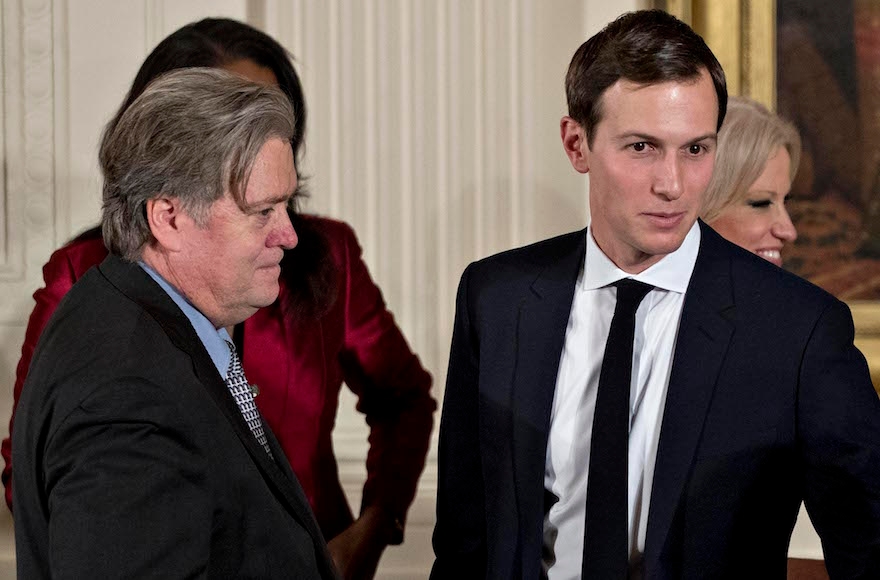 WASHINGTON, DC - JANUARY 22: Jared Kushner, senior White House adviser (C) and Stephen "Steve" Bannon, chief strategist for U.S. President Donald Trump (L) attend a swearing in ceremony of White House senior staff in the East Room of the White House on January 22, 2017 in Washington, DC. Trump today mocked protesters who gathered for large demonstrations across the U.S. and the world on Saturday to signal discontent with his leadership, but later offered a more conciliatory tone, saying he recognized such marches as a "hallmark of our democracy." (Photo by Andrew Harrer-Pool/Getty Images)
Advertisement

“Globalist” refers to theories of a conspiracy of elites to maintain control of the global economy. Its use has overlapped with anti-Semitic theories of Jewish financial control, but it is not a term used exclusively by anti-Semites. Kushner is Jewish.

Before joining the Trump campaign last summer, Bannon helmed Breitbart News, a site that he said was a platform for the alt-right, a loose assemblage of anti-establishment conservatives that includes anti-Semites, as well as some Jews and some fierce defenders of Israel.

News of the tensions between Bannon and Kushner, who reportedly were close during the campaign, follow Trump’s order this week removing Bannon from the National Security Council.

Kushner, according to the reports, believes Bannon went too far in pushing for travelers’ bans and in playing hardball with Congress in an attempt to replace the Affordable Care Act. Both initiatives failed.

Bannon, according to the reports, in turn resents Kushner for bringing into the White House figures associated with Democrats, including Gary Cohn, the former Goldman Sachs banker who is Trump’s chief economic adviser, and Zeke Emanuel, a physician who consulted with the Obama administration on the Affordable Care Act and is the brother of Rahm Emanuel, President Barack Obama’s first chief of staff. Kushner reportedly has hosted three meetings with Zeke Emanuel. Cohn and Emanuel are Jewish.