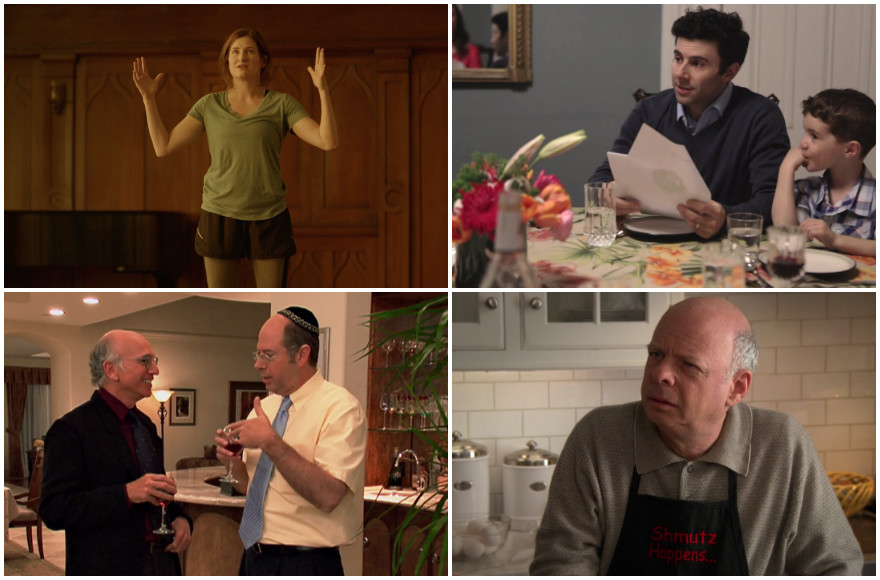 (JTA) — Everyone has their own way of celebrating Passover, from silly seder customs (Ten Plagues finger puppets, anyone?) to enjoying the same meal year after year, to, yes, commemorating the festival alongside beloved TV characters.

The eight-day remembrance of Moses leading the Jews out of slavery in Egypt starts Monday at sundown. If you’re looking for something besides “The Ten Commandments” or “The Prince of Egypt” to watch while you make your seder plans and dig out your kosher for Passover recipes — or if you’re looking to keep up your spirits as the festival drags on — here are some must-watch Passover TV episodes that are just as good as bread.

Where you can watch: Amazon Prime

Why you should watch: The third season of Jill Soloway‘s award-winning series opens with Rabbi Raquel (played by Kathryn Hahn) talking in an empty sanctuary. “Thoughts on Passover,” she says, practicing a sermon. “You wake up. The two words emblazoned on your chest. It’s time. You’re going to make a break for freedom. You will not be a slave anymore. You get out of bed. You grab your things. You run outside. And then there you are. Free.”

While the episode isn’t specifically about Passover, it uses the festival as allegory: The rabbi’s words set the tone for the season — Maura (Jeffrey Tambor) has freedom, but still feels enslaved. Maura is volunteering at a suicide hotline, and in trying to help a girl named Elizah — the similarity to Elijah is not a coincidence — she inadvertently exposes her privilege.

What to watch: “Transparent,” Season 3, Episode 10, “Exciting and New”

Where you can watch: Amazon Prime

Why you should watch: “Transparent” comes full circle this season as the finale depicts the Pfeffermans holding a makeshift seder while aboard a cruise ship. The family hadn’t had a seder in years after a fight at Aunt Bryna’s ended the custom. But Ali (Gaby Hoffman) decides it’s time to have one again; it’s the last night of Passover and she wants to feel connected.

Since they are on a cruise ship, Ali and Sarah (Amy Landecker) must improvise. On their seder plate, saltines stand in for matzah; wasabi serves as bitter herbs, and charoset is made with nuts, raisins and vinegar from the salad bar. The seder itself doesn’t have the happiest of endings — Josh (Jay Duplass) storms off and mom Shelly (Judith Light) declares “she is not at home in this family.”

Still, the episode concludes with one of the best moments of the series so far — Light performing a transcendent solo version of Alanis Morissette’s “Hand in My Pocket” in the ship’s lounge.

Where you can watch: Hulu

Why you should watch: This Nickelodeon cartoon boasts arguably the most famous Passover episode in the history of television. At the very least, it’s probably how many non-Jewish kids learned about the holiday. In the episode, everyone goes to Tommy’s grandparents for a seder. When Tommy’s cousin Angelica complains about not being able to eat cookies, his Grandpa Boris says, “Passover is the greatest holiday of the year,” and tells them the story of Moses freeing the Jews from Egypt.

It’s a pretty accurate retelling, albeit from a baby’s perspective — the Rugrats crew imagines that Pharaoh won’t let the babies go (not the Jews). The episode also provides some moral lessons: Angelica’s mom, for example, tells her Passover is about something more important than presents — it’s about freedom.

What to watch: “Northern Exposure,” Season 3, Episode 6, “The Body in Question”

Where you can watch: The old-fashioned way: on DVD

Why you should watch: It’s really worth tracking down this quirky series about a Jewish doctor from New York who ends up in a small town in Alaska. “Northern Exposure” had many episodes about Joel’s Judaism — for example, there’s one in which he needs to find a minyan to say Kaddish, and another about Yom Kippur.

In this vaguely Passover-themed episode, Joel (Rob Morrow) makes a connection with his ancestors — he dreams about his Polish relatives having a seder and of talking to Elijah. After waking up in a feverish state, he says the Shema and, when his would-be love interest Maggie (Janine Turner) asks him if he knows his name, he gives his Hebrew name.

Where you can watch:  DVD

Why you should watch: This particular episode is notable for showing how the holiday affects interfaith couples: Maggie wants to prepare a Passover seder for Joel, and he doesn’t want her to because she isn’t Jewish and he says it would be like if he did something for Easter (which he wouldn’t do).

But then, Joel has a fishing accident. While unconscious, he imagines talking to his rabbi, who says that denying Maggie Passover is the equivalent to denying her intimacy. Since he can’t (or won’t) have that connection with Maggie, the rabbi advises Joel to find a nice Jewish girl — which he doesn’t do, of course. The show concludes with Joel hosting a seder for everyone in town.

What to watch: “Curb Your Enthusiasm,” Season 5, Episode 7, “The Seder”

Where you can watch: HBO Go, Amazon Prime

Why you should watch: Only Larry David could do a Passover episode about inviting a sex offender to a seder and make it funny. In the episode, Larry starts talking to a “Seinfeld” fan (Rob Corddry) on the street when he tries to buy a newspaper. Larry invites him to the seder when he finds out he has nowhere to go. It doesn’t seem to worry him that his new friend is a sex offender whose face is plastered on posters all over the neighborhood.

When his wife becomes angry at this news, his response is, “Cheryl, he’s a Jew!”

In a nice scene amid all the craziness, we get to see parts of a realistic-seeming seder. We watch Larry hide the afikomen and the children try to find it. But perhaps the most true-to-life detail is that there is a separate table for the kids.

Where you can watch: Hulu

Why you should watch: A glamorous seder isn’t the only reason to watch here. The other big one: Linda Lavin, who guest stars as Sophie, otherwise known as “the Nana.” Nobody can deliver an insult like Lavin, who spouts gems like “Guilt now? Are you sure you’re not Jewish?” to her daughter-in-law.

The episode sees Sandy Cohen (Peter Gallagher) having to host a last-minute seder — including making the kitchen kosher in a few hours — because he lied to his mom and told her he does it every year. It takes a sad turn when Sophie drops the bomb that she is dying of lung cancer. But there is humor in the adorable scenes in which Summer (Rachel Bilson) tries to learn about Passover.

The ending scores points for being a super accurate portrayal of a seder: As ritual follows ritual, Ryan (Ben McKenzie) eventually asks, “Do we eat now?” To which Seth (Adam Brody) responds, “Ryan, we’ve got like six more hours.” We’ve all been there.

Where you can watch: Netflix

Why you should watch: The best thing about “Gossip Girl” episodes about Jewish holidays? They prominently feature Wallace Shawn, who plays Cyrus, stepdad to Blair (Leighton Meester). Bless his heart for trying to keep the seder on track while everyone else is dealing with their typical Upper East Side drama, such as Serena trying to figure out if she accidentally got married in Spain.

The episode features plenty of Blair’s ridiculous lines, such as “I’m one of the chosen ones. I was wandering the Bass-ian desert and now I’ve reached the Vanderbilt promised land,” she said, in reference to her boyfriend upgrade from Chuck (Ed Westwick) to Nate (Chace Crawford). Then there’s this little nugget of a voiceover, when the Gossip Girl herself intones: “Baruch atah, ay dios mio!”

Where you can watch: HBO Go

Why you should watch: At only 10 minutes, this is the shortest show on this list, and the most unusual seder. It’s catered by a pretentious chef who makes organic matzah balls and puts bacon in the soup. Oops — nobody told him there were dietary restrictions. But at least he knows the word “shanda,” which he uses after he realizes his mistake.

The disastrous meal — in which a child opens the door for Elijah and instead is greeted by the “the Guy,” a pot dealer whom the chef called —  will probably make you grateful for your own family. Then again, the kids get $100 for finding the afikomen (on “Curb,” the prize is only $1).