In first for Masbia, soup kitchen opens for seders 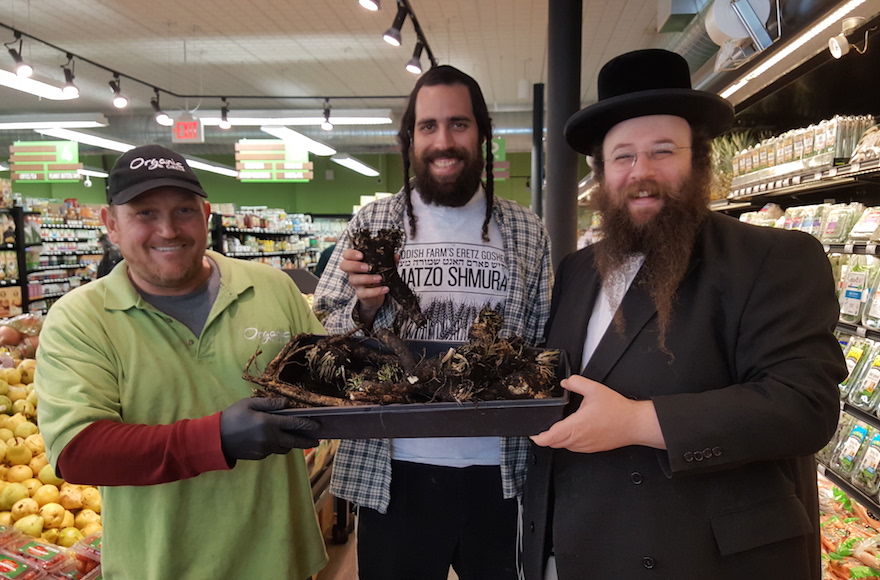 From right to left, Alexander Rapaport, co-founder of the Masbia Soup Kitchen, with Yisroel Bass, director of the Yiddish Farm, and an employee of Organic Circle, an all-kosher organic supermarket in Brooklyn, with organic horseradish for the Seder. (Courtesy of Masbia)
Advertisement

This story is sponsored by Masbia.

NEW YORK — It’s not easy making Passover seder. There’s the cleaning, the cooking, the logistical and emotional challenges of hosting guests. Then there’s the cost.

For some, the challenges are insurmountable.

That’s why Masbia — a soup kitchen in Borough Park, Brooklyn, meant to resemble a restaurant experience — decided this year that for the first time it will open on Passover to host the seders. This despite the challenges of making the facility kosher for Passover and finding volunteers willing to give up the holiday with their own families to help staff seders for the needy. The idea is to give guests not just a warm seder meal but a warm embrace.

“We do not cut corners. We want our guests to feel welcomed by feeding them in a dignified manner, like they are guests at a restaurant,” said Masbia co-founder Alexander Rapaport. “Everybody has a real kiddush cup, a matzah cover, etc. We have handmade shmura matzah, regular matzah — we try to accommodate all kinds of customs.”

A hazzan, Levi Kranz, was hired to lead the seder.

“I could have been in any hotel as a professional cantor,” Kranz said. “But I chose to be here because this is a unique opportunity to hover over and embrace the concept ‘All who are hungry let them come and eat,’” he said, quoting a famous passage from the Haggadah.

“This is the main idea of Passover,” Kranz said. “To be in a place that is a soup kitchen and totally focused on that 24/7 — that’s a very special thing and a new, most beautiful experience.”

Hosting the seders is just a small part of the help Masbia is extending to New York’s poor this Passover. In recent weeks, the organization has distributed thousands of pounds of food for the holiday – something it does every Passover.

One man helping with the distribution, a public servant whose wife recently underwent a kidney transplant, inquired if he could volunteer with his wife during the seders. After speaking with him, Rapaport realized the couple needed somewhere to go for the seder but were too embarrassed to reserve seats as guests. Rapaport immediately invited the man and his family to join for the meal.

“For the past few years we just did big distributions of Pesach food but we closed for the seder” and all of Passover, Rapaport said. “This year, due to the fact that we’ve started doing Shabbos meals at the Borough Park location, we felt like we should continue to do that during Pesach, despite the challenges.”

On Thursday, a single working mother going through a bitter divorce who just managed to regain 50 percent joint custody of her children approached Rapaport. Though she has a decent job, her legal bills have put her under severe financial strain. She and her children will be coming to the seder.

Another seder guest will be a Jewish war veteran whose wife recently died and who is a regular at Masbia. He will be bringing several others with him. 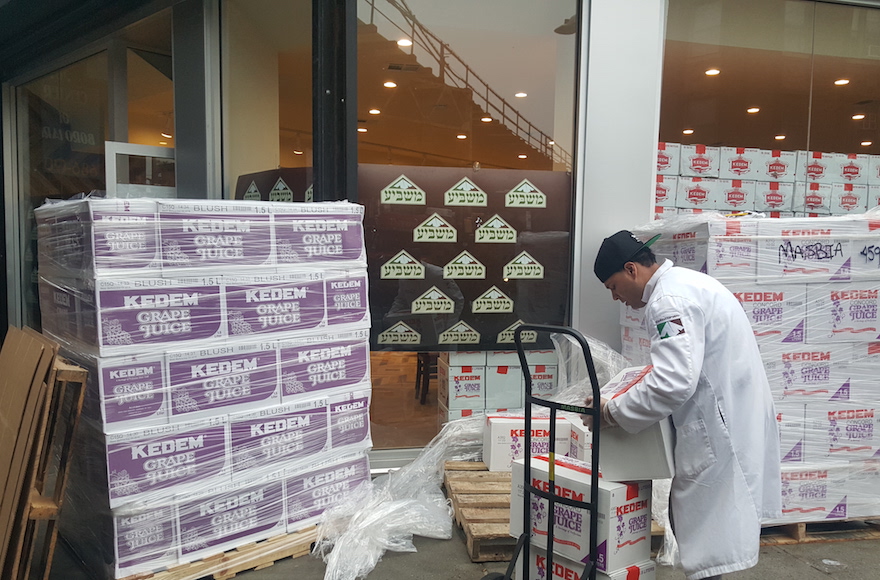 An employee unloading crates of grape juice to be distributed to the needy ahead of Passover at the Masbia Soup Kitchen in Brooklyn, N.Y. (Courtesy of Masbia)

Rapaport and Mordechai Mandelbaum founded Masbia in 2005. In line with their idea of modeling it on the restaurant experience, they eschew plastic folding chairs and serve-yourself warming pans. Instead they installed private tables and have waiters serve the clients and bus their tables. The food is cooked fresh.

The current location was opened late last year following a long renovation. It is nearly twice the size of Masbia’s previous site, which had a maximum capacity of about 40 for dinner.

Though Masbia is kosher and its three branches are in the heavily Jewish neighborhoods of Borough Park and Flatbush, also in Brooklyn, and Rego Park in Queens, the soup kitchens serve any and all comers.

For the seder, the target audience is Jews in need of a hot meal and a place to celebrate the holiday, Rapaport said.

The soup kitchen in Borough Park is located in a neighborhood with over 13,000 poor or near-poor Jewish households, according to Rapaport.

“All seders are for charity,” Kranz said. “You always have all types of people who come to your seder for food. Just this one is specifically focused on people who are poor.”

More than 50 people have signed up for the seder, and more are expected. If the list gets too big for the Borough Park facility, the seder will be moved to a larger venue, a nearby banquet hall.

Masbia has organized a “Charoset fundraising drive” to cover the costs of the seders and Passover meals. Herzog Wine has donated the libations, but the organization is still short on funds. Rapaport is hopeful that enough money will come in before the holiday as Jewish supporters fulfill the Passover mitzvah of “maot chittim” — providing funds to help the needy buy food on Passover.

(This article was sponsored by and produced in partnership with the Masbia Soup Kitchen Network. To help support its seder and other activities, visit masbiaboropark.org/pesach. This article was not produced by JTA’s staff reporters or editors.)