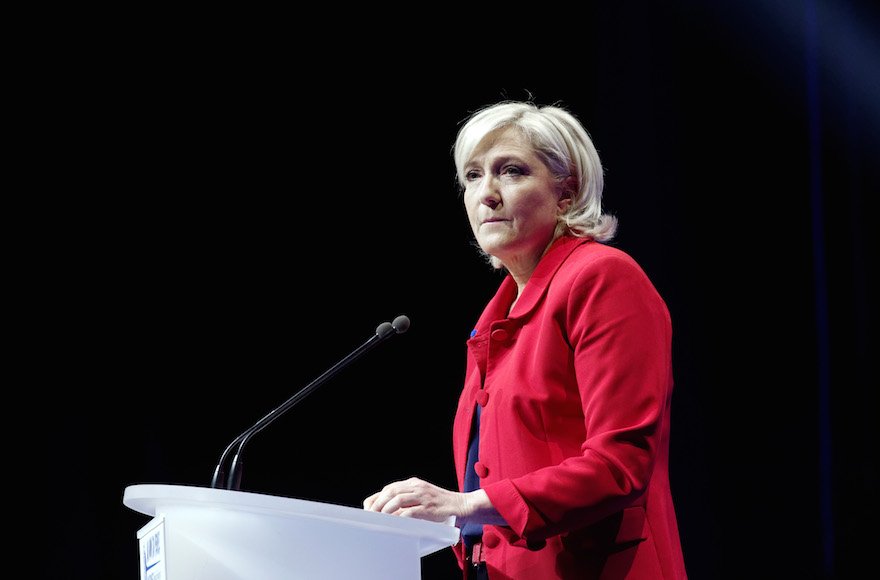 JERUSALEM (JTA) — Israel condemned far-right French presidential candidate Marine Le Pen for saying that her country is not responsible for the deportation of thousands of Jews to death camps in 1942.

“This declaration is contrary to historical truth, as expressed in the statements of successive French presidents who recognized France’s responsibility for the fate of the French Jews who perished in the Holocaust,” Israel’s Foreign Ministry said in a statement issued Monday, a day after Le Pen made the statement during an interview in Paris for the RTL network and Le Figaro daily newspaper.

The ministry’s statement also said: “This recognition underpins the annual events marking the anniversary of the expulsion of the Jews from France and the study of the Holocaust in the education system, both of which are important elements in the battle against anti-Semitism, which unfortunately is once again raising its head.”

Le Pen, the head of the National Front Party who is at or near the top of polls, was asked about the roundup and deportation of 13,152 from the Vel d’Hiv stadium in Paris on July 16-17, 1942, which the Yad Vashem Holocaust museum in Jerusalem defines on its website as “a symbol of the responsibility of the regime and the French nation for the Holocaust.”

Le Pen responded, “I think France is not responsible for Vel d’Hiv,” and added, “I think generally, and in very general terms indeed, if anyone is responsible, then it is those in power at the time, not France as such. It wasn’t France.”

Since National Front was established by Le Pen’s father, Jean-Marie, the party has been accused of espousing anti-Semitism, hatred of Muslims and other forms of xenophobia. The elder Le Pen has been convicted multiple times for Holocaust denial and incitement to hatred against Jews.

Under Marine Le Pen, the party has softened its image, including by kicking out anti-Semitic members like Jean-Marie Le Pen, who was excluded from the party in 2015.

France will hold its presidential vote on April 23. Should no candidate win a majority, a runoff election between the top two candidates will be held on May 7. Le Pen and centrist candidate Emmanuel Macron are the front-runners in the polls.