A futuristic Israeli peace plan — minus the peace 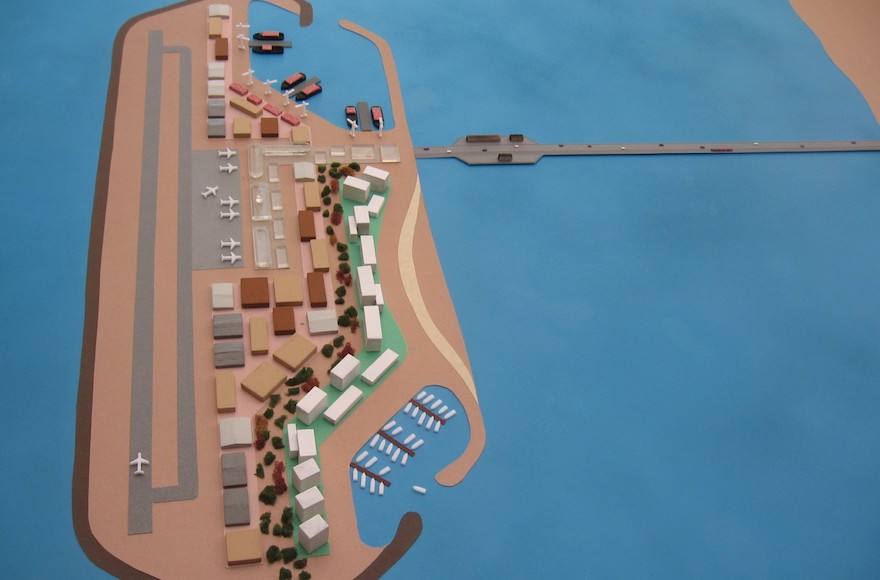 TEL AVIV (JTA) – Gaza is rebuilt. The West Bank is flourishing. And the trains run from Tel Aviv to Riyadh, the Saudi Arabian capital.

This is the peaceful future being pitched by Israeli Intelligence Minister Yisrael Katz. In recent months, he has been shopping around a pair of ambitious economic initiatives that he says could reshape the Middle East to Israel’s advantage: a regional railway system and an artificial island off the coast of Gaza.

“These big initiatives, as opposed to the proposed short-term stopgap solutions, can be game changers,” Katz, who is also the transportation minister, told JTA.”[They] are part of a regional concept or vision which includes three layers: regional security, regional economic initiatives and in the future, based on these first two layers, peace.”

Katz, a leading member of the ruling Likud party who wants to be the next prime minister, is among many right-wing politicians who have argued it is high time for Israel to look past the two-state solution toward other possible futures. But he has distinguished himself with a detailed vision of what could be on the other side – illustrated by maps, graphs and PowerPoint presentations.

Katz has won supporters in high places, including the political right, who praise him for fresh thinking. Some, though, have doubted the initiatives are feasible, and Palestinians and other critics to his left have accused him of putting the cart before the donkey. The regional and international support that such projects would need, they have said, will never be forthcoming unless Israel makes progress toward peace.

Katz presented the railway and island initiatives, versions of which have been floating around for decades, to President Donald Trump’s special envoy, Jason Greenblatt, during his visit to Israel last month. He said Greenblatt expressed openness to the initiatives.

“Advancing economic initiatives in cooperation with countries in the region, with American tailwind and leadership and assistance from other international and regional actors in planning financing and execution, is the best way forward now,” Katz said.

The White House has said it as yet has no position on the initiatives. The Palestinians have not been consulted.

Katz unveiled plans for the railway to journalists last week at the Transportation Ministry in Jerusalem. The initiative would link to Israel’s growing network of tracks eastward to the border with Jordan, which already has railway links to Saudi Arabia. The West Bank would also be included via train tracks through the northern Palestinian city of Jenin, he said. 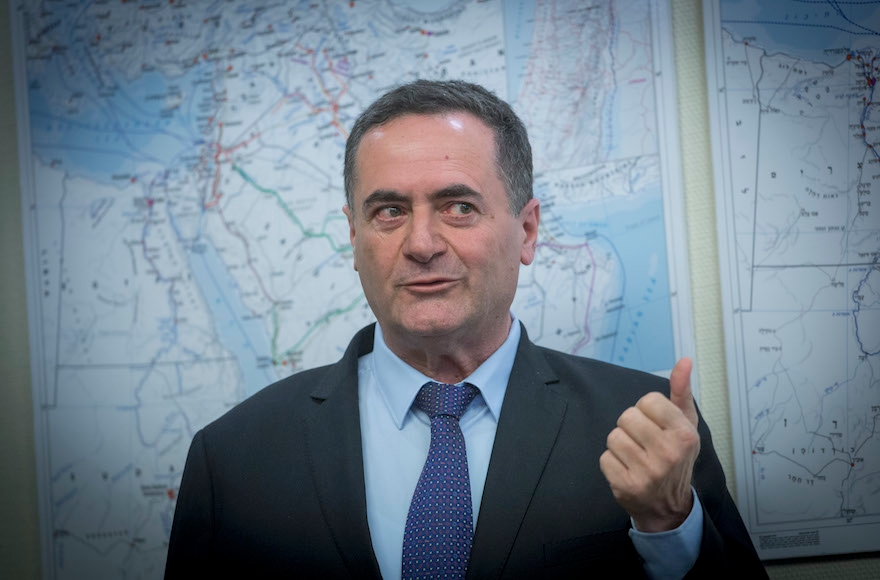 Katz said the railway would bolster economic and strategic ties between Israel and its Sunni neighbors. Also, he said, it would give West Bank Palestinians greater access to regional trading partners other than Israel, and Jordan and Saudi Arabia would earn more secure overland trade routes and access to the Mediterranean Sea. Ideally, the United States would step in to sweeten the deal with political, logistical and economic backing.

As for the island initiative, which Katz has advocated before, unspecified foreign powers would pay for it to be built off the Gaza coast from sand dredged from the bottom of the Red Sea. The island would span 4 square miles and house a commercial seaport along with electricity and desalination facilities. A 3-mile bridge would connect it to the Gaza coast, allowing international authorities to provide security, he said.

After a decade of trade and travel restrictions, he said, the island would answer Gazans’ needs for infrastructure and a portal into the world. It would provide economic and humanitarian relief to the enclave and help prevent another Israeli war in Gaza — there have been three in the past 8 1/2 years.

According to Israeli media reports, senior Israeli defense officials have backed Katz’s island plan. Defense Minister Avidgor Liberman and the Shin Bet security service have reportedly opposed it for security reasons, and other ministers have doubted its feasibility. Benjamin Netanyahu has not embraced either initiative and may not welcome Katz’s growing public profile as the prime minister faces two corruption probes. 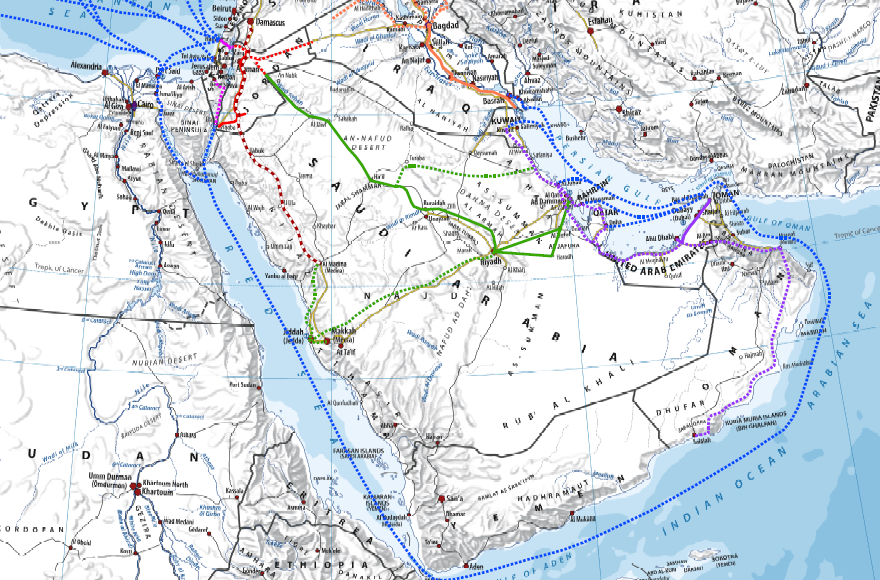 Gabi Siboni, a retired army colonel who provides consulting on military technology, said initiatives like Katz’s are the only realistic way to improve Israel’s relations with the Palestinians.

“There is no chance to move in one step to a final peace agreement,” Siboni, a former commander for the elite Golani Brigade, told JTA. “Only this kind of bottom-up economic development will relax a little the Palestinian economic situation and gain some stability. Maybe one day they will allow for the next generations to move somewhere else.”

Former U.S. Ambassador to Israel Dan Shapiro said he was briefed on the artificial island initiative before leaving his post in January. He described it as a “creative and very promising solution” that could potentially get off the ground even without buy-in from Arab states or Hamas. But he said the Gazan government, be it Hamas or another entity, would have to consent before the island could be opened for business.

“If you developed a plan now to build it and finance it, you could even start the work knowing that to complete it you would need some change of governance in Gaza,” Shapiro told JTA. “The fact that it’s under way would actually become kind of incentive to achieve that change.”

By contrast, Shapiro said, connecting Israel’s railway to Jordan’s would require Arab states to normalize relations with the Jewish state in a way that would only be likely after progress was made on the Palestinian issue.

“While Israel is seen as opposing a two-state solution and an independent Palestinian state, and there’s no progress in that direction, I think politicians will discover there are limits to how much they can advance their country’s integration in the region,” he said. “Those two processes have to move together in parallel, and not in sequence.”

Shlomo Brom, a retired brigadier general and now head of Israeli-Palestinian research at the Institute for National Security Studies, said that while there is some merit to both initiatives, they are at this point distractions from Israel’s unwillingness to make tough compromises. He said there are more realistic ways Israel could help the Palestinians, like using Cyprus as a port or easing freedom of movement in the West Bank.

To take Katz’s initiatives from fantasy to reality, Brom suggested, Israel would have to pay a price.

“The benchmark for seriousness is what you’re willing to pay for it, and the coin we’re expected to pay is flexibility in talks with the Palestinians,” Brom told JTA. “The current government is clearly not willing to use this coin.”