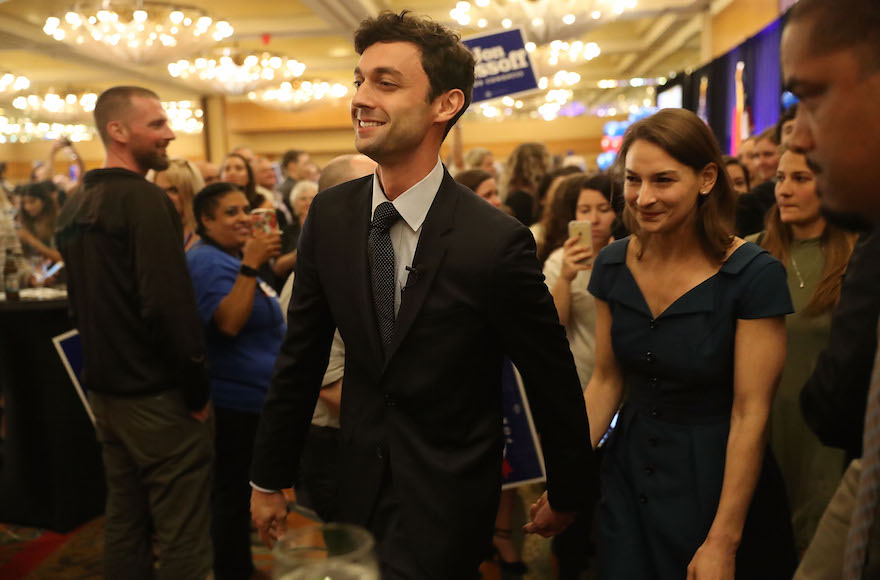 Democratic candidate Jon Ossoff with his girlfriend Alisha Kramer after speaking to supporters in Atlanta, Georgia, as votes were counted in a race in Georgia's 6th congressional district, April 18, 2017. (Joe Raedle/Getty Images)
Advertisement

WASHINGTON (JTA) — Jon Ossoff, a Jewish Democrat, led by a wide margin among 18 candidates in a special election in Atlanta’s suburbs seen as a referendum on Donald Trump’s young presidency, but failed to win it outright.

Trump was heavily invested in the race and in a tweet claimed victory, although Ossoff could still win in the runoff. The 30-year-old documentary filmmaker came out of nowhere to nearly win the seat in the heavily Republican 6th Congressional District.

“Despite major outside money, FAKE media support and eleven Republican candidates, BIG “R” win with runoff in Georgia,” Trump said in a tweet. “Glad to be of help!”

Despite major outside money, FAKE media support and eleven Republican candidates, BIG "R" win with runoff in Georgia. Glad to be of help!

Ossoff, who had predicted an outright victory, nonetheless said the outcome was a win.

“This is already a remarkable victory,” he said in a statement quoted by The New York Times. “We defied the odds, shattered expectations, and now are ready to fight on and win in June.”

Ossoff, also a former congressional staffer, drew endorsements from the national party and from veteran Georgia Congress members, including the civil rights giant Rep. John Lewis, D-Ga., for whom Ossoff once interned.

Price won the district in November with over 60 percent of the vote, but Trump beat his Democratic rival, Hillary Clinton, by barely a percentage point in the district.

Democrats saw an opportunity, and soon the national party, as well as liberal grassroots groups, rallied around Ossoff, pouring upwards of $8 million into his campaign.

Trump in the final days of the campaign appeared to perceive the damage an Ossoff win would do to a presidency scoring historically low approval ratings and with an agenda that has been stymied by the courts and Congress.

The president tweeted multiple attacks on Ossoff in recent days.

“Republicans must get out today and VOTE in Georgia 6,” he said in a tweet posted at dawn Tuesday. “Force runoff and easy win! Dem Ossoff will raise your taxes-very bad on crime & 2nd A(mendment).”

Republicans must get out today and VOTE in Georgia 6. Force runoff and easy win! Dem Ossoff will raise your taxes-very bad on crime & 2nd A.

Ossoff was one of three Jews — another Democrat and a Republican — running Tuesday. He sought support from the district’s Jewish community.