This young chef is trying to make Ashkenazi food cool 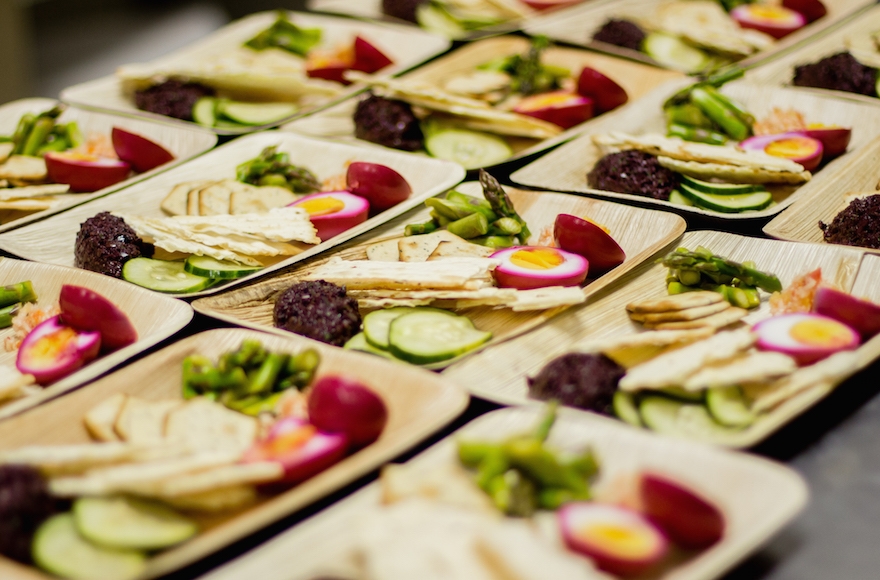 CHICAGO (JTA) — The platter, served during Passover, contained a green, a bitter herb, an egg and matzah. But it was no seder plate.

Instead, it was the appetizer served during a six-course prix fixe meal at Aviv, a pop-up, kosher-for-Passover restaurant housed for one night at Rodfei Zedek, a Conservative synagogue in the Hyde Park neighborhood on this city’s South Side.

The course, a pickle platter, featured pickled cucumbers, pickled asparagus tips and beet-pickled eggs, along with olive tapenade, citrus-carrot horseradish and — de rigueur for a Passover meal — Tam Tam crackers with everything topping. The first course also came with a soft gluten-free matzah that resembled a tea cracker and, as guests noted approvingly, didn’t really taste like matzah.

Aviv had taken over what was usually the synagogue social hall, with guests seated at long tables covered with disposable white table cloths. The courses, served on biodegradable dishes, included a shaved Brussels sprouts salad with lemon-ginger dressing and micro-herbs, as well as whole-roasted spiced cauliflower with seared haloumi cheese, parsley gremolata and marinated Fresno chilies.

The pop-up restaurant was the latest creation of Wandering Foods Productions, a kosher food caterer that aims to create kosher fine dining experiences that fuse traditional Jewish recipes with other cuisines. Wandering Foods is the brainchild of Jonathan Posner, a lanky, 26-year-old rabbinical student with a baritone voice and five years of experience working in upscale Chicago restaurants.

“How to rethink what Passover is like and what it means to eat on Passover” is how Posner, dressed in a black T-shirt with a pinstriped apron, described Aviv as he welcomed 35 people to the first of two sold-out seatings on April 13, the holiday’s fourth night, for $54 a head. “This is a meal and a pop-up restaurant that celebrates spring. The food will be green, the food will be bright and it will be delicious.”

While success stories like Michael Solomonov and Einat Admony may have made Israeli food all the rage in the U.S., Wandering Foods is one of several recent enterprises that are aiming to make Ashkenazi food hip. There’s the Gefilteria, which has resurrected traditional recipes for gefilte fish, horseradish and borscht with an emphasis on local, seasonal ingredients. There’s the Wandering Chew, which creates artisanal Montreal-style Jewish food and conducts culinary walking tours of Mile End, the Canadian city’s Jewish neighborhood, complete with tastings of bagels and smoked meat. Zak Stern, aka Zak the Baker, a kosher deli owner in an artsy Miami neighborhood, makes his sandwiches with fresh-baked sourdough bread. 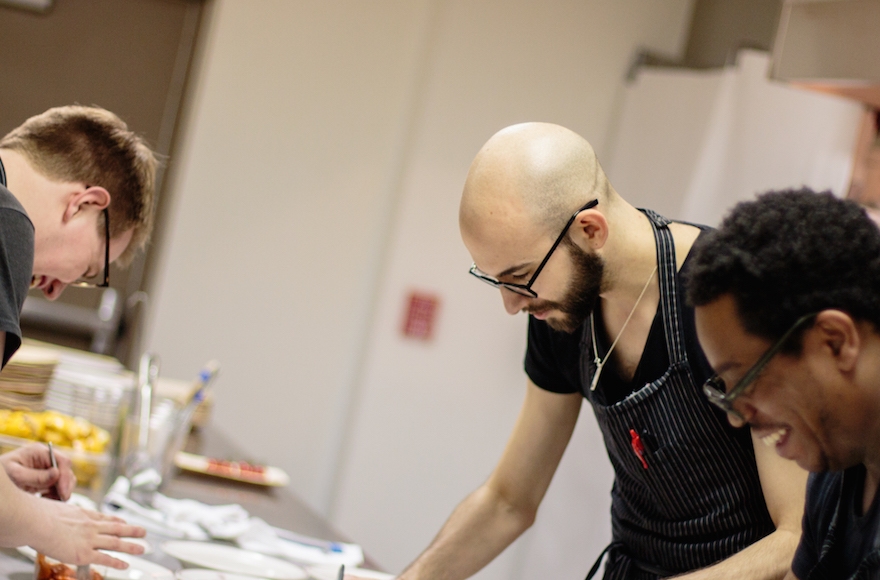 Despite the accolades garnered by these food entrepreneurs, Posner still feels that Ashkenazi foods like brisket and kugel get short shrift. He asks why other international cuisines, from Italian pasta to Chinese stir-fry, have become common in a home cook’s repertoire, but traditional American Jewish food — even among American Jews — is generally relegated to Rosh Hashanah and Passover, if at all.

“The base for most Jews in America is that Jewish food at best is bland, except the one or two things that someone does really well, that someone does once a year,” Posner said. “Jewish food is really holiday food and doesn’t exist in the daily kitchen of most American Jews. In what ways can Jewish food have a cuisine the way we have French cuisine or Italian cuisine?”

According to Liz Alpern, the Gefilteria’s co-founder, she and other Jewish foodies are merging their generation’s culinary sensibilities with Jewish culture. Just like previous generations cared about low-fat diets, these young Jewish chefs are buying their ingredients at farmers’ markets, avoiding processed foods and making sure their dishes have color.

“A lot of people we knew really loved cooking locally sourced, high-quality meat, but when it came to Jewish cooking, like when it came to making a brisket, they didn’t care, really,” Alpern said. “The ways this is different is it’s a coming together of our values as a generation around food, and our love of Jewish cooking and authenticity and tradition.”

Plus, tasty food can be an accessible entry point for many into other modes of Jewish life. More events like this, Posner said, could draw young Jews to large synagogues that may fail to attract them to Shabbat services. David Minkus, rabbi of Rodfei Zedek, which hosted the Passover pop-up, agreed that a synagogue can, for various reasons, be the right place for a Jewish culinary event.

“I thought it was an opportunity to reshape the way people think about having kosher food, how they think about eating in a synagogue,” he said of Aviv. “I didn’t understand why synagogues didn’t use their kitchens, which are usually large, industrial and kosher, to do something beyond serving kugel on Saturday afternoon.”

Posner was raised in an observant Jewish family and was trained as a chef in downtown Chicago’s fancy restaurants. As he returned to Jewish observance as an adult, he knew that working Friday and Saturday nights — the busiest times for restaurants — would prevent him from keeping the Sabbath. So he left the restaurant scene and two years ago founded Wandering Foods. Last year he entered rabbinical school at the Conservative movement’s Jewish Theological Seminary in New York.

In addition to elevating the quality of Ashkenazi recipes, Posner aims to fuse them with other cuisines, from Sephardi dishes to other American and global culinary traditions. The matzah ball soup, for example, included shiitake mushrooms; for dessert, the flourless chocolate cake was accompanied by green tea ice cream and espresso.

“It’s not just a Sephardic-Ashkenazic mashup,” said Posner, who will also be hosting a regular supper club on the Upper West Side of Manhattan beginning in May. “It’s taking specific items, specific techniques, specific ingredients, understanding them in their own contexts and then making something that’s greater than the sum of its parts.”

Posner isn’t sure what he’s going to do after rabbinical school or how long he can sustain Wandering Foods with a full course load. But he said working in a kitchen and behind a pulpit aren’t all that different. In both cases, he said, Posner feels he’s leading “a life in service.”

“People seek out rabbis for a lot of the reasons they go to restaurants,” he said. “They go for the most momentous occasions of their lives. People want experiences. People want to feel cared for.”