Albert Einstein was a sex magnet? 4 surprising facts about the Jewish genius 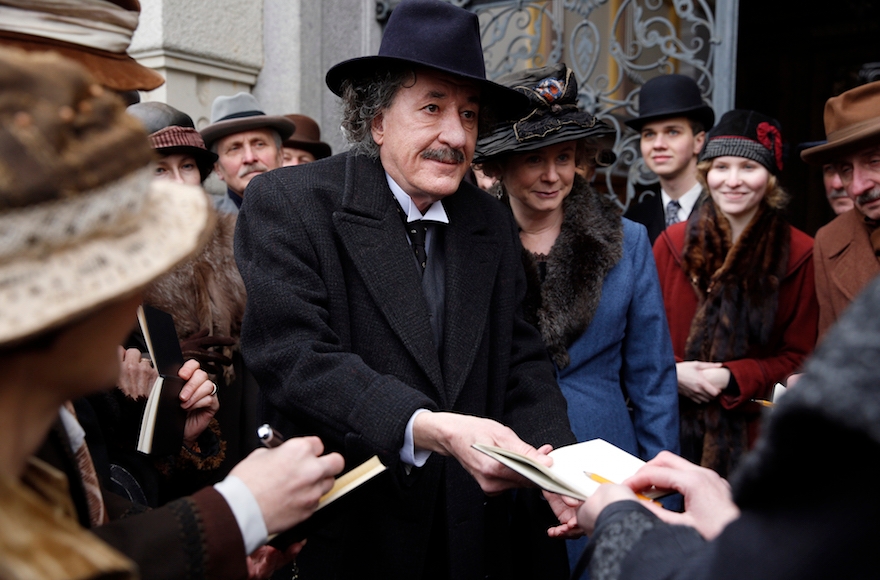 Sex and violence? Not so much.

Then there’s “Genius,” a TV series premiering on Tuesday — National Geographic channel’s first scripted show — that provides a healthy dose of both. Within the first few minutes, viewers witness the bloody murder of a Jewish politician (Einstein’s friend Walter Rathenau) in tense Weimar Germany. The action then shifts dramatically to a 50-something Einstein (played by Academy Award winner Geoffrey Rush), without pants, being intimate with his assistant.

The goal is immediate and obvious: To delve into the personal life — apparently sometimes steamy — of the larger-than-life scientist.

“Albert Einstein is a name and a figure everyone thinks they know, but when I began to dive into his story, I was fascinated by how much was new to me,” Ron Howard, an executive producer of the show and director of the pilot, recently told Vanity Fair. “When you move past his scientific contributions, Albert’s life story — what his youth was like, who his friends were, who his enemies were, his tumultuous love life — is a story people don’t know.”

“Genius” alternates between the scientist’s daydreamy teenage years and the early decades of the 20th century, when the accomplished scientist deals with rising anti-Semitism in his native Germany. The show’s content, which deals with everything from scientific inspiration to young love to sinister Nazi rallies, is rich and compelling — it is Einstein, after all — even if the dialogue occasionally lapses into cliche.

Here are some non-scientific things that viewers learn about the iconic Jewish physicist from the pilot.

When the teenage Einstein (portrayed by Johnny Flynn) opens the booklet for the entrance exam for his dream school, the Swiss Federal Polytechnic in Zurich, he is shocked. He coasts through the math and physics sections, but hadn’t prepared for any other subjects, such as zoology and French. He fails every non-scientific section of the exam and goes to live in Aarau, Switzerland, where he would complete his secondary studies and prepare for his second try at the test. (Don’t feel too sorry for young Einstein, however: He was only 16 at the time and he passed on his second attempt.)

His high school tutor was his first love.

While living in Switzerland, Einstein lived with a teacher, Jost Winteler, and his family. From the second Einstein awkwardly meets Winteler’s daughter, Marie, it’s clear they are headed toward romance. Marie becomes Albert’s tutor and, along with the rest of the Winteler family, expands his mind, introducing him to history, literature and other topics he had previously ignored. Albert and Marie become fast friends and, soon enough, lovers. Alas, the relationship ends with tearful goodbyes when Albert leaves for college.

He married two times — and had several mistresses.

The sex scene near the beginning of the episode was not much of an exaggeration — Einstein apparently got around in his day. The first episode introduces his two wives: Elsa, played by Emily Watson, and Mileva, whom young Albert meets at college in Zurich. But “Genius” demonstrates — along with a trove of letters uncovered in 2006 — that Einstein had multiple mistress over the course of his adult life.

J. Edgar Hoover had the FBI keep tabs on Einstein.

Despite his stubborn insistence on staying in early 1930s Germany, Einstein, fearing for his safety, eventually is forced to leave. He tries to flee to the United States under the guise of a visit to Princeton University, but the American embassy gets suspicious. In a tense scene that feels particularly relevant today, an embassy employee (Vincent Kartheiser of “Mad Men”) interrogates Einstein and wife Elsa about their proposed trip. FBI chief Hoover has been watching him, the agent explains. Hoover and other agencies would continue to watch Einstein for the rest of his life — monitoring his mail, phone calls, even his trash — in part because of his enthusiasm for socialism.