US senators to UN: Treatment of Israel ‘must change’ 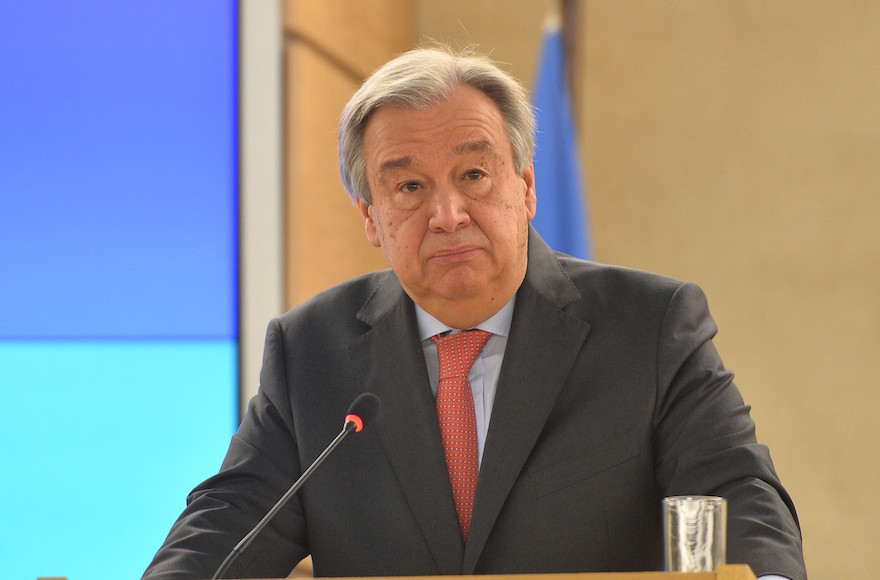 (JTA) — All 100 members of the U.S. Senate signed a letter to the leader of the United Nations urging a comprehensive effort to remedy the organization’s “anti-Israel agenda.”

The letter, which was sent Thursday to Secretary-General Antonio Guterres, praised his recent decision to disavow an anti-Israel report from the U.N.’s Economic and Social Commission for Western Asia and identified four specific areas where further action could be taken to rectify the “unacceptable” treatment of Israel at the world body.

The senators urged Guterres to eliminate or reform various standing committees focusing on issues relating to Israel, press members of the United Nations Educational, Scientific and Cultural Organization to stop advancing measures targeting Israel, reform the U.N. Relief and Works Agency for Palestinian Refugees, and to seek change in the Human Rights Council — in particular the elimination of Agenda Item VII, the only country-specific item on the council’s agenda, which specifically targets Israel.

“Too often, the U.N. is exploited as a vehicle for targeting Israel rather than as a forum committed to advancing the lofty goals of its founders,” the senators wrote. “These actions have at times reinforced the broader scourge of anti-Semitism, and distracted certain U.N. entities from their original mission.”

The letter comes just days after Guterres, in an address to the World Jewish Congress in New York, denounced anti-Semitism and said Israel deserves to be treated at the United Nations like any other country.

“As secretary-general of the United Nations, I can say that the State of Israel needs to be treated as any other state, with exactly the same rules,” Guterres said Sunday.

In their letter, the senators issued no threats regarding funding to the United Nations, though they did note that the United States is the single largest contributor to the organization. Earlier this month, the Trump administration announced it had canceled funding for the U.N.’s Population Fund, which provides family planning and contraception services to women in 155 countries.

“As duly elected representatives of the American people, we take seriously our responsibility to conduct rigorous oversight of U.S. engagement at the United Nations,” the letter said. “We are deeply committed to international leadership and to advancing respect for human rights. But continued targeting of Israel by the U.N. Human Rights Council and other U.N. entities is unacceptable.”

According to The Times of Israel, the letter was authored by Sens. Marco Rubio, R-Fla., and Christopher Coons, D-Del.