Debra Messing bashes Ivanka Trump as ‘one Jewish mother to another’ 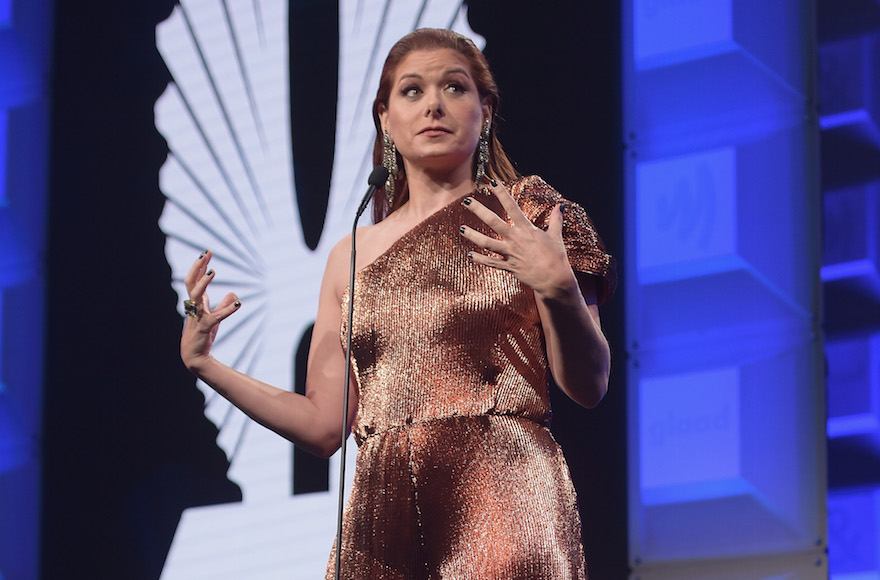 Debra Messing giving a speech while accepting the Excellence in Media award at the the 28th Annual GLAAD Media Awards at The Hilton Midtown hotel in New York City, May 6, 2017.(Jason Kempin/Getty Images for GLAAD)
Advertisement

(JTA) — Tell us how you really feel, Debra Messing.

Accepting an award from GLAAD, an LGBT advocacy group, on Saturday night, the Jewish actress implored Ivanka Trump to stand up to her father, President Donald Trump, on a number of issues, from healthcare to immigration policies to LGBTQ rights,

Messing, who starred on the TV show “Will and Grace,” quipped that Ivanka was secretary of state before calling her out for inaction.

“Ivanka, girlfriend, what are you doing? Come on, it’s me Deb, lets talk for a second, one Jewish mother to another,” she said while accepting GLAAD’s Excellence in Media Award. “It is not enough to simply say that women’s issues are important to you. It’s time to do something.”

Messing also connected the issues in her speech to the themes of the Passover holiday.

“Imagine how you’ll feel sitting at Passover seder if you can tell your children that you fought for justice and freedom. It will make you feel richer than owning all the skyscrapers and golf courses in the world,” she said.

Messing has been a longtime activist, pushing for LGBTQ rights and greater acceptance of the LGBTQ community. As of Monday, footage of her speech was in the top ten highest trending videos on YouTube, with over 350,000 views since being posted on Sunday.

“[P]lease stop blindly defending your father and start defending what you say you believe in. You can’t just write #womenwhowork and think you’re advancing feminism,” Messing said. “You need to be a women who does good work: #saywhatyoumeanandmeanwhatyousay.”

Messing’s video, it should be noted, was met with a flood of ridicule in the comments section. Typical of the backlash (in tone if not in language) was a comment from sfgiantsmadhatter7, who wrote, “The more that Hollywood does this, the more votes Trump will get in 2020. Ivanka will win in 2024.”